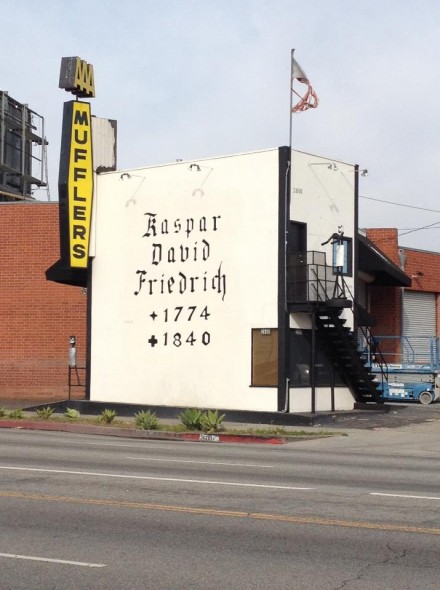 Situated at the top of Culver City’s gallery row where Venice and La Cienega meet is an automotive garage with a new mural of Caspar David Friedrich‘s tombstone epitaph, the work of Berlin-based artist Cyprien Gaillard, commissioned by the Triple A public art project. Next door in a former muffler shop is François Ghebaly Gallery, one of many galleries along this stretch of Los Angeles road, which houses some of the most important gallery spaces in the city and is also one of the most heavily trafficked by commuters.  The outside wall of this former muffler shop-turned-gallery is now the site of Gaillard’s mural, which is the second of eight projects meant to be realized over the next two years by Triple A, a public art project began by Fançois Ghebaly, Emma Gray, Al Moran (co-founder of OHWOW Gallery), Justin Beal, Flora Wiegmann, and Drew Heitzler (Wiegmann and Heitzler also being co-proprietors of Mandrake Bar, the hip Culver City art bar). 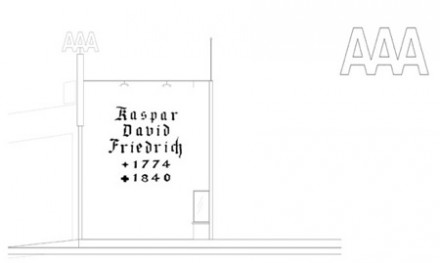 Gaillard’s contribution to the project, a large-scale reproduction of the Friedrich’s epitaph, dislocates the text from a Dresden cemetery and inserts it into a bustling LA intersection, simultaneously paying homage to the well-known painter and bringing to mind the sublime, Romantic landscapes for which Friedrich is revered. In doing so, it calls attention to the differences between the landscape of 21st century Los Angeles and that of 19th century Germany, while also perhaps proposing the LA car culture as, what the press release calls, “the landscape of romance.” Flipping from “romantic landscape” to “landscape of romance,” the piece calls to the foreground how we experience space, as well as how we understand the sublime, or the sublime experience, in contemporary culture.

In commissioning these eight projects the collective seeks to bring contemporary art into the broader public space of Los Angeles street culture in order to explore the possibilities around it as “a new site, a new scale, a new sense of time—in short, the possibility of a new kind of experience,” says Mel Bochner in the press release. In addition to the mural, each artist will also be producing a suite of silk screens in an edition of ten. For more information, contact Emma Gray HQ or François Ghebaly Gallery.

This entry was posted on Wednesday, February 15th, 2012 at 2:08 am and is filed under Art News. You can follow any responses to this entry through the RSS 2.0 feed. You can leave a response, or trackback from your own site.