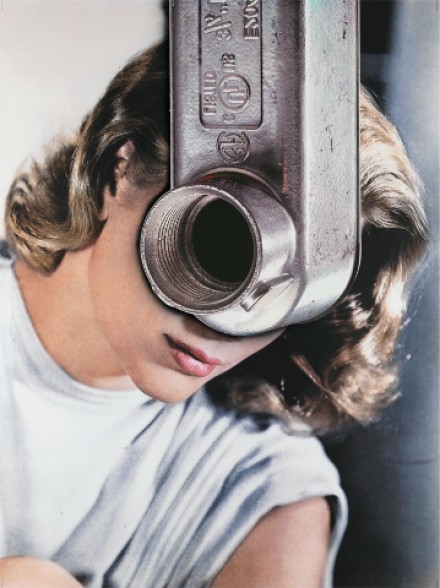 In his first exhibition with Gagosian Gallery Swiss-born, New York-based artist Urs Fischer presents a group of large-scale paintings and sculptures in the exhibition Beds and Problem Paintings. The installation at Gagosian is comprised of three parts: a series of paintings, a duo of fabricated beds, and a grouping of boxes reminiscent of the artist’s 2009 Service à la Française. 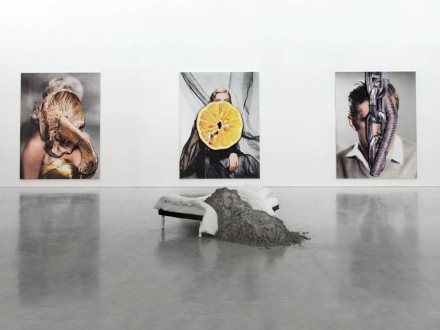 Now infamous for his spectacular installation You (2007) in which he excavated the floor of Gavin Brown’s Enterprise in the West Village, Fischer is known for his uncanny manipulations of objects and space, as well as his attention to scale. As press for the exhibition describes, “he combines daring formal adventures in space, scale, and material with a mordant sense of humor.” Beds and Problem Paintings invites viewers into a space where Surrealism, Pop, and Minimalism merge in an exploration of classical art historical genres like portraiture, still life, and landscape. 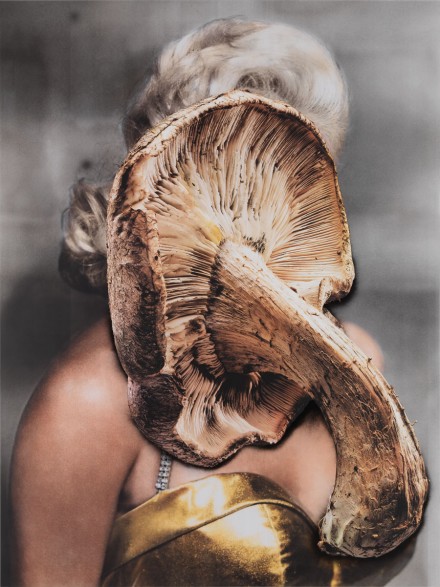 Fischer’s Problem Paintings juxtapose vintage Hollywood headshots and everyday stuff, mostly fruits, vegetables, tools, and pipes. A banana and a beet become stand-ins for the noses of two actors; a mushroom totally obscures an actress’s visage, a metal pipe intrudes on the top half of another actress’s face. In each instance where such juxtapositions occur, the object carries a gesture that replaces rather than obliterates—for example, the opening of the metal pipe becomes a new ocular apparatus, or the beet a new nose. 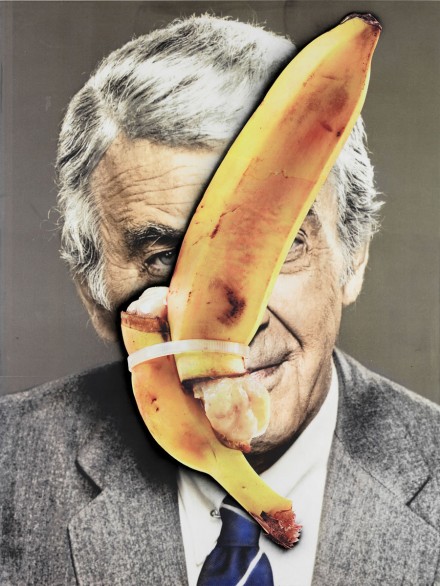 Such everyday objects also appear upstairs in a series of mirrored chrome-steel sculptures. The photographed objects, imaged from each side (top, bottom, front, back, etc.), form a negative space against the slick, mirrored surfaces, simultaneously drawing on a Minimalist past (specifically Robert Morris) and confounding the distinction between image and object, object and environment. 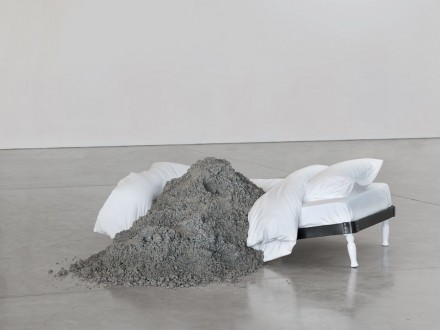 The bed sculptures leave the image behind, manipulating the object through sleight-of-hand material transformations. Untitled (Soft Bed), like the work of Claes Oldenberg, turns the rigid structure soft, collapsing the form in on itself. Similarly, Kratz appears to buckle under the pressure of some invisible force as the mimetically-painted aluminum frame is upended by the weight of concrete. 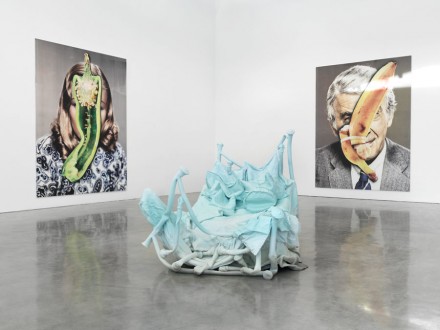 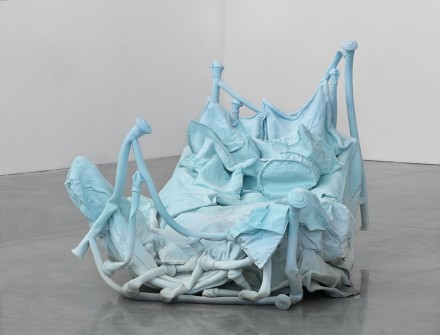 Beds and Problem Paintings captivates viewers, reorienting our perceptual relations to forms and images, turning the everyday into the humorously fantastic.

The oft-injured receiver/return specialist who holds five Buffalo Bills for punt returns agreed to a one-year deal with the Chargers on Tuesday.

Parrish, 5-foot-9, 175-pounds, has had trouble staying healthy the last two seasons but is still one of the more feared punt returners in the league.

Parrish’s 12.1 yard average per punt return ranks sixth in NFL history. Among active punt returners, only the Chicago Bears’ Devin Hester (12.9) averages more yards per return. Of his 11 career TDs, Parrish has recorded three of them on punts.

But he’s had issues staying healthy. Last year, he was placed on injured reserve with an ankle injury after just two games. During his breakout season in 2010 when he showed he could be a reliable slot receiver, a broken wrist ended his season after just eight games in which he had 33 catches for a career-best 400 yards and two TDs. go to site new nfl uniforms

He is the third receiver and second return specialist signed during the offseason by San Diego — joining Robert Meachem and Eddie Royal.

NFL commissioner Roger Goodell suspended Payton for all of next season. Loomis was suspended for eight games, Vitt for six, and the Saints were fined $500,000 and docked two second-round draft picks.

The unusually tough penalties stemmed from an NFL probe which concluded that from 2009-11 the Saints offered improper cash bonuses for big hits that either knocked opponents out of games or left them needing help off of the field.

Payton’s suspension — due to start last Sunday — has been on hold pending his appeal, allowing him to get in a few extra days of work as he rushes to create a plan that’s as detailed as possible for the Saints’ 2012 season.

Beyond the punishment for Saints coaches and executives, the NFL still has to determine whether players who were involved in the bounty program will also be disciplined. web site new nfl uniforms

Speaking at a press event Tuesday for new NFL uniforms created by Nike, Goodell said the NFL met with the players’ association representatives on Monday to discuss the league’s investigation of the Saints.

Goodell added that he expected to speak with NFLPA chief DeMaurice Smith again as soon as today.

“I hope to be able to make some decisions soon,” Goodell said.

According to the league, Saints linebacker Jonathan Vilma offered $10,000 to any New Orleans player who sidelined Minnesota Vikings quarterback Brett Favre during the 2010 NFC championship game. No other players involved have been publicly identified by the NFL.

Saints running back Pierre Thomas, who was modeling his team’s new uniform at the NFL’s fashion show, called possible player suspensions by the league “ridiculous.” —– Fairley arrested MOBILE, Ala. — Authorities say Detroit Lions defensive tackle Nick Fairley has been arrested in Mobile, Ala. on a charge of possessing marijuana.

Mobile police spokeswoman Ashley Rains says Fairley was arrested Tuesday after citizens called to complain that his Cadillac Escalade was speeding through a lower-middle class neighborhood.

Rains says officers smelled marijuana coming from the vehicle and found a small amount in an ashtray. Fairley and a passenger were booked into Mobile’s metro jail facility and released a short time later on $1,000 bail.

Fairley was a standout at Auburn University and the Lions’ first-round draft pick.

The Lions said in a statement they are aware of Fairley’s arrest. The statement says the charges are not consistent with the team’s standards for player behavior and that the team is disappointed.

Harvin revealed the news via Twitter on Monday night, and Vikings coach Leslie Frazier confirmed it on Tuesday while attending a speaking event for his close friend, former NFL coach Tony Dungy. Frazier declined to specify which shoulder was hurt, but he said Harvin sprained the AC joint during the season.

Harvin felt some pain in recent weeks while weightlifting.

This entry was posted on Friday, March 30th, 2012 at 12:01 am and is filed under Art News, Go See. You can follow any responses to this entry through the RSS 2.0 feed. You can leave a response, or trackback from your own site.