Luxembourg: Conrad Shawcross ‘The Nervous Systems (Inverted)’ at MUDAM through May 6, 2012 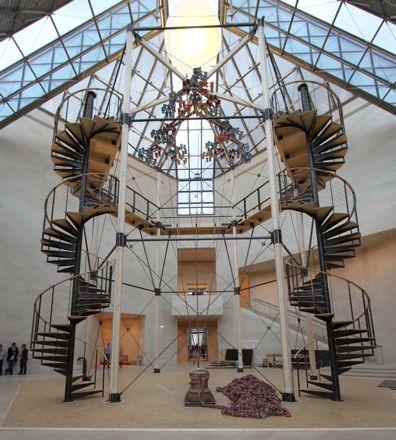 One hundred and sixty two strings slowly wind down from suspended hexagonal structures in the Grand Hall of MUDAM Luxembourg, braiding into a colorful, ever-growing heap on the floor in The Nervous Systems (Inverted) by Conrad Shawcross. The sculpture will be on display and churning out rope though May 6, the latest of Shawcross’s rope machines that he has been creating since 2003, addressing scientific, mathematical, and philosophical concepts with both admiration and an inquisitive eye. 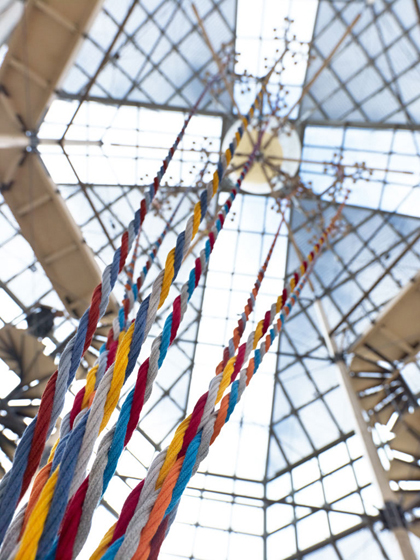 The vast hand-crafted oak mechanism is housed in a tower equipped with a viewing platform with spiraling staircases on either side evoking the shape of a double helix. From the top, hexagonal mobiles of spools unravel thread into coils that converge upon each other at multiple junctures ultimately joining at a focal point near ground level and braiding into a thick, multicolored rope that accumulates in a pile at the base of the structure. 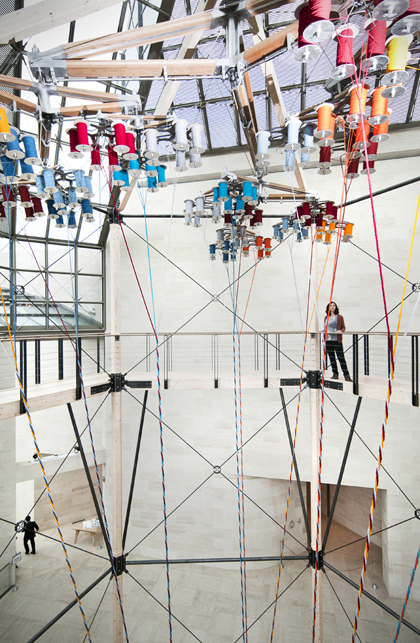 The work is anachronistic; Shawcross draws inspiration from past scientific investigations and the properties of early industrial machines. The massive, hand-produced, and extremely slowly operating device flies in the face of modern machines, which over time have evolved to become smaller and speedier. 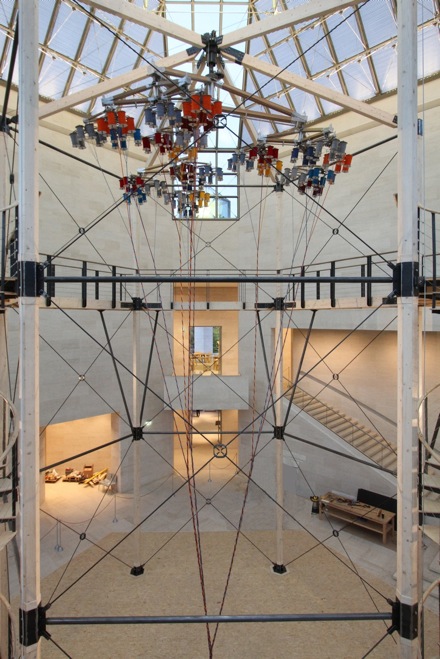 The exceedingly slow pace at which the machine rotates brings into focus the representation of the passage of time, which is the essence of Shawcross’s rope-machine practice. Shawcross notes that the mechanism and its production of rope are a perfect metaphor of time as the machine generates cyclical motions that culminate in a perpetual line, reflecting both possible forms of time, as linear and cyclical. The rope itself acts as a sort of timeline—one can trace any point on the rope to a moment in the show. 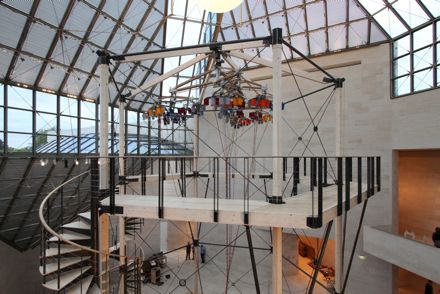 The work is designed with just enough string that spools run out at the conclusion of the show causing the remainder of the string to fall from the suspended structure into the pile of rope. The machine will be left empty, emphasizing a quiet reflection.

This entry was posted on Thursday, March 22nd, 2012 at 12:01 am and is filed under Art News, Go See. You can follow any responses to this entry through the RSS 2.0 feed. You can leave a response, or trackback from your own site.

One Response to “Luxembourg: Conrad Shawcross ‘The Nervous Systems (Inverted)’ at MUDAM through May 6, 2012”