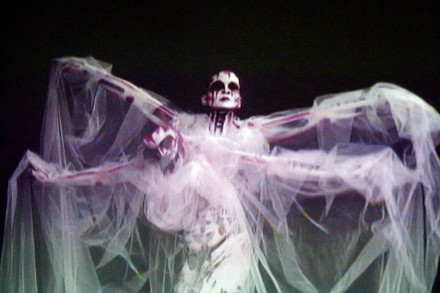 Charles Atlas’ pioneering work in film has evolved since the early 1970s to today, ever re-defining his medium and the field. As Artist in Residence for the 2012 Whitney Biennial from April 18–22, Atlas showcased his recent exploration of live performance, as well as screening Ocean April 11–15, his full-length film of the legendary Merce Cunningham‘s performance at the Rainbow Granite Quarry in Minnesota in 2008. As Filmmaker-in-residence for Cunningham from 1974–83, Atlas explored the technical possibilities of capturing dance on film, conflating time, scale, and angles to create a multi-dimensional viewing experience for a genre whose single viewpoint documentation often drains the piece of its power and effect. Atlas is the self-proclaimed inventor of ‘mediadance,’ a genre of performance conceived exclusively for video broadcast, demonstrative of his active engagement with performers. Known for his collaborative work with performance artists such as Marina Abromovic, Leigh Bowery, Michael Clark, Douglas Dunn, Yvonne Rainer, Mika Tajima and New Humans, Atlas states, “the essence of my work resides ultimately in the relationships that develop with my subjects and my collaborators.” 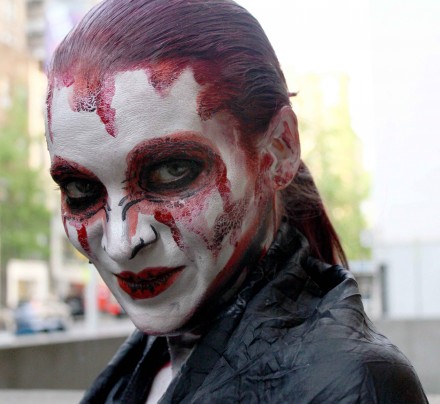 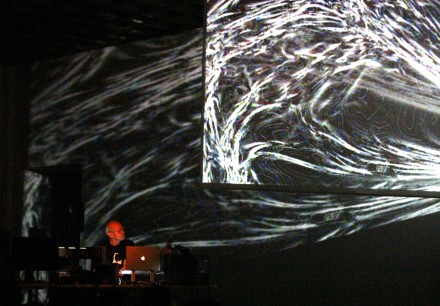 The fourth floor performance space was set up with a large projection surface flanked by two angled translucent screens, through which Atlas’ video was cast onto the walls behind it. Atlas sat at a desk piled high with monitors and technological paraphernalia, across from William Basinski, stationed at his own computer with musical accoutrements. Roped off to the right of this central viewing area, Johanna Constantine emerged from behind a dark enclosure in full body paint, and performed for two cameras streaming directly to Atlas’ computer, edited and projected in real time onto the hanging screens. 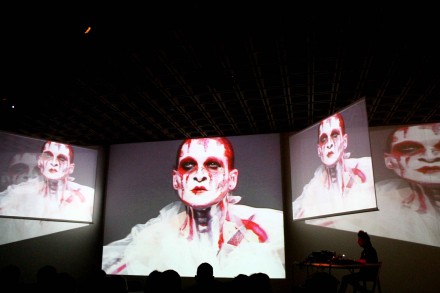 Painted with skeletal-like black and white markings, her face dripping with the blood red dye from her long matted braid, nude save for the metal plates seemingly sutured to her body, Constantine stared penetratingly into the cameras while rhythmically swaying in repeated motions, both graceful and contorted, to the haunting audio from Basinski. She appeared as a demonic creature, flapping her robotic wings in slow, deliberate movements, first in a veil, and later in a metallic mask. 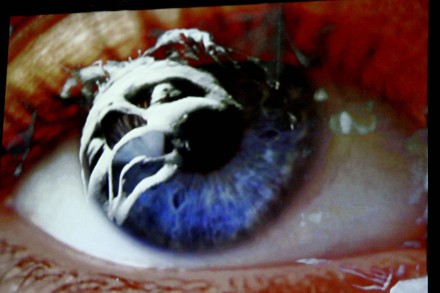 Atlas transformed this eery dance into a wholly new vision on the screens, layering footage from the cameras with black and white clips from old movies, amorphous patterns of light and color, flashing stills and cosmic starscapes. Atlas manipulated the film of Constantine, alternating between black and white, color negatives, close ups, full-length body shots, and a variety of angles, overlapped and undercut in a mesmerizing palimpsest—a visual assemblage tuned to both music and dance. He layered streams temporally, casting a twin figure two beats behind on the same visual plane, at times appearing like a Hindu multi-armed goddess, or a glowing shadow dancing behind her. His inventive editing affected a disintegration of time and space, strikingly evident alongside the video’s source material seen in the flesh. This juxtaposition of live dance performance and its cinematic presentation in real time illuminated Atlas’s achievement in film. 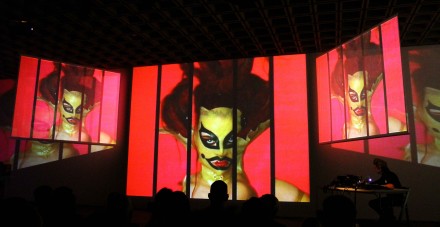 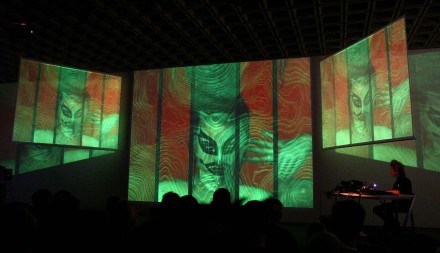 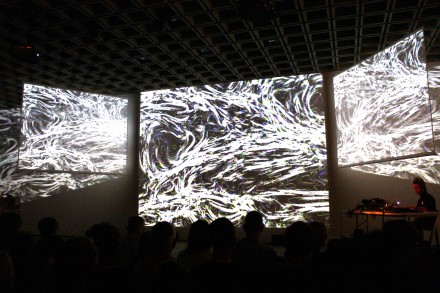 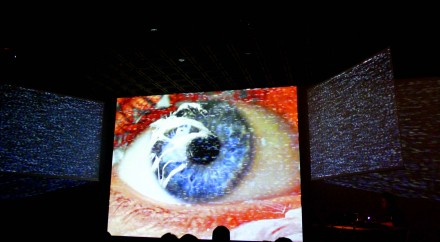 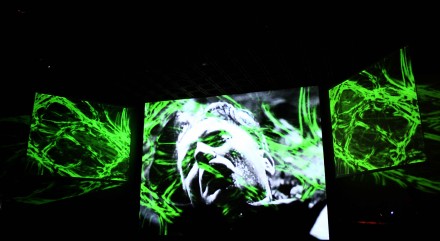 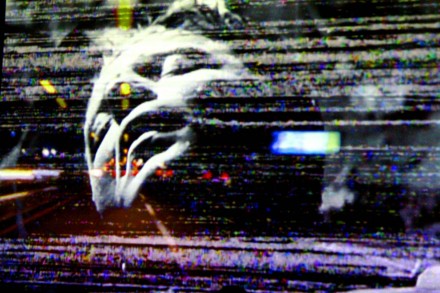 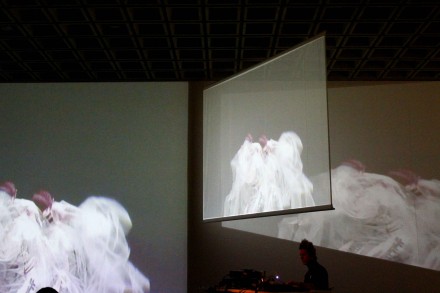 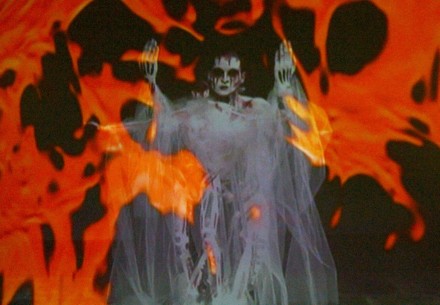 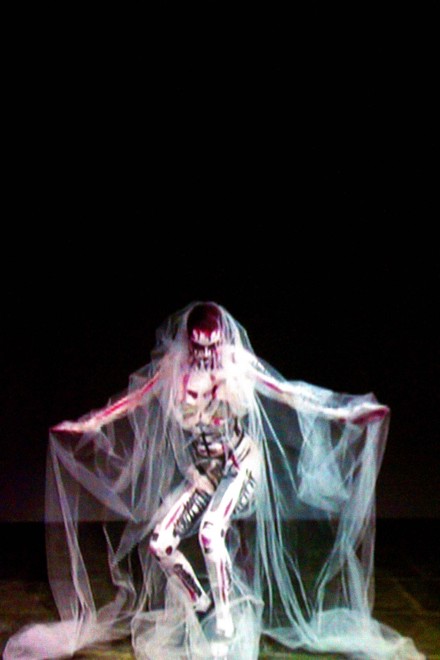 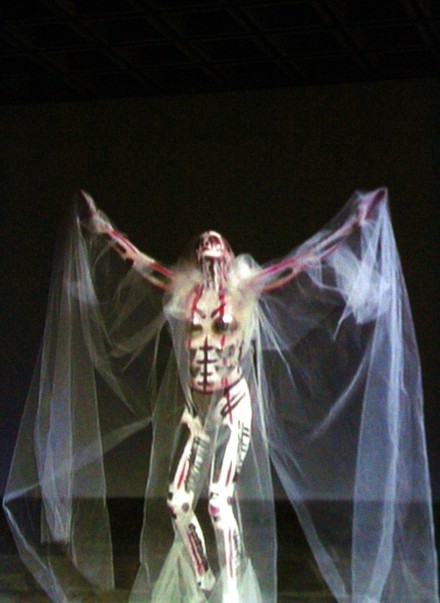 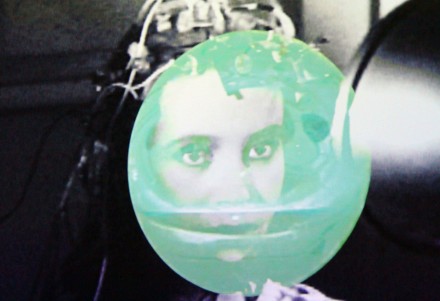 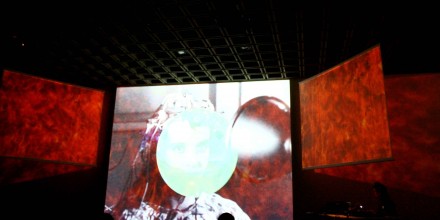 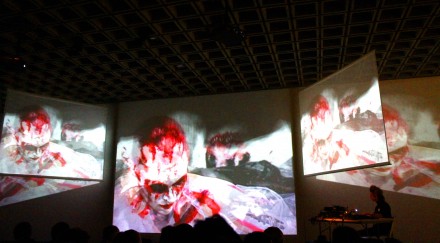 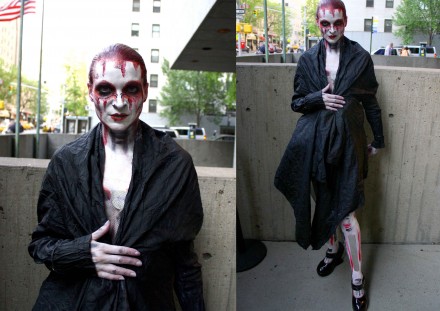 This entry was posted on Tuesday, April 24th, 2012 at 12:01 am and is filed under AO On Site. You can follow any responses to this entry through the RSS 2.0 feed. You can leave a response, or trackback from your own site.