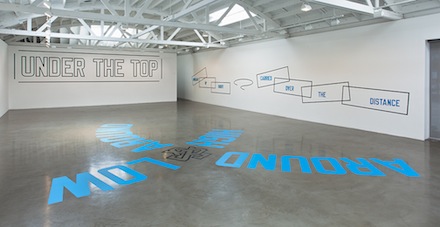 In his first exhibition in Los Angeles since his 2008 retrospective at the Museum of Contemporary Art, Conceptual art pioneer Lawrence Weiner took over the White Cube Gallery space at Regen Projects with his well-known works in language.

“1.THE ARTIST MAY CONSTRUCT THE WORK
2.THE WORK MAY BE FABRICATED
3.THE WORK NEED NOT BE BUILT”

From these three declarations, written in Weiner’s 1968 “Statement of Intent,” the artist not only moved from an object-based to a language-based practice, but helped to change the course of art production. A key member of the Conceptual art movement, which sought to examine the role of artistic intention in the production of meaning, Weiner eliminated the structural support of the frame in order to consider the larger contexts of the work. Since the late 1960s he has to this end triangulated language, architecture, and social-spatial orientation in an on-going exploration of how words perform meaning in space. 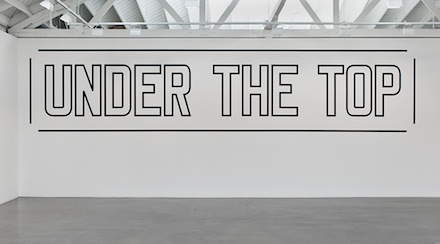 Language itself has continued to be Weiner’s primary medium throughout his 40-year career—language as an abstract, performative position and a pictographic image. In works such as “Placed Just Below Above the Horizon” and “Under the Top,” both from 2012, the phrases reference at once the architectural space which houses currently them (albeit coincidentally) and the perspectival construction of space as a concept (the horizon, the top).

Lawrence Weiner, BROUGHT UP SHORT CARRIED OVER THE DISTANCE (2012)

It is not just language we see on the wall though. It is language in particular typographic form, color, and arrangement. The pacing of the viewer’s reading is tempered by Weiner’s use of shapes, like the heavy black boxes in “Placed Just Below Above the Horizon” or “Brought Up Short Carried Over the Distance” (2012), which break up the words, leaving the proposition to be read as a single sentence (“placed just below above the horizon”) or, alternately, as two separate statements jammed together (“placed just below” // “above the horizon”). And if one reads in the manner as the latter, what is the relationship between these two descriptions of space? How can something be both below and above? 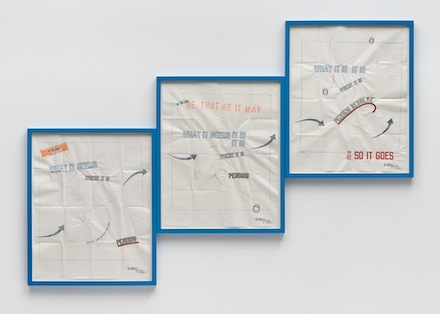 Frequently playing on these binaries— short and distant, high and low—Weiner’s works in language function as sculptural propositions in their conjuring of dynamic (and often absurd) spatial situations—situations which position a viewer’s body in relation to language as a form.  Wiener’s work is known internationally precisely for this play between language as form and form as language.

This entry was posted on Saturday, June 9th, 2012 at 12:19 am and is filed under Art News. You can follow any responses to this entry through the RSS 2.0 feed. You can leave a response, or trackback from your own site.