The Philosophy of Andy Warhol (From A to B and Back Again)
(Andy Warhol, 1977)
Read More and Buy↠
Home » London: Andy Warhol and Jean-Michel Basquiat ‘Olympic Rings’ at Gagosian Gallery 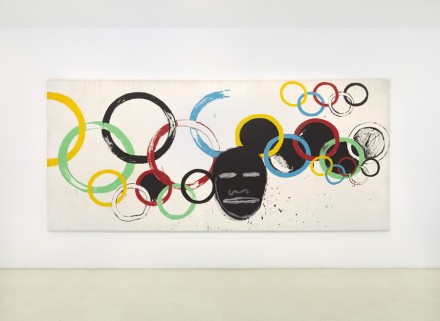 During the 1980’s, the personnages of both Andy Warhol and Jean-Michel Basquiat loomed large in the New York art world.  Warhol as one of its most visible older guard, and Basquiat as one of its prominent, up-and-coming stars.  But the two were also friends, and it was in this context that Basquiat and Warhol collaborated on a number of paintings that would end up being some of the last of their lives.  Blending Basquiat’s striking, often visceral approach with Warhol’s measured explorations of pop culture iconography, these pieces offered a marked commentary on both the style and subjects exhibited. 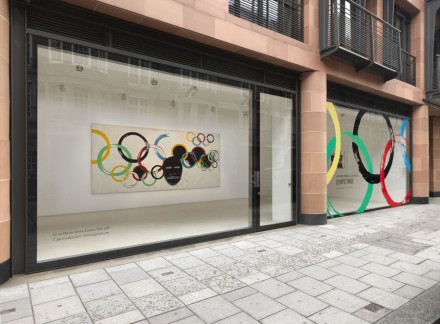 Gagosian Gallery, in conjunction with the upcoming Olympic Games celebration in London this summer, has chosen to exhibit one of these works, titled Olympic Rings.  Depicting Warhol’s hand-painted version of the Olympics’ instantly recognizable logo alongside Basquiat’s black-faced caricatures and smeared paint accents, the painting offers a pointed critique of cultural identity in a post-colonial world.

Immediately commanding the foreground of the painting, Basquiat’s black-faced subject offers an ironic, critical take on Warhol’s mostly reverent depiction, literally casting a black shadow on the logos he stands in front of.  While the Gagosian’s site offers a noncommital reference to a history of black American Olympians, Basquiat’s sarcasm and political bite shine through, much like the controversial Black Power salute of Olympics past. 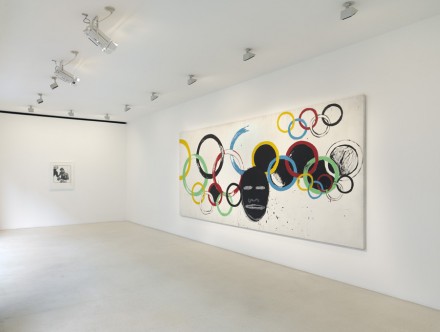 Olympic Rings will be on view until August 11th.

All images taken from The Gagosian site

This entry was posted on Friday, July 13th, 2012 at 11:12 pm and is filed under Art News. You can follow any responses to this entry through the RSS 2.0 feed. You can leave a response, or trackback from your own site.