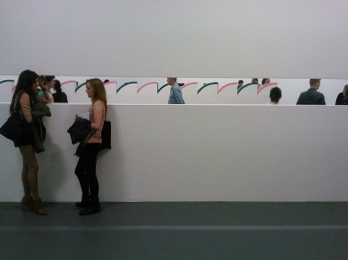 Elad Lassry‘s new show, Untitled (Presence), is on view at The Kitchen through October 20th. The solo exhibition includes 20 new photographs, a short run of performances featuring members of The American Ballet Theatre and The New York City Ballet, as well as a short 16 mm abstract film projected onto the wall. The exhibition was preceded by Lassry’s billboard, Women (065, 055), which appeared along the Highline Park as part of its ongoing series of work by various artists. The 25 x 75 foot-work at 18th street and 10th avenue was on view for a month until the show’s opening at the Kitchen on September 7th. 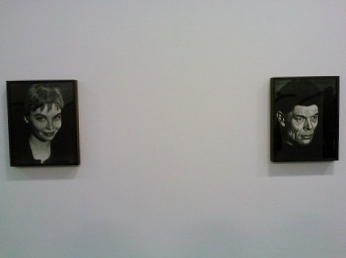 Throughout The Kitchen’s second floor gallery is a mix of portraits and still lifes, small and rectangular, and hung just below eye-level.  Most of the portraits are black and white prints. They resemble glossy Hollywood headshots, but feature subjects of unconventional beauty, whose facial expressions remain emotionally ambiguous. Several of the dancers from Lassry’s accompanying performance are among those photographed, including the two women who appeared in the Highline billboard, hair slicked back, individually framed in oval cutouts against a saturated emerald green background. 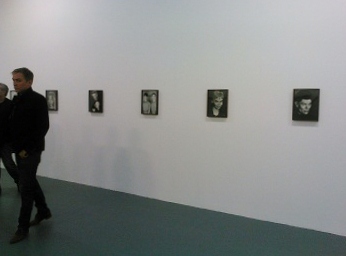 The still life photographs are a colorful and eclectic mix that hint at domestic kitsch, with a 1960s-era aesthetic. The work is at once curious, and feels intentionally dated. One example, Dishes (Strawberry), shows a matching cup and plate, propped up toward the camera with viny garden strawberries covering the white ceramic objects. 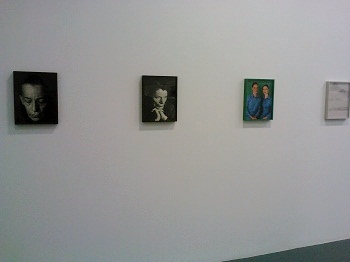 Image: Elad Lassry, Untitled (Presence), 2012.The space has been accented with molded entryways and shaped partitions that frame the work, and even the visitors, as they traverse through, bringing them into the aesthetic experience in some way. Halves of bodies disappear as they meander behind barriers topped with pink and green waves. Imposed shape and frame are two repeating elements of Lassry’s accented minimalism, as is his choice of unexpected color groups– here mixing bright gem tones, earth tones, and pastels. 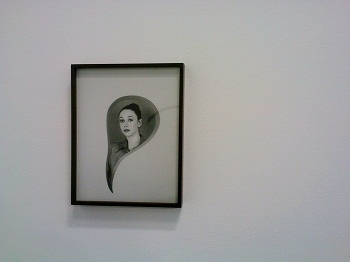 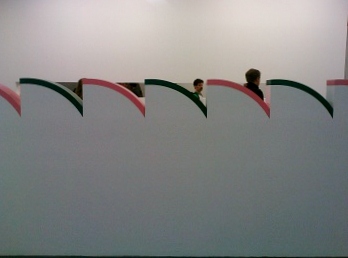 Lassry’s wordless performance features male and female ballet dancers costumed in monochromatic pantsuits in periwinkle and gold. They repeat simple hand gestures, which compliments the elaborate and rhythmic footwork, as toe shoes tap rapidly against the stage floor. Moving between moments of static and non-static tableau, the performers are outlined — or enclosed — by an ever-elaborate network of movable set pieces, a continuation of Lassry’s use of frames and silhouettes. 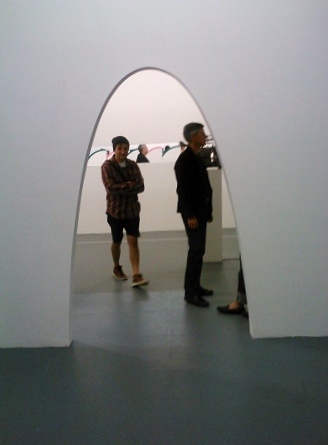 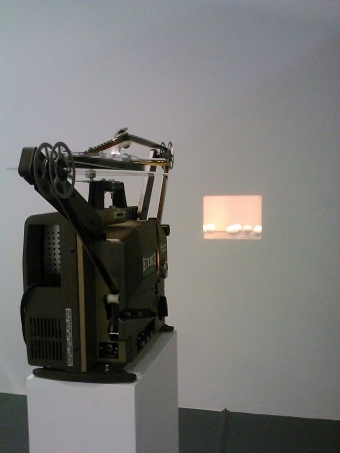 Lassry has created a show embedded with an awareness that echoes the decisive moment where object, shape and color transcend into image, as a lasting impression is made upon the viewer in that instance.

All photos taken on site for Art Observed by Ryann Donnelly

This entry was posted on Saturday, September 29th, 2012 at 12:01 am and is filed under Art News, Go See. You can follow any responses to this entry through the RSS 2.0 feed. You can leave a response, or trackback from your own site.