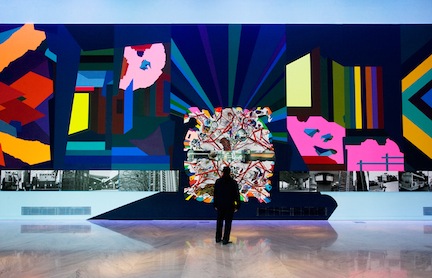 Before installing the site-specific Walking South at Faena Arts Center in Buenos Aires, Franz Ackermann walked, trained, biked and bussed across the city for two months. Once, he took the train to the outskirts of the city and walked the same distance back, all part of his psychogeographical plan to map the city.

The result is a 260-square-meter (equal to ten highway billboards) multi-layered, 25-panel installation bursting with Ackermann’s emotional response to the landscape, dirt, people and air of Buenos Aires. Black and white photographs of buildings, cars, and street corners are a somber base for bright, unexpected shapes that extend from a busy center node, which is a tangle of red, blue, and grey tentacles growing from jellyfish-like bodies. These irregular bodies float among and encircle photos of reality, both connecting and confusing the viewer. 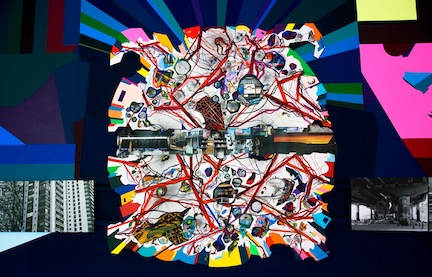 Ackermann was born in 1963 in Neumarkt St. Veit, Germany. He studied art at Akademie der Bildenden Kunste in Munich and at Hochschule fur Bildende Kunst in Hamburg. He was awarded the DAAD scholarship in 1991, which he used to work and study in Hong Kong, cementing the connection between his work and travel. 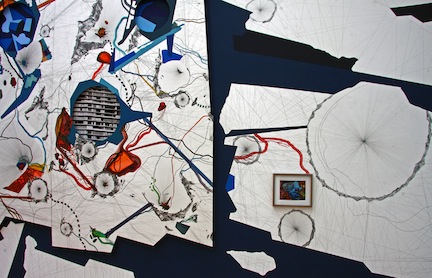 From a distance, the chaos is contained, even calm in its largesse. Asymmetrical faces and smiles appear in the shapes, suggesting Picasso’s intense, disjointed figures or Francis Bacon’s garbled portraits. The colors, paths, and urban textures recall Julie Mehretu’s Stadia paintings. Some viewers recognize anxiety in Ackermann’s work and describe a foreboding representation of global terrorism and degradation. Certainly a confrontation exists in this installation, but the contained center node, the distinct color blocks, and the confidence with which the realistic and the imagined spaces are represented is decidedly comforting, even uplifting. 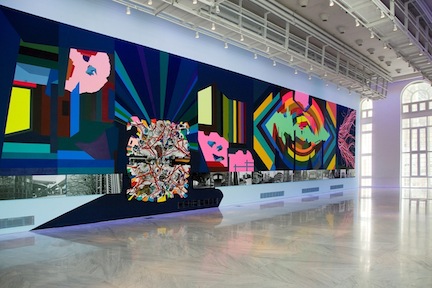 The theory behind psychogeography was developed during the European Situationist International movement in the late ’50s and ’60s. The situationists rejected the environments created by advanced capitalism and championed the experiences and art forms that offered an alternative experience. The act of dérive, or drift, was a way to disconnect from the current reality and live a new, truer one. While walking through Buenos Aires, Ackermann let his usual movements and actions fall way. He allowed himself to be guided by the smells, visions, and movement of this environment, stopping and continuing as things happened or did not happen, allowing for pure emotional response.

Ackermann’s initial plans are made during his walks, with pen, pencil, and watercolor. Later his ideas are translated to wooden panels painted with acrylic. This installation features photographs he took during his walks, which Ackermann hopes will “remind you where you are.” How could we forget? 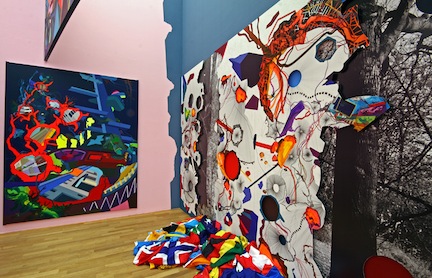 These techniques and the travel required are an essential element in Ackermann’s work, and this installation is thus far his largest and most ambitious mental map. Ackermann first appeared in South America in 1998, in a group show at the Museum of Modern Art in Rio de Janeiro. Since then, he has had solo exhibitions at Kunstmuseum Bonn, the Irish Museum of Modern Art, Museo Nacional Centro de Arte Reina Sofía, the Museum of Contemporary Art in Chicago, and others.

Walking South is on view until November 30th.

This entry was posted on Wednesday, November 28th, 2012 at 3:18 pm and is filed under Art News, Go See. You can follow any responses to this entry through the RSS 2.0 feed. You can leave a response, or trackback from your own site.