February 24th, 2021
REFERENCE LIBRARY
Home » Rome – “Neon: The Luminous Matter Of Art” At The Museum of Contemporary Art of Rome Through November 11th, 2012

Rome – “Neon: The Luminous Matter Of Art” At The Museum of Contemporary Art of Rome Through November 11th, 2012 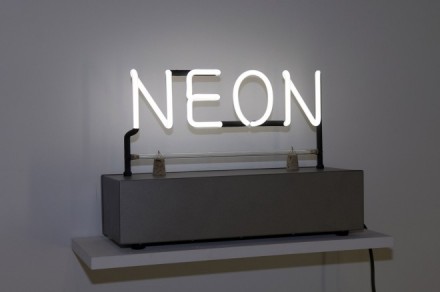 MACRO, the Museum of Contemporary Art of Rome, has filled its expansive Enel Hall with close to 70 illuminated works for its show Neon: the Luminous Matter of Art.  An exhibition dedicated solely to the use of neon, the show brings together 50 artists who have worked with the medium in contemporary practice. The sculptures, installations and textual works lay the art-historical framework for conceptual practice based on semiotics while also (more literally) paying homage to the medium’s origins as material for signage. Mauricio Nannucci, Not All At Once, 1993

The neon installations are presented in six thematic sections, displayed by content and highlighting the museum’s modern structural  frame.

“Signs” starts with the artistic interpretations of the origins of the medium, while “Babel” takes it one step further, showcasing complexly constructed works. “I/We” examines the private and intimate as well as collective spaces, while “Missing Poem” addresses linguistic and lyrical expression. “Geometry” focuses on shapes and composition, and “Starting Point” pays homage to the medium’s first innovators, with a selection of seminal works on display. The exhibition was curated by David Rosenberg and Bartolomeo Pietromarchi and co-organized with La Maison Rouge in Paris, where it was originally displayed through May 20th of this year. Neon fittingly celebrates the collaboration between MACRO and the Italian utility company ENEL as part of a commemoration of the company’s 50th anniversary.

This entry was posted on Thursday, November 1st, 2012 at 8:24 pm and is filed under Art News, Go See. You can follow any responses to this entry through the RSS 2.0 feed. You can leave a response, or trackback from your own site.