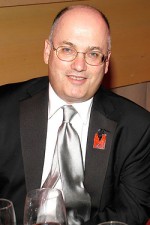 The man who spent nearly half a million dollars in the first hour of Art Basel Miami 2010 is missing from the action this year. Steven Cohen, founder of SAC Capital Advisors, may be taking a break due to recent legal trouble. Though Cohen has not been charged, his employee Mathew Martoma was accused of insider trading while working at SAC, and there are rumors the government will parlay their Martoma accusation into a charge against Cohen. Galleries to whom Cohen is especially loyal will miss him this year, and David Zwirner of the eponymous gallery told the New York Times, “We would absolutely hate to have him not active in the market, I can wholeheartedly say that. I think the art world is rooting for him. I’m rooting for him. I wish he were here right now.”

via the NY Times

This entry was posted on Friday, December 7th, 2012 at 4:45 pm and is filed under Art News, Collectors. You can follow any responses to this entry through the RSS 2.0 feed. You can leave a response, or trackback from your own site.