Cézanne Siezed in Russian Revolution to Stay at the Metropolitan 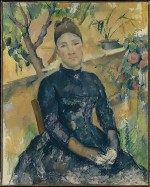 A deceased Metropolitan Museum trustee, Stephen Clark, had donated Cézanne’s “Madame Cézanne in the Conservatory”, which he purchased in 1933. Title was contested by Pierre Konowaloff, who was the sole heir of a collector whose assets were confiscated by the state during the Russian Revolution. Konowaloff argued that there was no legal process in the seizure and that the painting was unduly exported as a result. The Second U.S. Circuit Court of Appeals in New York ruled that legal doctrine precludes U.S. courts from inquiring into the validity of decisions by recognized foreign sovereign governments within their own territory.
Read the article via Reuters

This entry was posted on Tuesday, December 18th, 2012 at 9:52 pm and is filed under Art News. You can follow any responses to this entry through the RSS 2.0 feed. You can leave a response, or trackback from your own site.