AO Interview – Peter Burr before his “Special Effect” performance at The Museum of the Moving Image tomorrow, Friday, January 18th at 7PM 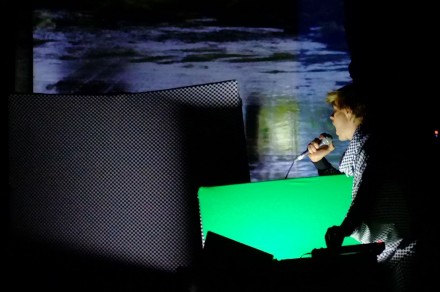 Over the course of his career, video artist Peter Burr has worn many hats; founding avant-garde animation label Cartune Xprez, playing and animating for the performance art duo Hooliganship, and working on a variety of video projects and installations around the globe.  His newest work, titled Special Effect, will hold its U.S. premiere at the Museum of Moving Image on Friday, January 18th.  Taking the eerie, haunting film Stalker by Russian filmmaker Andrei Tarkovsky as its jumping off point, the show is a multifaceted media presentation, incorporating music, live performance, projection, body mapping, and a selection of videos from contributors across the new media landscape.

Art Observed had the opportunity to speak with Burr about the show, his take on Stalker, and his approach to creating this ambitious work. 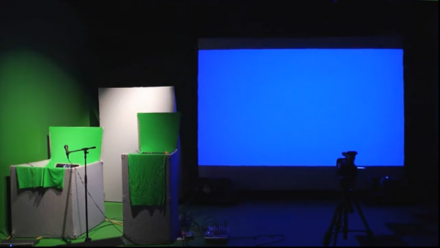 Peter Burr, Special Effect (2012), via Museum of the Moving Image

Art Observed: First off, I was hoping you could tell me where your inspiration to work with Stalker came from?  Is it an aesthetic influence? Thematic? Emotional?
Peter Burr: The aesthetic and mood of the original film are big reference points for the show. In fact, the genesis for Special Effect was in a suite of computer images I made while watching the film over and over again last winter. The specifics of the movie weren’t in those images, but some of the mood and framing was there. They were striking pictures to me, so I decided to explore them in four dimensions. Around this time, I was talking with a few other video artists and animators and noticed there was a thread here that these artists were also inspired by. So that, in turn, gave birth to the whole project. 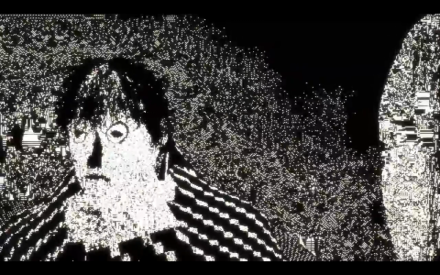 Peter Burr, Still from Special Effect (2012), via Museum of Modern Art
AO: Can you walk us through the practice of preparing the project?
PB: This show has been a real marathon. I conceived of it early last summer and jumped right into the wild administrative tasks of commissioning artists, raising funds, and sorting through curatorial logistics. By the end of the summer I was deep in animation mode. I chose two musical groups to work closely with me to develop the soundtrack for the show- Lucky Dragons and Seabat. I also chose a writing collaborator, Maya Lubinsky, to help develop the show’s script. Working in a big messy sync, I would animate scenes (with the help of Billy Grant), redraft the script, rework the audio, reanimate scenes, and so on until the piece took its shape. Towards the end of this process I made the set and costumes with the help of Elliott Montgomery and Diana Joy. During this time I had been playing around with different live camera tricks with Mike Heavers, and once all of these other pieces were in place I employed our camera tricks to string the show together. 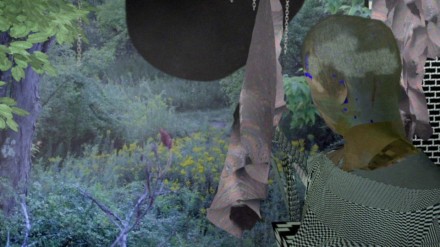 Peter Burr, Still from Special Effect (2012), Courtesy of Peter Burr
AO: Tarkovsky’s film has these elements of disembodiment; The Zone is this space where the link between physical reality, perception and exterior forces all co-mingle.  Did this inform the creation of Special Effect?
PB:  I like how The Zone is a place that makes our world unfamiliar to us— it presents a fairly normal ruined landscape, something that I often ignore here in New York City,  in an unrecognizable way. I’m also impressed by how Tarkovsky uses tools of fiction to understand who we really are, what we really want.  I think it’s interesting how unclear it is whether or not anybody really knows what he/she wants. 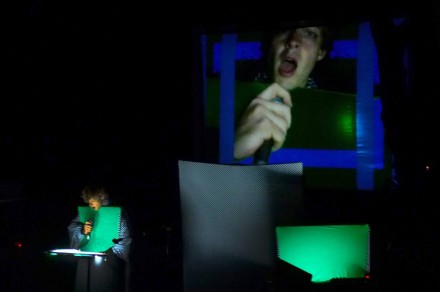 Peter Burr, Special Effect (2012), Courtesy of Peter Burr
AO: How do you conceptualize your performance working live with projection and green screens?
PB: The green screen creates an invisible thread between the performer and the projection. It’s a great tool to distort the way we perceive narrative time and space. 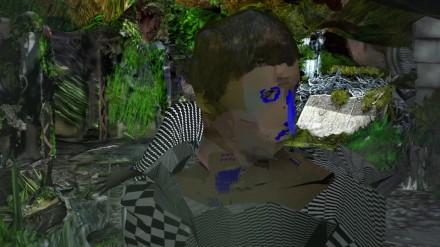 Peter Burr, Still from Special Effect (2012), Courtesy of Peter Burr
AO: Performance seems much more intricately linked to the video presented than in past work.
PB: When I first started making live video shows I was in a band and we would make cartoon music performances. We were having fun with the conventions of rock&roll. As you point out, this piece is quite different. Its more of an experiment in live cinema than anything I’ve done before. In many ways it’s a movie in the traditional sense. We sit down with popcorn in-hand and watch a movie about 3 guys going on a trip. The performance complicates that – introducing commercial breaks, musical segues, and a whole new point of reference off the giant movie screen. 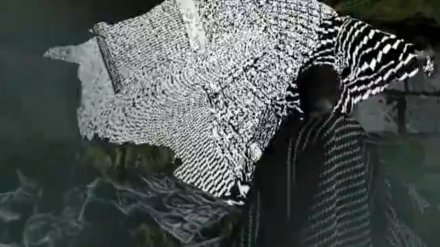 This entry was posted on Thursday, January 17th, 2013 at 9:19 pm and is filed under Art News, Go See, Interview. You can follow any responses to this entry through the RSS 2.0 feed. You can leave a response, or trackback from your own site.