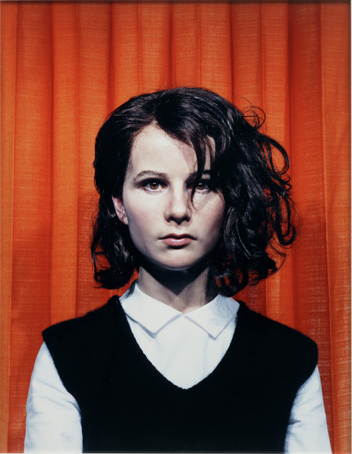 On view through January 6th at Kunstsammlung Nordrhein-Westfalen, Düsseldorf is a survey of Gillian Wearing’s film and photographs. The 1997 Turner Prize recipient’s work explores the relationship between one’s public and private personas, and the difference between reality and fiction. 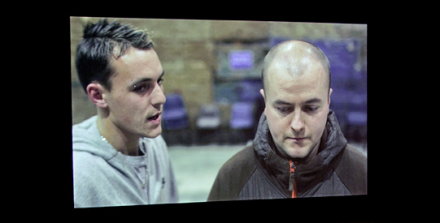 As Wearing’s films often provoke the viewer to consider what is real and what is performed, the show opens with the popular 1994 video Dancing in Peckham,  for which the artist dances in the middle of a London shopping mall, to music that only she can hear. She appears liberated and “unaware” of her audience of pedestrians, but it is clear to the viewer that the act is staged. In a more recent video, Bully (2010),a young adult re-creates the scene of a past experience, directing untrained actors to play the roles of others involved. Here too, the distinction between what is performed and what is real is hazy. 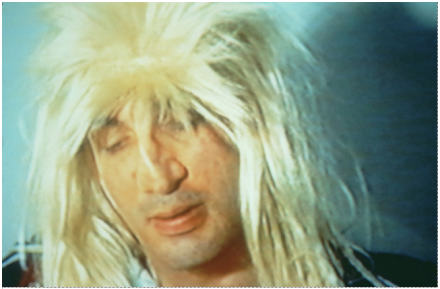 Gillian Wearing, Confess All On Video. Don’t Worry, You Will Be In Disguise. Intrigued? Call Gillan… (1994).

The dichotomy of disguising and revealing identity informs a number of photo and video works. Wearing skews identities by disconnecting sound and spoken word to reveal inner truths in the film 10-16 (1997). Children aged 10-16 years old describe their feelings, while on screen their voices are lip synced by adults, illustrating that despite the appearance of age, the innocence and fragility of a child remains within. 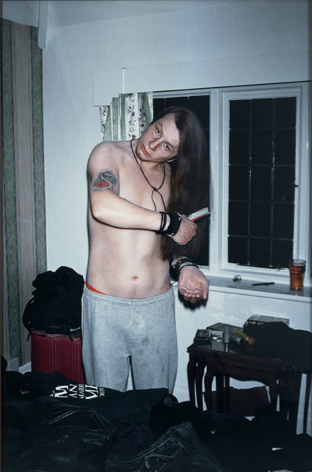 Gillian Wearing, Self Portrait as my Brother Richard Wearing (2003).

Confess All On Video. Don’t Worry, You Will Be In Disguise. Intrigued? Call Gillian… (1994), and two subsequent video works of the same nature are appropriately on view in three small booths that evoke a confessional or a peep show. For Confess All…, Wearing placed an advert in the classifieds to attract strangers to disclose secrets on film. Using masks to conceal their identity, the person underneath is free to reveal intensely personal details of violent, traumatic, and disturbing experiences that they would not share under the guise of their own public personas. 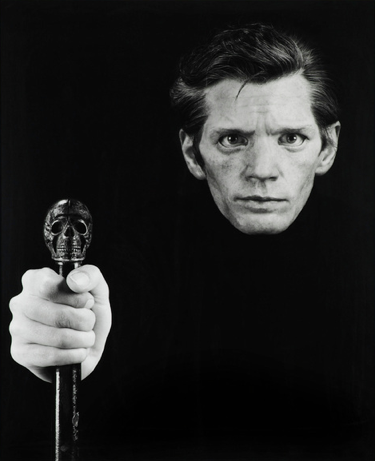 Wearing also situates herself behind masks that she has meticulously created to resemble family members and artists who have influenced her such as Diane Arbus, Robert Mapplethorpe, and Andy Warhol (or herself at age 17, above). She takes portraits of herself inhabited as other, making a near replica of source photographs. These photos are inherently performative — her eyes gaze out, the seam where the mask meeting the eye deliberately exposed, to remind the viewer that identity is contingent on the family and influences that exist within us. 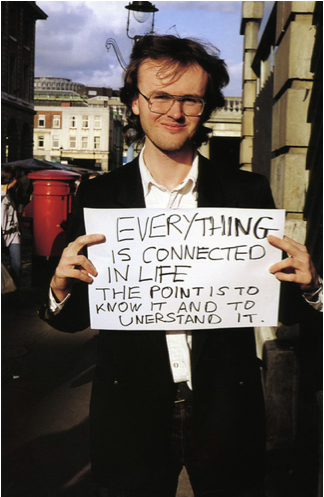 Signs That Say What You Want Them to Say and not Signs That Say What Someone Else Wants You to Say was a series created from 1992-3 of photographs of strangers on the street holding up signs with their inner thoughts written on them, once again confounding expectations of outside identity and inner voice. 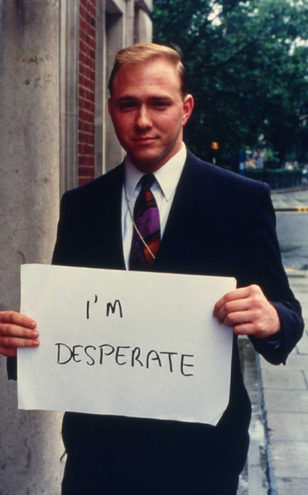 Wearing’s ouvre echoes the truth that if someone is given a mask or is acting out a role, underlying truths will be uncovered, and we are left to cast the questions of genuine and artifice, public and private persona upon ourselves.

This entry was posted on Tuesday, January 1st, 2013 at 9:51 pm and is filed under Art News, Go See. You can follow any responses to this entry through the RSS 2.0 feed. You can leave a response, or trackback from your own site.