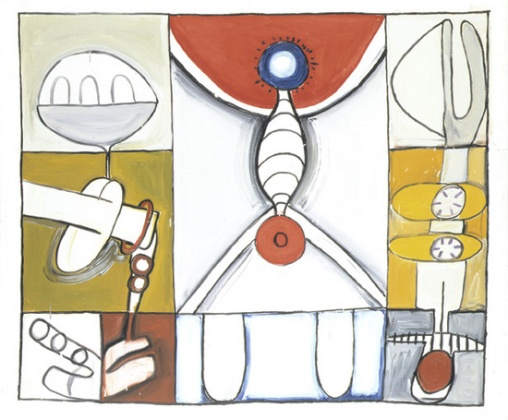 Eva Hesse’s 1965, on view at Hauser and Wirth in London, is a visual representation of a productive period in the late artist’s life.  Named after the formative year in which the pieces on view were created, it reflects the artist’s physical and mental states during this period, a time when she undertook a residency at Kettwig an der Ruhr, Germany.  Living in an abandoned textile factory, Hesse built a new style of working from the sewing machines, fabrics and other cast-off material in her space, simultaneously building a new artistic and personal awareness for herself in the process. 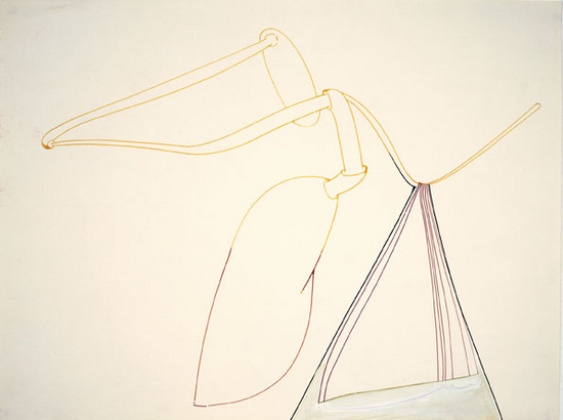 Born in Hamburg in 1936, Hesse passed away in 1970, a victim of brain cancer. As a consequence of her early death she was only able to truly work on her practice for a decade or so, making her short body of work a captivating portrait of an artist as she builds her own personal language. 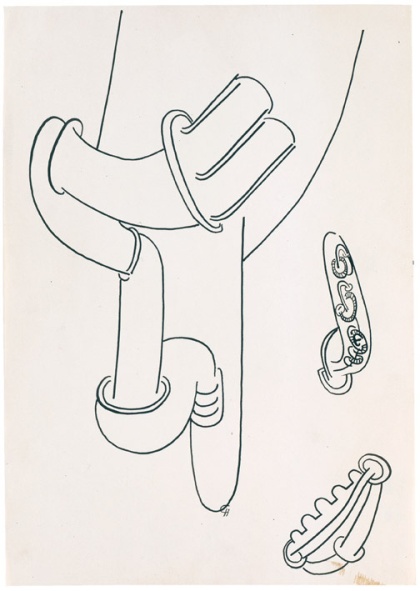 The collection on view consists of a vast array of drawings, paintings and reliefs. The three mediums seem to embody the thought and planning of a production process, bearing the imprint of Hesse’s industrial living space.  The abundant machine parts and tools became fixtures in her life, and ones she willingly put to use in her work.  Hesse even redirected her approach to color as a result,  using it as a communicative platform rather than an aspect of her visual aesthetic. 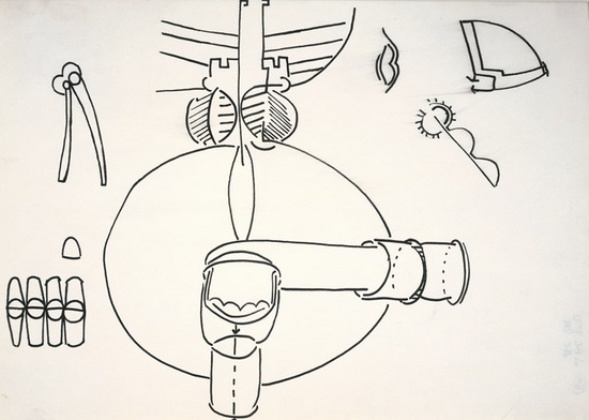 Hesse’s drawings are clear and mechanical, bearing numerous references to mechanical components, often connected through figurative, additive formations and appendages. The intricate constructions, which Hesse reduces to outline, represent the first steps of the construction process. Curved appendages are secured into sketchy structures with an array of hollow cogs, wheels and various connectors. At first glance, the works could be mistaken for the blue prints of an architect, or the raw sketches of a fashion designer.  Hesse herself often described these works as “clean and clear – but crazy like machines.” 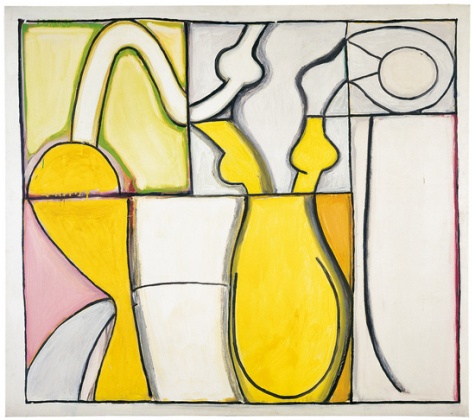 All of her “line drawings” are titled, ironically, as No Title, employing a subtle, allegorical irony towards naming her two dimensional mechanisms.  Since the works on view appear as blueprints, their depiction seems intended as a transition towards a final, tangible structure instead of a completed creative work.  This contrast between notions of completion again underlines the peculiar effects that Hesse’s surroundings had on her artistic practice. 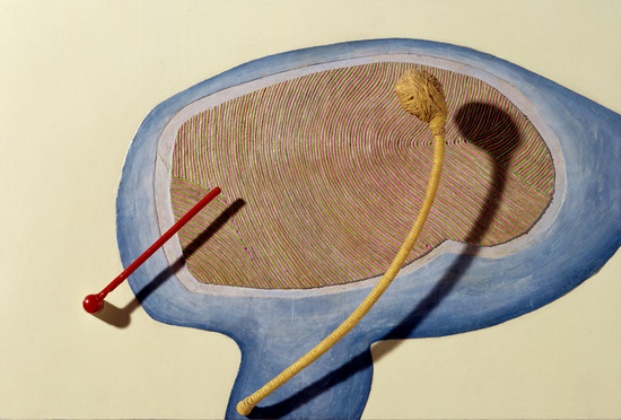 Hesse continued her rendition of the production process through the medium of paint, filling in the hollow entities that exist in her drawings with bold, block colors.  They also bear the paradoxical name No Title, and are divided into a grid-like formation, segmenting her designs with line-boundaries. The differing formations are reminiscent of a storyboard or visual plan, seem to adapt the best aspects of her outlines into the impression of a creative progression in her work.

The final stage of the process is the production itself. To represent the manufacturing process, Hesse moves into the third dimension with her works. Pieces such as Oomamaboomba and H + H are built up constructions that reference the artist’s body of work. Oomamaboomba consists of several naturally coloured wooden panels that are geometrically cut and intertwined with cord. Brown and brownish-yellow shades are juxtaposed alongside each other in the wooden formation, and three dark brown circular panels have been incorporated in the centre of the construct; ‘appendages’ that sit neatly at the top of the work’s body, perhaps referencing the circularity of many mechanisms such as cogs and bolts. The cord, which dangles from the formation’s body, is coloured with a solid, bright fuchsia that gradually fades out as it descends down the work. The coloration of the rope, along with a central, zebra stripe panel gives the work a hint of ethnicity, suggesting the new cultural experiences Hesse is facing in an environment that is not the norm. 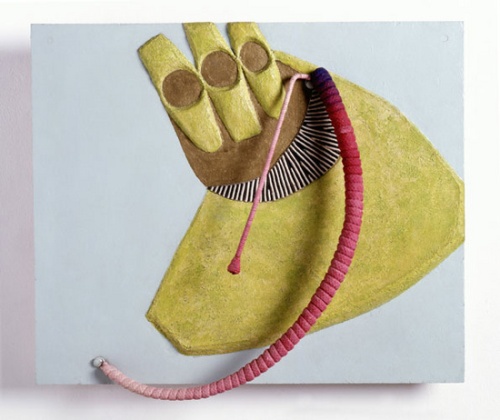 Her placement at a textile factory truly defined Hesse’s work in this series, and helped her progress in her discipline to a state of theoretical refinement. Exploring this formative year, Hauser and Wirth has compiled a remarkable look at a productive era of Hesse’s short but distinguished career.

The show is on view until March 9th.

This entry was posted on Monday, February 11th, 2013 at 12:01 am and is filed under Art News. You can follow any responses to this entry through the RSS 2.0 feed. You can leave a response, or trackback from your own site.