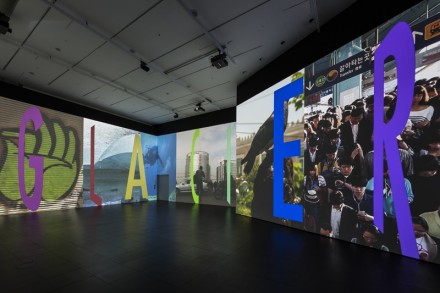 The American-born Charles Atlas has been a pioneer in the fields of dance, theater, and performance on video. In his career he has worked with world renowned artists such as Marina Abramovic, Leigh Bowery, Michael Clark, Merce Cunnigham, Diamanda Galas, Antony and the Johnsons, and Yvonne Rainer.  In a current collaboration with South London Gallery and Bloomberg SPACE, Atlas presents Glacier, a 360-degree multi channel video installation consisting of original, found and manipulated images. 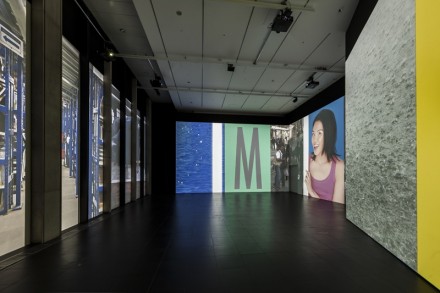 Atlas is quite well known for making films for dance, particularly for choreographer Merce Cunnigham, so it is no surprise that this current work has a strong relation to movement and rhythm. The images shift clock-wise throughout the room, accompanied by an atmospheric soundtrack. Vertical bars of colored light, numbers and letters are also interspersed throughout the looped footage, some of which was culled directly from the Bloomberg SPACE digital archives. 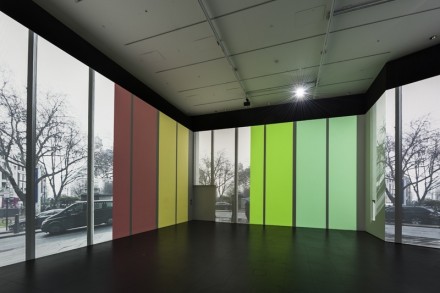 The images provide possible layers of interpretation of the work’s title; movements of crowds of people, conveyor belts, and waterfalls alternate with fluid images of molten rock and paint, suggestive of the ideas of motion and its potential forces.  A glacier is an ever-moving, albeit incredibly slow, mass of ice.  Ironically, it’s impossible to perceive the actual movement or force of a glacier despite its ability to eventually work its way down great distances and through solid masses of rock. Whether a glacier is a metaphor or a commentary about our current relationship to our surroundings and/or environment is left to the viewer. 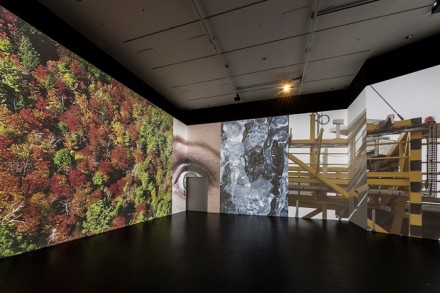 At the final point before the video re-loops, the room is inverted, projecting the surrounding environment of Finsbury Square on all four walls of the room. Recorded earlier from inside the gallery, this inside/outside perspective challenges the distance that was previously available between viewer and video, and highlights Atlas’s ability to create an all-encompassing environment. 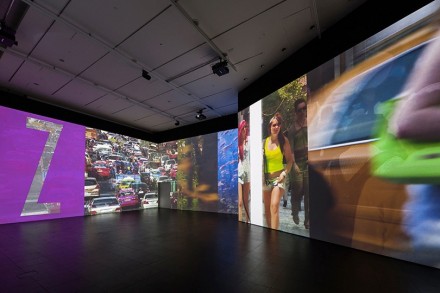 Glacier is a striking new installation by Atlas, and another strong entry in an already impressive body of work.  Charles Atlas will also be collaborating this March with the Tate Modern in their BMW Tate Live series held at The Tanks.

This entry was posted on Saturday, March 30th, 2013 at 7:04 pm and is filed under Art News. You can follow any responses to this entry through the RSS 2.0 feed. You can leave a response, or trackback from your own site.