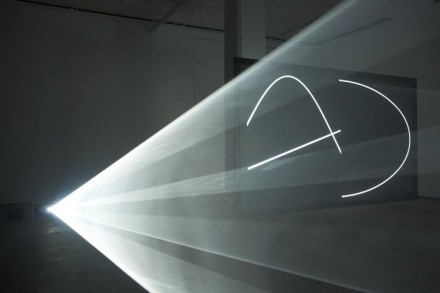 Anthony McCall’s body of work is punctuated by decades of silence.  Withdrawing from the art world in the late 1970’s after a number of promising exhibitions and installations around the globe, the artist completely ceased his artistic production until 2003, when he began experimenting with digital film projectors.  10 years later, the artist is presenting Face to Face at Sean Kelly Gallery, showing two works from the opposite ends of the artist’s career. 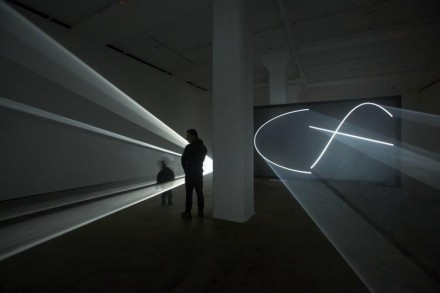 Throughout his career, McCall has frequently revisited the definition of space through visual fields.  Using minimal elements, including mirrors and thin strands of light, his works offer shifting, nuanced perceptions of their surroundings, bending or projecting light to create a multiplicity of visual vantage points.  Light itself becomes an illustrative force, particularly in his “solid-light” works, which use single beams or shapes of light to work inside and outside the physical moorings of a space simultaneously to create new forms. 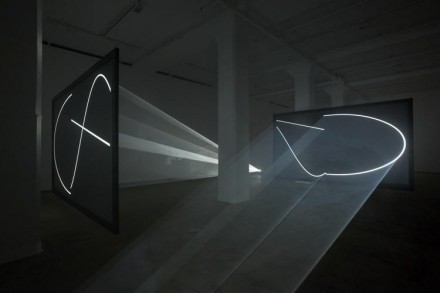 Face to Face (2013) does just that.  Installed in a dark, smoky ground-floor room at the gallery, McCall presents two separate projections, beamed against parallel frames.  Constantly shifting over the course of their programmed routine, the pure, white lines of the work intersect and overlap, creating a variety of figures and forms, interacting with the viewer’s passing while remaining firmly locked in dialogue with each other.  The room is transformed into a system, constantly changing in its visual format through the movement of light, viewer, and smoke.  The process, the raw experience of interaction works to create a space of constant flux, bounded by the surrounding walls, but still open to an infinite variation of positions and viewpoints within the room. 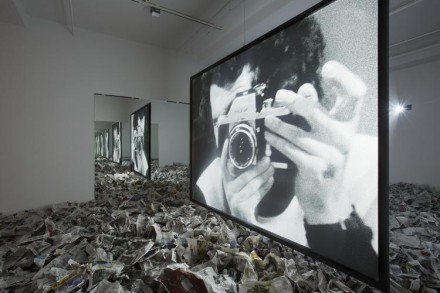 One floor below, McCall presents a look at another work, made several years before his premature retirement from the art world.  Circulation Figures, made originally for a 1972 performance in which the artist filled room with shredded newspaper and mirrors and invited filmmakers to photograph and film each other, is presented here as a particular brand of homage.  The completed loop of footage, compiled by McCall, plays endlessly on a projection screen in the center of the room, bisecting a set of parallel mirrors that project the space within their frames endlessly.  Once again exploring the variations of position and perspective contained within a space, Circulation Figures becomes a fitting homage to the original event, when McCall created his own loop of practice, constantly capturing the act of creation in a space designed to infinitely repeat itself. 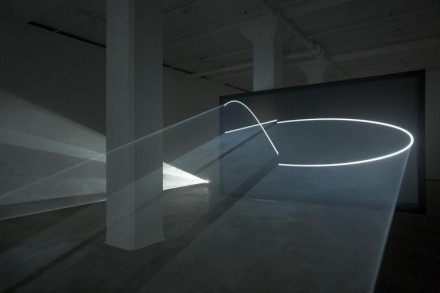 This sense of timelessness, encapsulated in a singular space, pervades McCall’s work, providing a set of parameters along which the actors and environment are allowed to constantly evaluate and present themselves in a multitude of configurations.  While separated by a 30-year gap, the two works present a striking continuum of McCall’s practice, while showcasing his ever-evolving expression of space and time.

This entry was posted on Friday, March 22nd, 2013 at 12:00 am and is filed under Art News, Galleries, Go See. You can follow any responses to this entry through the RSS 2.0 feed. You can leave a response, or trackback from your own site.