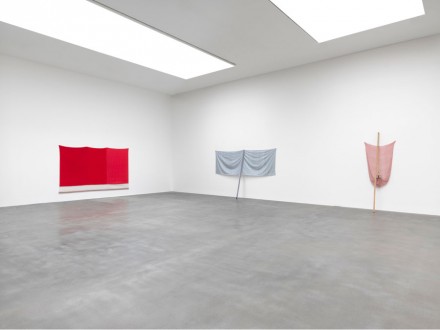 Currently on view at Gagosian Gallery in London is a display of Robert Rauschenberg’s vibrant and unique Jammers installations from 1975, a series of elegantly draped fabrics inspired by nautical aesthetics and Rauschenberg’s then recent move from New York to Captiva Island off the coast of Florida. 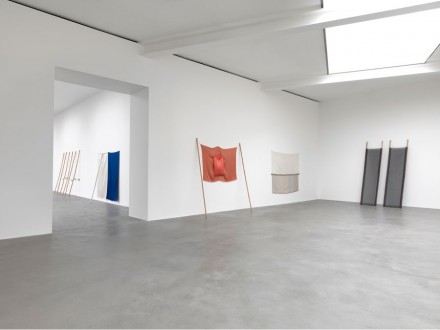 Rauschenberg (1925-2008) was born in Texas, and studied at the Kansas City Art Institute after serving in the U.S. Navy during World War II. In 1948, he traveled to Paris to study at the Academie Julian, where he met and later married artist Susan Weil. Together with Weil, he studied under Joseph Albers in North Carolina at Black Mountain College, where he would later befriend Merce Cunningham, John Cage, and David Tudor. 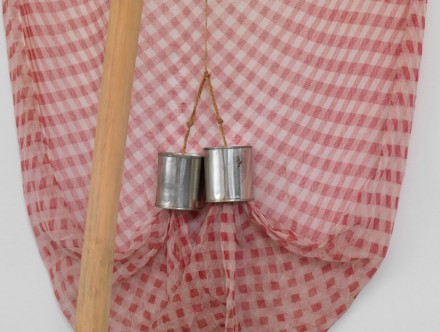 Rauschenberg is perhaps best known for his “Combines,” integrating trash found on the street of New York City into his work in order to change the context and create new meaning. Rauschenberg also worked in photography, performance, dance, printmaking, and papermaking, and his work was a partial inspiration for the Pop Art movement of the 1960s.  Interested in the idea of fusing different, traditionally divided modes of artmaking and materials, Rauschenberg was an inventor of new processes and unconventional genres. His concept of the “flatbed picture plane,” for example, represented an evolution in art history which changed the relationship between artist, image, and viewer. 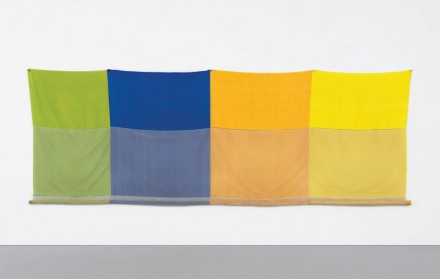 The Jammers series currently on view at Gagosian Gallery was created between 1975 and 1976, and the title refers to the Windjammer sailing vessel that he used after moving to Captiva Island, Florida in the early 1970s. The Jammers expose a distinct shift in Rauschenberg’s style, from gritty, urban and scattered found objects to solid, bright-colored and geometric abstractions. 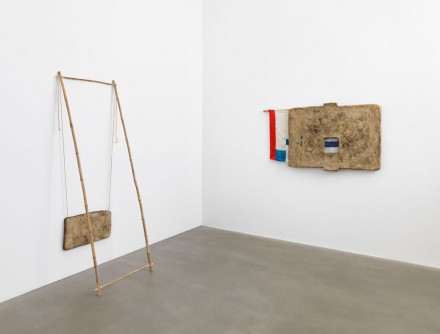 A breezy, Floridian ease infuses the works on view, offerring an intriguing look at an artist in new environs, and welcoming fresh perspectives on his practice. Using simple and light cotton, silk and muslin fabrics,  in contrast to his previously dense, layered collaged works, Rauschenberg creates new links between creative location, inspiration, viewer and context.  The artist himself details the work’s new voice, working against his habitual approaches.  As he says, the creation of the Jammers involved “a great amount of restraint upon myself…Nearly everything that I could think to do previously would ahve violated what these pieces wanted to be.” 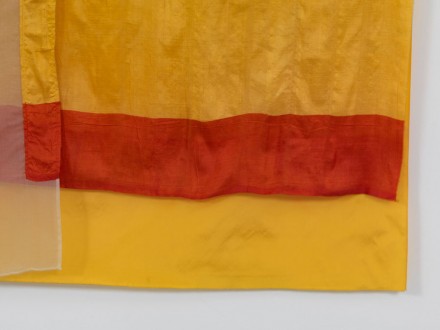 Exotic and bold, the Jammers were inspired partially by Rauschenberg’s investigation of textiles in India during his trip there in 1975,  where he also explored the art of papermaking. The resulting Jammers are stitched fabrics attached to poles and hung on the wall. Also included are empty poles propped up against the wall. Rauschenberg has highlighted the transparency and lightness of the fabric, forming to the structures on which they are draped.

Jammers will continue its run at Gagosian Gallery through March 28th, 2013.

This entry was posted on Saturday, March 23rd, 2013 at 10:33 pm and is filed under Art News. You can follow any responses to this entry through the RSS 2.0 feed. You can leave a response, or trackback from your own site.