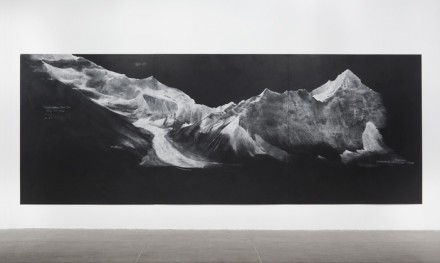 Marian Goodman Gallery is currently hosting the first showing of Tacita Dean’s, Fatigues, a recent series of drawings initially exhibited in Kassel at this past summer’s documenta (13).

Tacita Dean was born in Canterbury, England and lives in Berlin, Germany. She has won the Kurt Schwitters Prize (2009) among many other awards and has recent exhibitions at documenta (13), Kassel, the New Museum, New York, Turbine Hall Tate  Modern, London, MUMOK, Vienna and the Museo Nacional Centro de Arte Reina Sofia.  She has worked in a variety of media, including her large scale chalk on blackboard drawings, from which the Fatigues series is drawn. 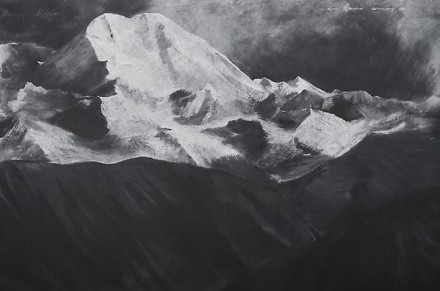 The large scale chalk on blackboard drawings of Fatigues were created over the course of a few weeks on-site in a former Kassel tax office. The building played an important role for the series, as Dean used its two stories to create and bolster a narrative structure for her drawings. 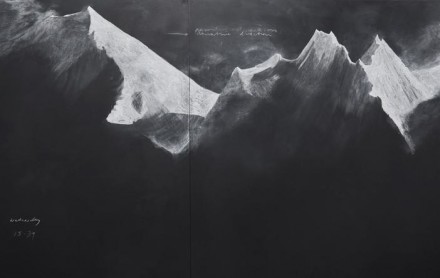 In the upper level of the building, viewers encountered the mountain tops and glacial water sources that followed their course into the images of river beds contained on the lower level. In order to recreate the drama of this architectural story line in New York, the length of the gallery at Marian Goodman is used to convey the spacial relations of the drawings.

Marking the end of a 10 year break from blackboards, Fatigues (2012) depicts the mountain peaks of the Hindu Kush region and the glacial sources that feed the Kabul River. The series is a return to blackboards after Dean’s unsuccessful attempt to make a film in Afghanistan while directing a local cameraman from abroad. However, cinematic traces linger in these striking black and white drawings, especially in the presence of the scribbles and marks. The texts appear like scene notes, giving direction and setting the tone. 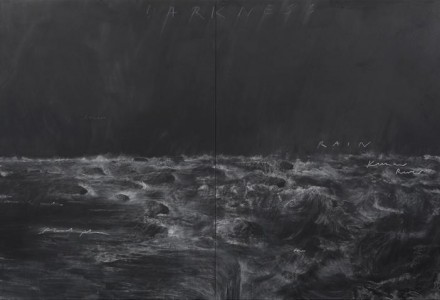 By happenstance Dean later encountered the Rudyard Kipling poem, Ford o’ Kabul River, that also inspired Dean’s fascination with the depicted region and its annual floods. The title Fatigues, is a reference both to the poem’s military implications towards the war-torn region and the way the artist felt working on this series after her commission for the Tate Modern’s Turbine Hall. 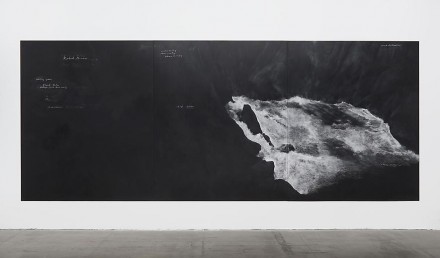 Also on view is the short 16mm film, The Friar’s Doodle (2010).  Originally produced for the Abbey of Santo Domingo in Silos, Spain, it features a drawing given to Dean by a Franciscan friar while she was a schoolgirl in the 1970’s. Filmed in extremely close proximity to the candle, one never achieves to see the full space of the picture.  This ambiguity of space can be related back to the drawings and the impossibility of grasping the power and potential of a landscape all at once.  The sensation is heightened by the small scale of the projection screen dangling in the middle of the large exhibition space. 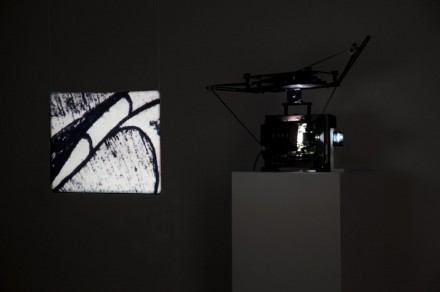 Parallel to the exhibition at Marian Goodman Gallery, Dean will also have a solo show in March at the ADAA Fair and will also install her works in two Philadelphia institutions, the Arcadia University Art Gallery and the Fabric Workshop.  Fatigues is on view until March 9th. 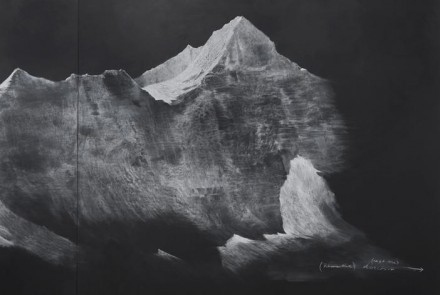 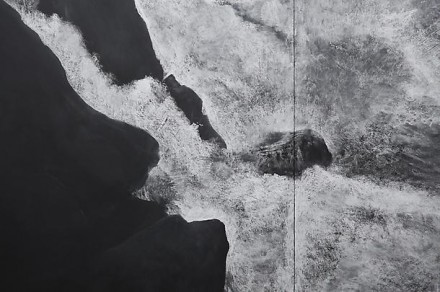 This entry was posted on Sunday, March 3rd, 2013 at 10:09 pm and is filed under Art News, Go See. You can follow any responses to this entry through the RSS 2.0 feed. You can leave a response, or trackback from your own site.