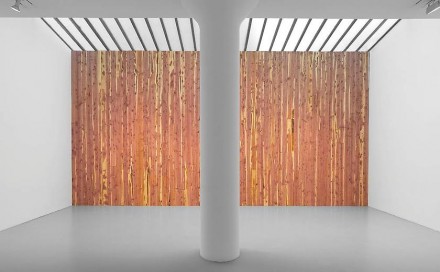 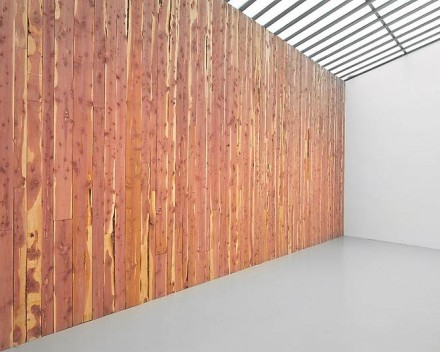 Consisting of only two pieces, Overton’s new exhibition relishes in a unique breed of minimalism.  Working with simple materials and juxtapositions, Overton constructs works that seem charged with a certain “otherness,” commonplace objects that, while immediately recognizable, maintain a certain distance from easy accessibility.  Conversations between elements, between pieces, and between spaces are allowed to develop naturally, allowing the viewer’s interest to move between the works on view. 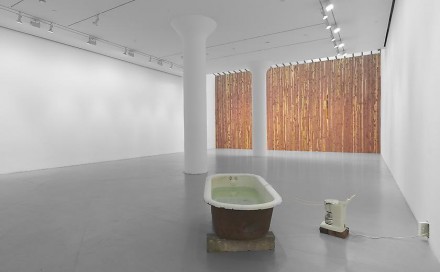 Overton’s assemblages here create a remarkable dichotomies of weight and exertion.  The heavy, industrial planks of Red Cedar (taken from Overton’s family farm in Tennessee in Untitled (Juniperus Virginiana) (2013) enter into gracefully arranged configuration as a fragrant, towering wall.  Calling to mind the scarred floor of an Appalachian cabin, Overton pulls this environmental image off the ground, turning turns the perception of the room on its ear.  The viewer is equally daunted by the seeming weightlessness and immense heft of the piece, and is forced to continually reevaluate the focal points of the room, noting how the expanse of wood brings structural elements into play with its plane of vision. 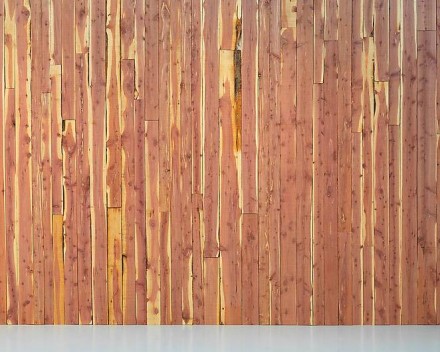 On the other end of the gallery, Untitled (hot tub) sits in stark contrast.  Instead of the clearly machined nature of her wooden wall, the piece is constructed from readymade objects.  Pressure and heat keeps a flow of water moving between the two elements of the work, signaling their interplay by the occasional rattling of rubber hose against the side of the tank.  Stripping the flow of energy within the work to a bare minimum, Overton makes explicit the forces driving the work forward, while humorously alluding to a satirical depiction of rustic pragmatism. 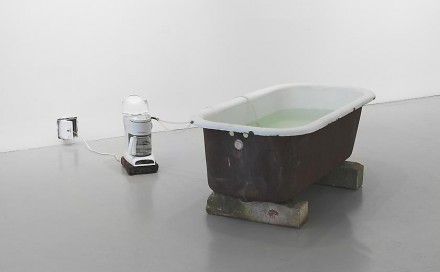 Using the inherent qualities of each work to their maximum effect, Overton blurs the line between individual pieces and installation.  While viewing Untitled (hot tub) the visitor cannot avoid the bold color field of the back wall.  Conversely, the occasional clanging and bubbling that emanates from the tub draws attention towards the back of the room.  One has to wonder if a viewer is even intended for the work, or if the interplay between objects is the intended effect, two sides sounding off against each other ad infinitum.

Virginia Overton’s show is on view until April 6th. 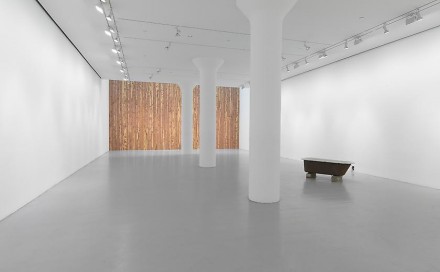 This entry was posted on Friday, April 5th, 2013 at 10:34 pm and is filed under Art News. You can follow any responses to this entry through the RSS 2.0 feed. You can leave a response, or trackback from your own site.