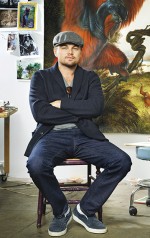 Actor Leonardo DiCaprio’s charity foundation held a charity auction this week at Christie’s, in New York, realizing a staggering $38.5 Million in sales, and surging past estimates of $13-18 Million.  Benefitting several conservation projects for endangered species around the world, the auction allowed money paid over the estimated value to be counted as a tax deductible contribution, encouraging rampant spending that set impressive auction records for artists Rob Pruitt, Robert Longo, Mark Grotjahn, and several others.  As DiCaprio said before the event began: “bid as if the fate of the planet depends on us.”

This entry was posted on Wednesday, May 15th, 2013 at 1:40 am and is filed under Art News. You can follow any responses to this entry through the RSS 2.0 feed. You can leave a response, or trackback from your own site.