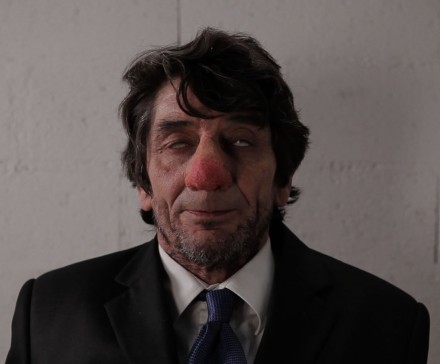 Sneeze to Squeeze is the first solo exhibition of work by New York-based video artist Mika Rottenberg in Sweden. Exploring the themes of labor, production and contemporary body-image, this major exhibition captures the spirit of the artist’s broad range of filmic work, while also offering a thorough, studied look at her work in installation and photography. 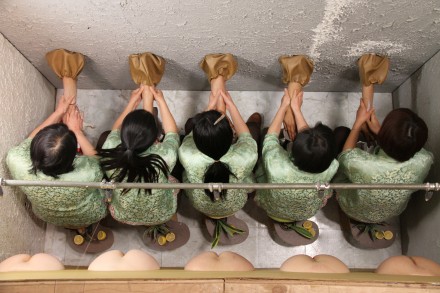 Mika Rottenberg was born in 1976 in Buenos Aires, Argentina but raised in Israel. Rottenberg has an M.F.A from Columbia University in New York and lives and works in the city since ten years back, her current studio space is in Harlem. Rottenberg was at a young age exposed to the art of filmmaking, her father was a film producer, and this may be a contributing factor to her skills in mastering as well as ability to experiment with the craft of visual storytelling through sound and moving image. All of Rottenberg’s films are collaborative efforts, all characters she features in her films are professionals who have previous experience in showcasing their “oddity;” ranging from actors, body builders to exceptionally long-haired individuals. 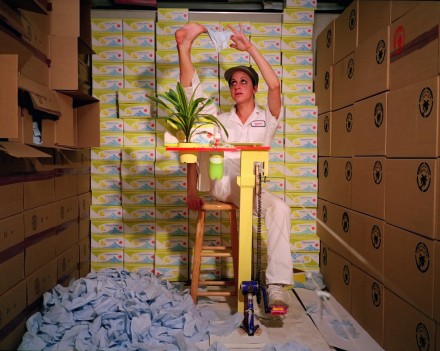 The exhibition title is a play on the titles of the works on view, underlining the comically referential titles of Rottenberg’s numerous video works: Tropical Breeze (2004), Sneeze (2008), Cheese (2008) and Squeeze (2010), each approaching similar thematic and visual subject matter from Rottenberg’s unique perspective and voice.  An avid reader of Marx, Rottenberg’s work is constantly informed and shaped by his theoretical approach to the rhetoric and values ascribed to labor and production. 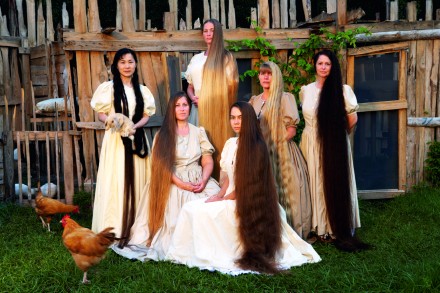 In each of her selected video works, Rottenberg’s characters find themselves engaged in bizarre, unique rituals of production, creating goods through intriguing and repetitive actions.  Tropical Breeze (2004), screened inside a wood crate, illustrates one such process, with a woman chewing gum, repreatedly picking up a tissues from a pile by her toes, wrapping the chewing gum in it and attaching it to a clothing line that is hoisted down to a sweating driver, who then pats the tissue with sweat. The tissue is then sent for packing and marketed as a moist tissue wipe. In Sneeze (2008), a large-nosed man sneezes and objects pop out of his nose. Rottenberg’s latest work, Squeeze (2010), was first screened at Mary Boone Gallery, despite the artist’s representation by Nicole Klagsbrun and Andrea Rosen, and returns to Rottenberg’s familiarly odd characters and settings, engaged in the production of various commercial objects. 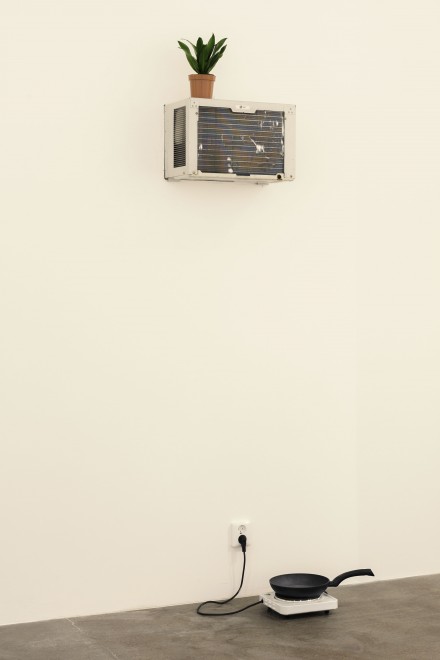 Cheese (2008) is a more complex piece, both ideologically and technically. It is a romantic exploration of the lives of six women on a utopian farm, shown combing and washing each other’s hair, interacting with the farm animals, carefully milking their goats and making cheese.  Rottenberg was inspired by the Sutherland Sisters who lived close to the Niagara Falls and were known for their long hair, part of a sideshow in Barnum & Bailey Circus at the turn of the century.  Deconstructing the images of the feminine mystique through her images of cheese production and its contrast with her subject’s flowing hair, Rottenberg creates new dialogues on the social imagery of food production and the female form.  Other pieces on view include the onomatopoeic sculpture Tsss; a dripping air conditioner above a frying pan, and Mary’s Cherries, another colorful piece depicting women working at roles intricately connected with cultural production and labor.

Throughout the work, Rottenberg makes explicit the relationship between body and production, the human actor intricately wrapped up in the process of labor, and in the product itself.  The method of production itself becomes the notable aspect of the work, moving beyond the consideration of the final product to examine the system that creates it. 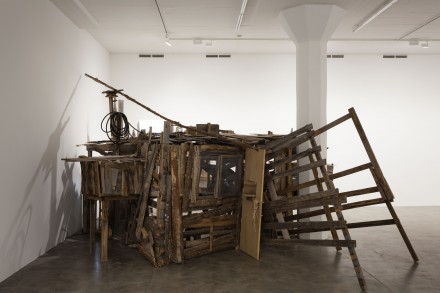 Sneeze to Squeeze is curated by Magasin 3’s curator Tessa Praun, who has a track record of organizing groundbreaking exhibitions at the institution with artists whose practice touches on the political and societal through film.  Ai Wei Wei, Marijke Van Warmerdam, and Smadar Dreyfus have all been welcomed to Stockholn’s premier center for contemporary art. The kunsthalle, founded by financier Robert Weil, is privately owned and headed by David Neuman. Since their founding in 1987 the institution has amassed a collection with over 600 works of art. Its current exhibition closes on June 2, 2013.

This entry was posted on Friday, May 31st, 2013 at 11:48 am and is filed under Art News. You can follow any responses to this entry through the RSS 2.0 feed. You can leave a response, or trackback from your own site.