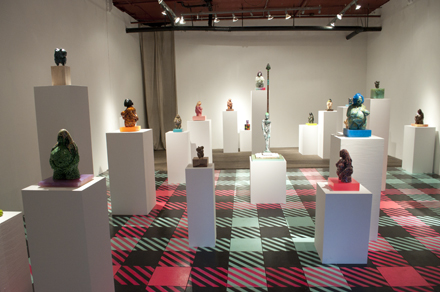 This past weekend, locals, gallerists, collectors and other art enthusiasts flocked to Bushwick, Brooklyn for the seventh-annual Bushwick Open Studios, organized by nonprofit community group Arts in Bushwick. With over 550 spaces participating, many with more artists than one, it was impossible to see everything, even for the most dogged observer. Art turned out at every corner—in galleries, art studios, apartments, bars/restaurants, shops and event spaces— in this rapidly-developing district with a concentration of studios and gallery spaces that rivals Chelsea. 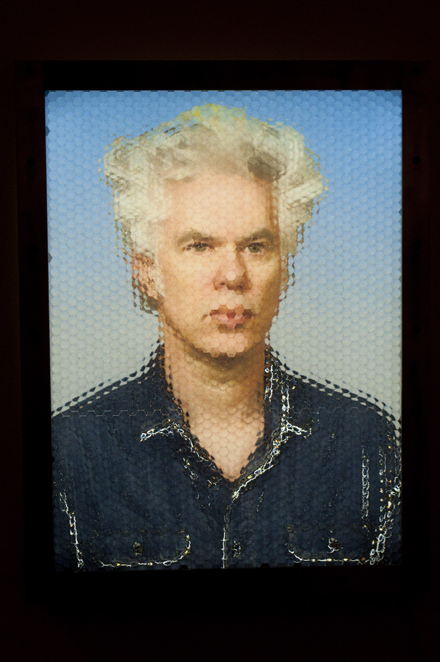 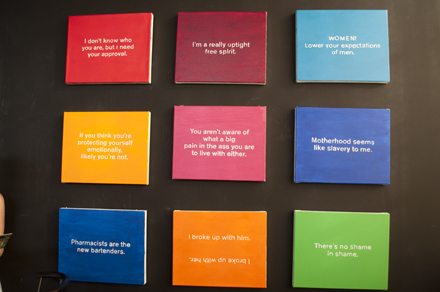 The work on view ranged from high-brow (the first-floor galleries at 56 Bogart Street put on a fine showing of beautiful work) to low-brow (a street-corner juggler near the Morgan L stop), and brought the community out in force — defying 90+ degree temperatures, glaring sun and oppressive humidity to support, celebrate and enjoy all that the Bushwick art scene has to offer.  ArtObserved was on-site over the course of the weekend, and has compiled these highlights:

At Microscope Gallery on Charles Place, 3-D lightbox portraits of Jim Jarmusch and Robert Frank by M. Henry Jones stood out, even as locals worked outside on a new mural for the wall shared by the gallery and Little Skips, the coffee shop next door. 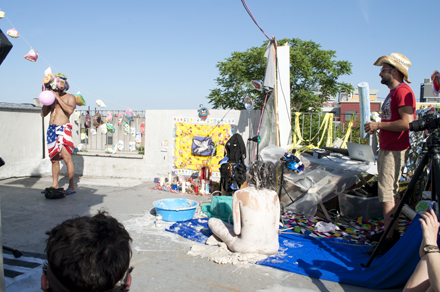 The Jeffersonian, at 148 Jefferson Street, offered several floors of work by artists including painter Gustavo Riziero, (who seems to share more than just a first name with Klimt), Shery Aliberti (sculpture, installation), Felix Morelo (performance), Lorraine D. Glover (installation), and an array of others. The rooftop played host to ongoing performances and evening projections, as the Manhattan skyline glittered through the hot summer haze.

At Storefront Gallery, two columns by Jack Henry dominated the main space in a show that opened May 30, while next door, Collections, a new vintage shop whose debut coincided (quite purposefully) with open studio weekend, offered small works on paper by friends of the owner. 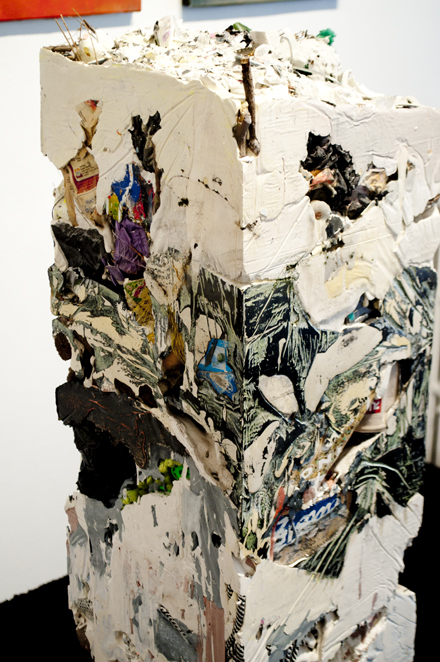 Across Flushing Avenue, Rock Street hosted a fantastic pop-up sculpture park, featuring some of the most intriguing work of the expansive event, including live music Saturday night and works by 19 Brooklyn artists including Rico Gatson, Kevin Curran, Liz Atzberger, Jack Henry, JR Larson and Kris Scheifele.  Often pulling from the imagery and environments of their native Bushwick, the artists’ pieces felt strangely at home next to the adjacent Boar’s Head Deli Meats factory, combining images of urban decay and renewal into a compelling and cohesive exhibition. 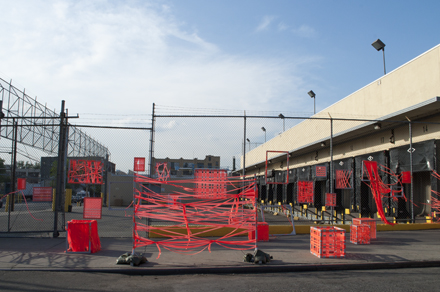 Down the street, the massive loft building at 56 Bogart had the feeling of a full-on art fair: busy, exciting, and overwhelming. Reflective shows by Chloe Bass (Bureau of Self Recognition, on view through June 30 at Momenta Art,) and Lisa Levy (across the hall) asked viewers to pause and review our daily banalities. 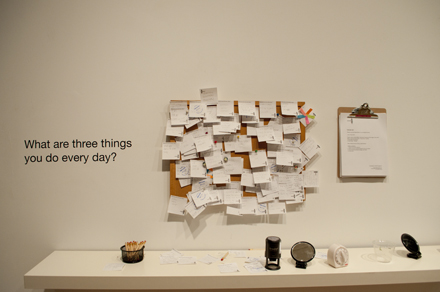 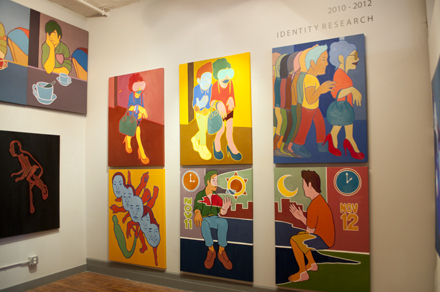 At another big loft building at 41 Varick Avenue, Dennis McNett’s woodblock print sculptures kept eyes moving, while around the corner at 513 Johnson Avenue, Gwyneth Scally’s paintings were a dark and dramatic delight. At nearby Interstate Projects, Anna K.E.’s solo show, I Suppose My Doctor is Dead posed a vague but delightful expression of “non-graspable charm,” (according to the press release) toeing the line between literal and subjective experience. Next door, Kurt Steger’s wooden found-object sculptures were a structural evaluation of the causes and effects of debris. 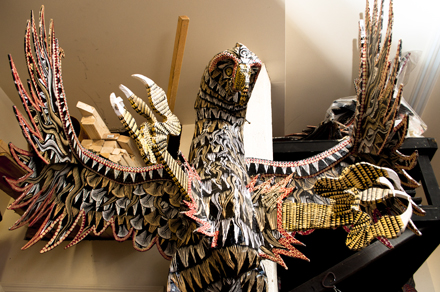 Sculpture by Dennis McNett at 41 Varick

Nearby at studios adjoining English Kills Gallery at 114 Forest Street, (which on Saturday opened “Psychic Birth,” a stunning sculpture show by David Pappaceno on view through June 23), visitors were treated to a true open-studio experience. Artists including Markus Alkire, Darren Goins, Todd Bienvenu and Mary Martin opened their spaces and were on-hand to chat about the work over drinks and snacks. 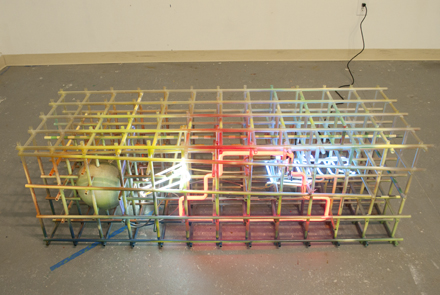 Smaller spaces on side-streets, like Kelly Fondry’s apartment at 64 Troutman and Rebecca Zlouf’s home at 37 Troutman, offered intimate insights into the life and work of artists who make do with modest home studio spaces. Christina Chobot’s paintings at 37 Troutman stood out. Across the block, an ongoing house-party at 64 Jefferson kept it lively with a rotating cast of more than 25 artists (paintings, drawings, films, installation) and live music from several local bands. 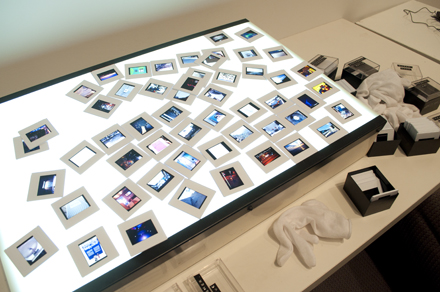 Between stops, art-hoppers sought reprieve from the heat in air-conditioned bars and restaurants, as local kids played in water gushing from the unlocked fire hydrants on many blocks—all of which contributed to the sense of community Arts in Bushwick may have hoped to foster since opening the inaugural open studios seven years ago. 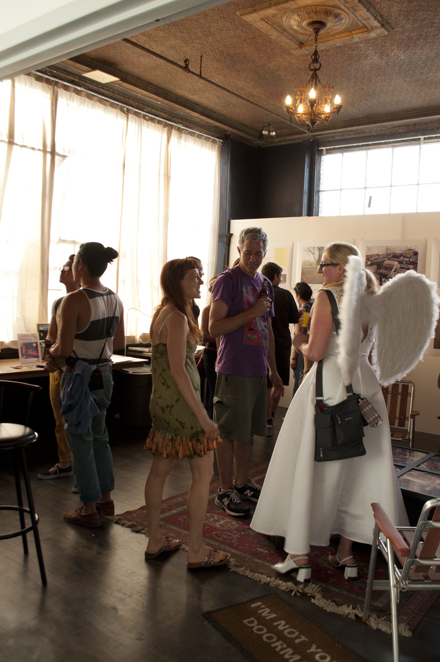 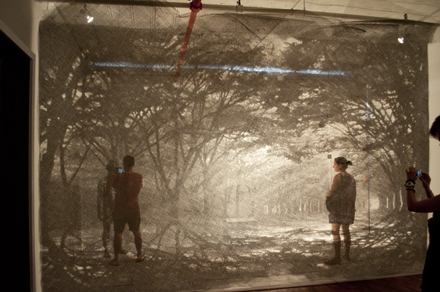 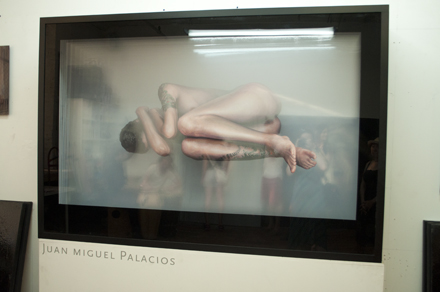 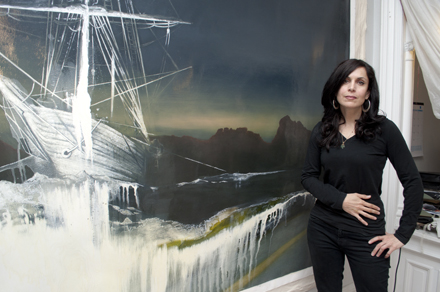 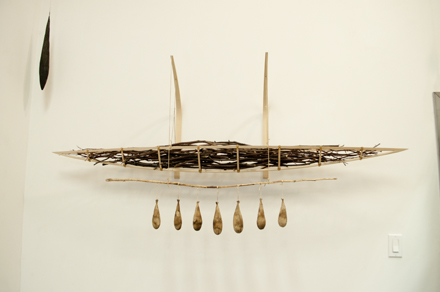 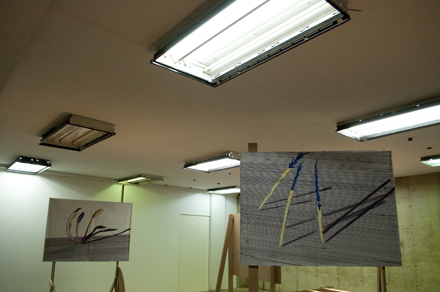 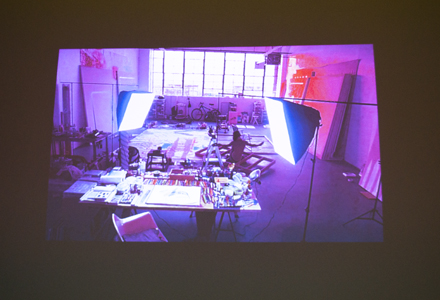 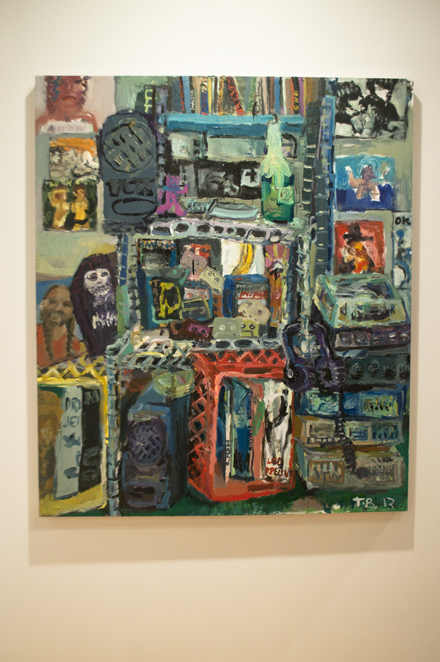 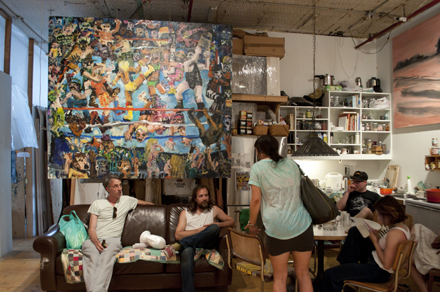 Todd Bienvenu, (right, on couch) with friends and guests at 114 Forest 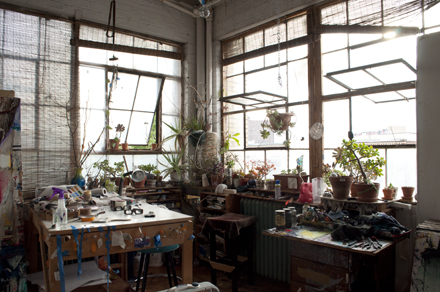 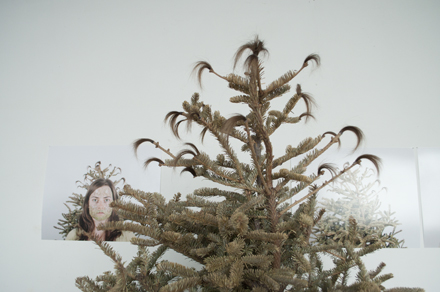 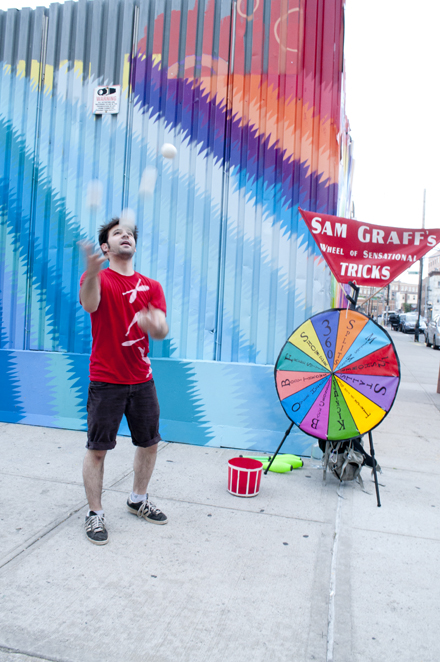 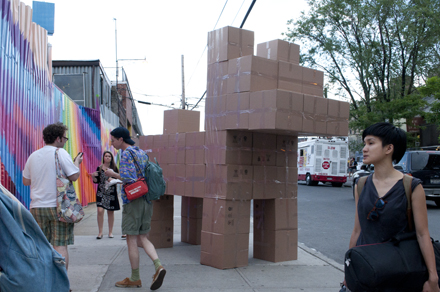 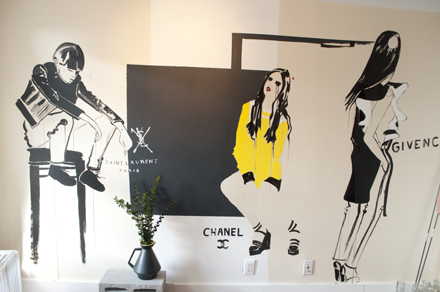 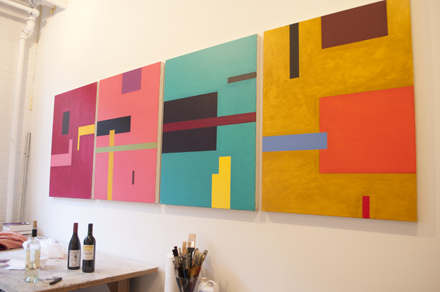 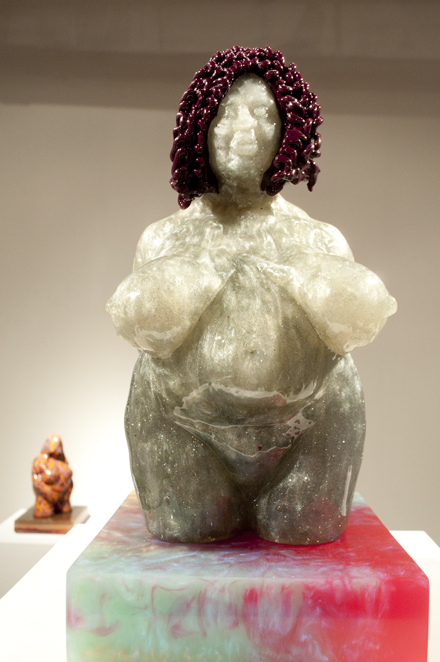 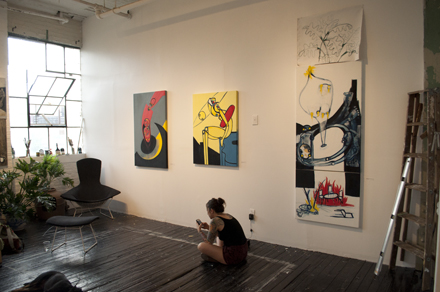 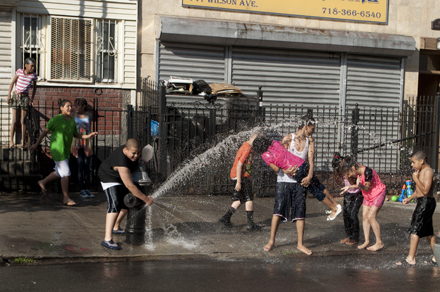 Fun in the hydrant on Wilson Avenue during Bushwick Open Studios.

This entry was posted on Thursday, June 6th, 2013 at 12:23 pm and is filed under Art News. You can follow any responses to this entry through the RSS 2.0 feed. You can leave a response, or trackback from your own site.