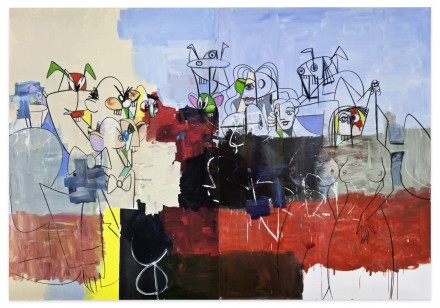 For the past thirty years, George Condo has created visceral, challenging works that blend art history and theory with an irreverent worldview that make his sculptures and canvases explode with life.  Currently, the artist is exhibiting a selection of  his Drawing Paintings and bronze sculptures, created in 2012, for his third solo show with Sprüth Magers, Berlin. Condo has a long standing relationship with the gallery that started almost 30 years ago, when Monika Sprüth hosted one of Condo’s first solo exhibitions in Cologne in 1984. 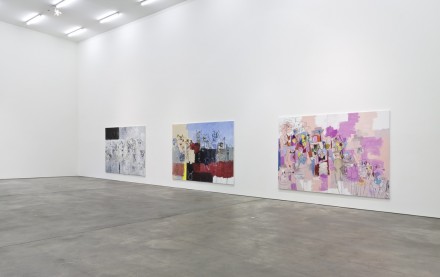 During the 1980’s, the New York-based Condo helped revive figurative painting, bringing the techniques and forms of the Old Mastersinto a contemporary dialogue by his use of classic primers, glazes and formal drawing practices, juxtaposed with his bizarre, often violent depictions of his subjects. His work explores the fixation on light in the religious Baroque-era, while paying special attention to the tones of the likes Rembrandt, Caravaggio, Rubens, and Velazquez. Through these figures, Condo adds a healthy dose of cubist vivacity, bending the human form through a distorted, hyper-extended lens.  The absurd aspects and atmosphere of Condo’s works, which are both dystopian and sympathetic, pointing to the paradox of human existence. 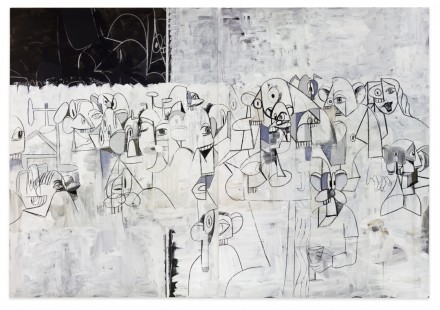 The large format Drawing Paintings are the most recent works in Condo’s continued investigation of art history, and can be viewed as part of the Expanded Canvases series from the mid 1980’s. In his newer works, the Old Masters are left behind, as Condo moves into the territory of Abstract Expressionism.  De Kooning’s lines are met with the color and forms of Matisse and Klee, then rendered with the frenzy of Pollock. Picasso also makes an appearance, unmistakably referenced in the work Figures and Masks. 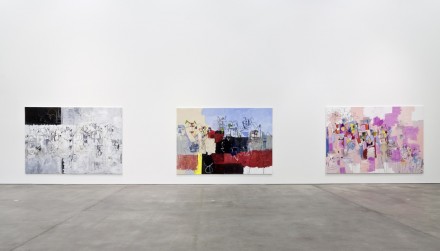 The Drawing Paintings  are aptly named, as their mix of charcoal, pastel and acyrlics blend the distinctions between the two. This blend also occurs in Condo’s use of figurative and abstract elements, his mix of color and line creating both beauty and terror. These oppositional forces project a psychological sphere onto Condo’s canvases, and bring his thematic excavations form the art history canon into clear focus.  It is not merely a practice of referential creation, but a synthesis, bringing much of the art language to bear on a single subject. 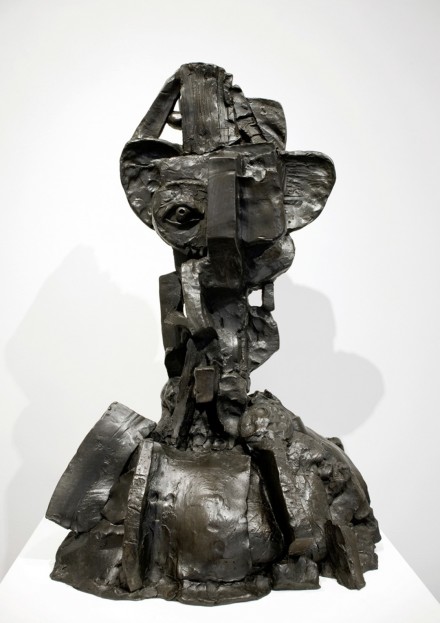 The five bronze sculptures on display are an example of another reoccurring theme in Condo’s work, his exploration of Cubism. Here again, Condo is interested in the psychological aspects he can draw from the subject and style. Instead of using the figurative fragments to create a whole typical to Cubism, Condo combines the emotional elements of the piece to suit his liking. Similar to his paintings, Condo employs extremes, such as attraction and repulsion, or ecstasy and madness to create his sculptures. 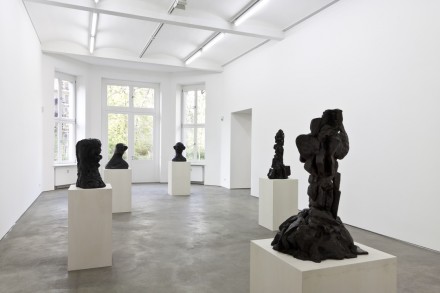 The success of Condo is not in his ability to mine the depths of his own creative lineage, but rather his skill at transforming its language at the service of his own viewpoint. Condo creates a new aesthetic through his deconstruction and reconstruction of old forms, moving  them into a contemporary conversation. 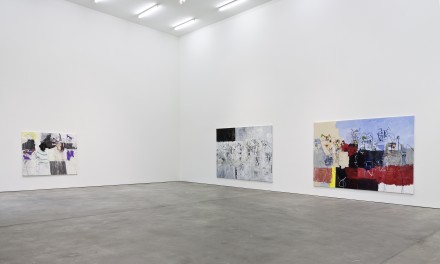 This entry was posted on Monday, June 10th, 2013 at 3:24 pm and is filed under Art News. You can follow any responses to this entry through the RSS 2.0 feed. You can leave a response, or trackback from your own site.