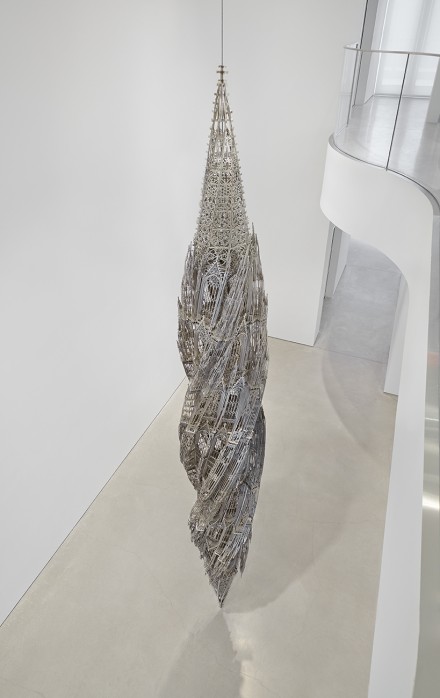 Belgian artist Wim Delvoye has continually pushed his signature brand of surrealist social critique over the past 30 years, creating works that subvert societal norms with a trenchantly humorous twist.  Often using the forms of classical art and architecture, Delvoye twists and bends these forms to create new dialogues with his medium, his subjects, and his own era. Cultivating a number of recent laser-cut works in steel and bronze, Sperone Westwater is currently presenting a minimal, yet potent review of Delvoye’s current work, examining his ongoing explorations of gothic architecture, religious symbolism, and modern psychology.

The show comes several months after Sperone Westwater hosted a similarly critical look at modernity with Fabio Viale’s Stargate, which included, among other works, a fragmented recreation of Michelangelo’s Pieta, sans Mary.  Destroying the revered form and meanings of the original work, Viale presented a cutting critique on the consumption of sacred objects and religious devotion to the image.  Working on a more physical plane, Delvoye warps the image of the crucifix itself, wrapping it around itself into the quite modern double helix shape, reminiscent of DNA chains.  Here, the religious artifact contends with the forms of modernity, with both sides leaving the interaction fundamentally changed. 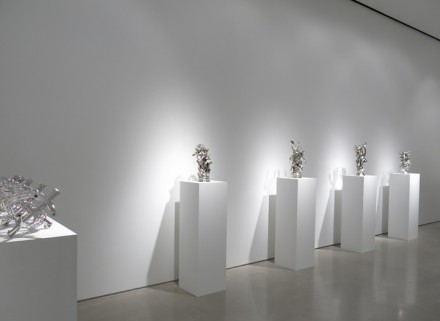 In other works, Delvoye has returned to his enormous, laser-cut gothic works, carving the towering spires and ornate detailing of post-renaissance architectures into curving, spiracular forms.  Abstracted from any broader architectural body, the towering fragment becomes a mirror image of itself, a pure image of scale and direction removed from its original context.  Despite their intricate beauty and scale, the works seem unmoored, as if something had been lost in the translation. 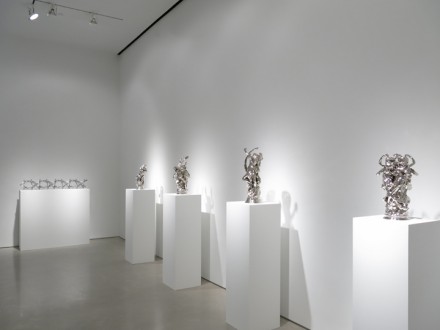 The show also includes a series of Delvoye’s Rorschach works.  Taking classical Greek sculpture, and bending his subject matter into mirror images, looping and curving around itself, Delvoye presents a work alienated from its source material, inherently tied up in the process and practice of contemporary analytical psychology.  On viewing them, the viewer must strive in many cases to make that connection between the eras, presented initially with a nearly undefinable mass of movement and form.

Throughout these works, this sense of modernity and alienation continually resurface, locked together in a pathetically comical dialogue.  Potent symbols of antiquity are relegated to modern rhetorics, or, rather, locked into them, unable to be understood in their original context.  Modern neurosis is sublimated through Greek mythology, or rather, embedded into the story itself, as if the contemporary critic has lost the language to evaluate the work from a purely aesthetic angle.  In a similar vein, Delvoye’s crucifixes and cathedrals must turn geoemtric tricks of their own to remain readable, carved into new forms that defy gravity and convention in favor of their technological splendor. 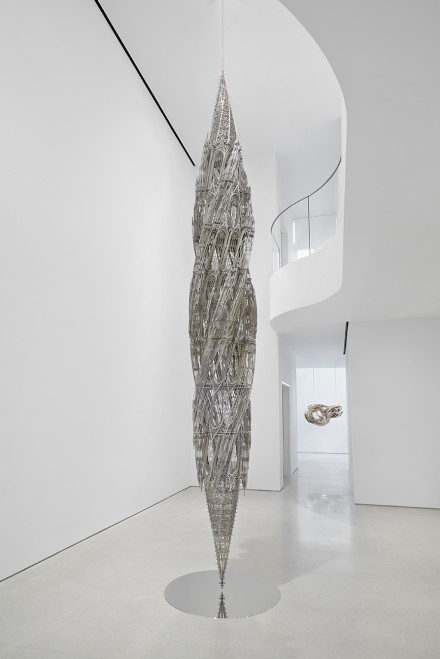 Equally beautiful and confounding, Delvoye’s works offer a potent look at the body of contemporary art, questioning in no small terms what the gradual separation of arts, religion and daily life have evoked on the fusion of each.  While the average viewer may find themselves offended or impressed by Delvoye’s grand reworkings of symbolic images and techniques, they may find that they have no language to express why: a point the artist seems intent on driving home.  Delvoye is on view at Sperone Westwater until June 28th.

This entry was posted on Wednesday, June 26th, 2013 at 8:38 am and is filed under Art News. You can follow any responses to this entry through the RSS 2.0 feed. You can leave a response, or trackback from your own site.