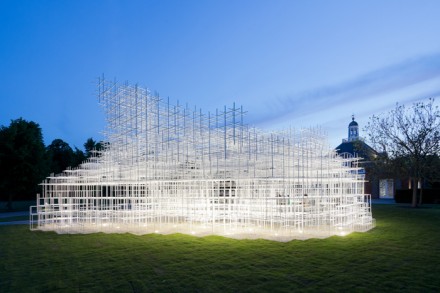 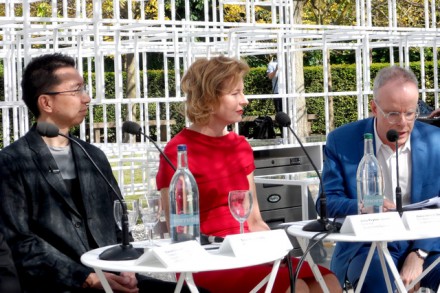 Fujimoto, Peyton-Jones, and Obrist, via BloombergThe Serpentine’s annual pavilion project was begun in 2000, used as a space for the gallery’s annual fundraising party, as well as a location for various panel discussions, interviews and other events during the warm summer months in London, and the announcement of the winning design for the temporary structure has since become one of the most anticipated events of the architectural and contemporary arts calendars.  Past winners have included designs by Pritzker Prize winners Zaha Hadid (2000), Rem Koolhaas (2006), Frank Gehry (2008), Jean Nouvel (2010) and Peter Zumthor (2011). 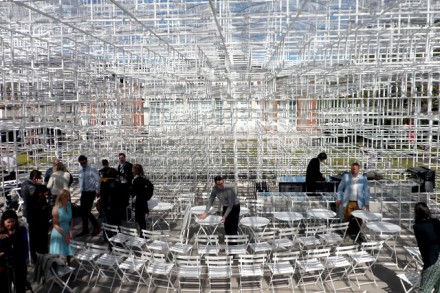 Inside the Serpentine Pavilion, via Bloomberg

Fujimoto’s design, a grid-like, white structure of 27,000 pieces of tube, glass and paneling, locked into a series of densely interconnected white cubes that gives the illusion of a cloudy, apparitional climbing structure rising up from the grounds of Hyde Park.  Chosen for its intricate marriage of natural imagery and mass-produced construction implements, the design comes at a time when the world of fine arts is seeing a renewed focus on ecological and environmental concerns, driven in part by the Serpentines’s Obrist.  “I tried to create something like nature, but by artificial methods,” said the architect. “The whole shape is rather organic, like a cloud. At the same time, the whole thing is made by really sharp industrial materials.” 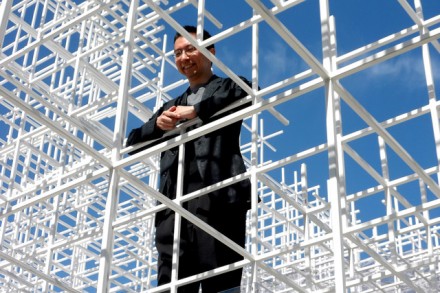 Fujimoto on his design, via Bloomberg

Fujimoto has been an ongoing presence in the international arts community, alongside his well-regarded design career.  His work at the Japanese pavilion of 2011’s Venice Biennale won him a share of that year’s Golden Lion.  His design will remain installed until October 20th of this year.

This entry was posted on Tuesday, June 11th, 2013 at 12:35 am and is filed under Art News. You can follow any responses to this entry through the RSS 2.0 feed. You can leave a response, or trackback from your own site.