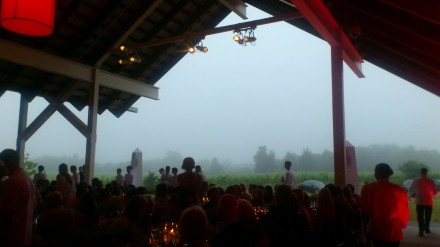 The Parrish Art Museum held their annual Midsummer Party this past Saturday, an essential event in the Hamptons social calendar, welcoming benefactors and guests to the museum’s newly completed home. 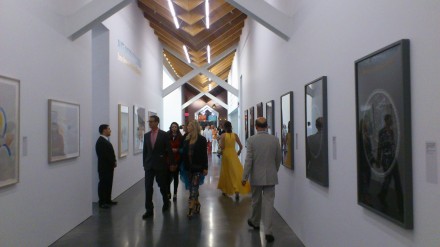 Guests inside the museum

The evening’s guests were a generous crowd.  Dinner tickets varied between “Steel level” tables at $50,000 to “Aluminum level” singles at $1,500, and the gathered visitors wasted no time in praising the Museum’s handsome new building designed, by Swiss architecture firm and Pritzker prize winners Herzog de Meuron.  The Basel-based architecture firm has designed several other galleries and museums including the Tate Modern, Walker Art Center, Museum Der Kulturen, and the Serpentine Gallery, and are currently working on Contemporary Art Museum Barranca de Huentitán, Mexico and Unterlinden Museum, France, among other projects.  Ada Louise Huxtley described them as refining “the traditions of modernism to elemental simplicity, while transforming materials and surfaces through the exploration of new treatments and techniques.”

The view of the Parrish Art Museum from the fields, courtesy of Herzog & de Meuron.

Initially, the plans were different: a set of smaller buildings interlocking with each other, but the economic downturn of the past few years caused current director Terrie Sultan to renegotiate with the firm to create a design that would fit more in line with the museum’s financial capabilities, ending at $26.2 million.  The result is a 34,400 square foot sleek long one floor linear building, consisting of seven galleries, sensitive to the landscape, and situated in a field of high grass.  The slanted roof and beams inside the protruding roof indicate that the firm wanted the building to reminisce a barn.  For inspiration, the firm turned to the surrounding environments, and visited artists’ studios, pulling the stylistic elements of floor to ceiling windows, and east-west orientation of the structures which maximizes the natural coastal light and the choice of material – concrete, metal, wood, glass – giving the building a crisp contemporary feel. 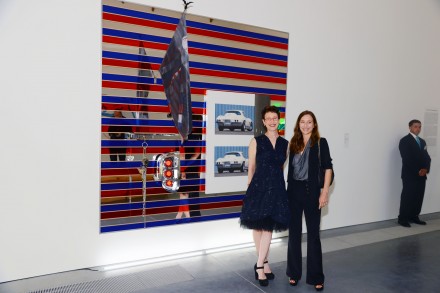 During the benefit, all the museums galleries were open.  Guests could browse through the exhibitions on view; including a new show of drawings by Alice Aycock exploring the ideas and sources behind the large-scale outdoor sculptures she is known for. Aycock was on hand for the event, as was artist Josephine Meckseper, who had five sleek, large-scale pieces on view. 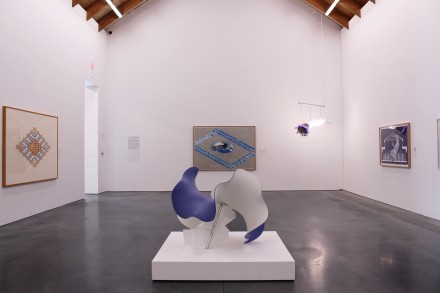 Artist Donald Sultan was on hand.  The artist was known for his large-scale still-life paintings using unexpected materials, and was showing an eye-catching black and white one depicting peonies as part of the collection’s current showing. His long-term friend Keith Sonnier, who also has work in the Parrish Art Museum collection was present.  Other notable artists with work in the collection were on hand, including Connie Fox, Eric Freeman, Mel Kendrick, William King, Dan Rizzie,Dorothea Rockburne, Cindy Sherman, Ned Smyth, Michelle Stuart and Joe Zucker. 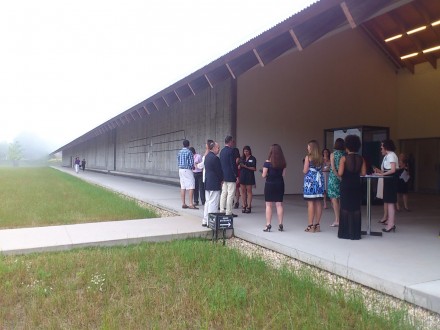 Guests Outside the Parrish Museum.

With the new building, the museum is for the first time in its 115 year history, able to exhibit work from their 2,600 piece collection, which ranges from the 19th century to present. The galleries are excellently designed for their purpose, with natural light streaming from the floor to ceiling windows, ceiling inlets and other windows.  Viewers could see and experience the contrasts of Esteban Vincente’s vibrant paintings in the larger gallery, wandering through the space from room to room. The museum also specializes in “East End artists,” artists coming from and working in the region.  In American Visions: artists at home and abroad, many of the motifs came from the area. 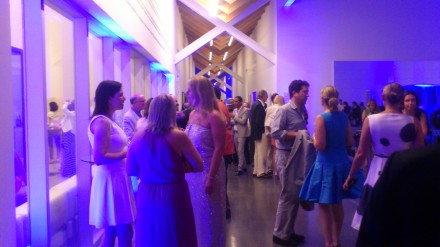 After the cocktail, held in the atrium, guests continued on to the end of the museum, an open air-porch where long tables were set, in-line with the long, sleek architecture of the building. Notable guests included Karen & her husband hedgefund manager Bill Ackman, art patron Beth Rudin DeWoody who has a home in South Hampton, Gale & Ira Drukier, Etta Froio, Amanda & Glenn Fuhrman, Andrea Glimcher, Elizabeth & David Granville-Smith, Jamee & Peter Gregory and Agnes Gund. Kathy Hilton, who graciously offered me cigarette outside while stopping for a chat with the museum volunteers. Designer Eric Javits, power-couple David Maupin, gallerist and Stefano Tonchi, editor in chief for W. Nicole Miller, and many more. 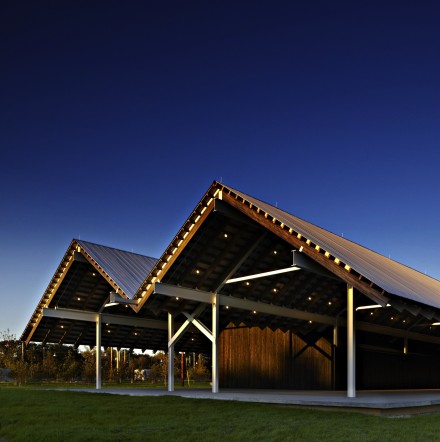 The benefit was held on a weekend when the Hamptons was overflowing with two art fairs: Art Hampton and artMRKT, both held in Bridgehampton with an international roster of exhibitors.  The after party, opportunely named After Ten, began with a crowd of collectors, art industry professionals, socialites and party goers from the Hamptons filling up the museum to celebrate the rebirth of the Parrish’s gallery spaces. 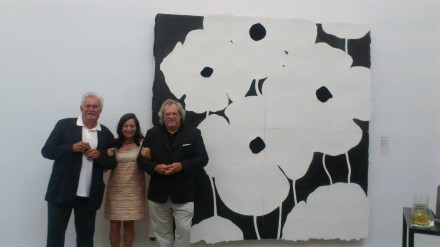 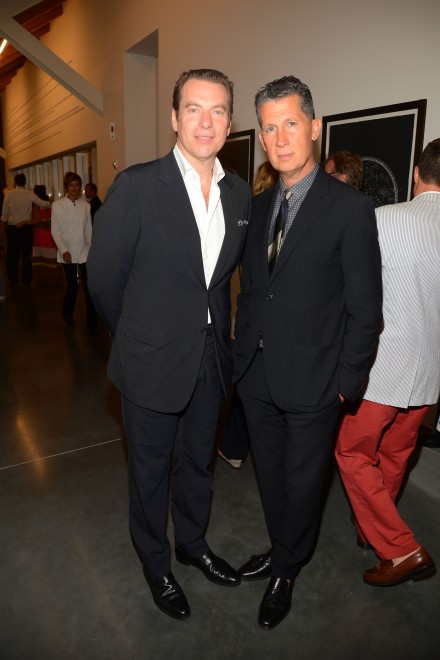 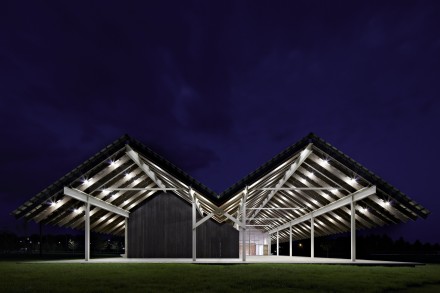 Outside the Museum, courtesy of Matthu Placek 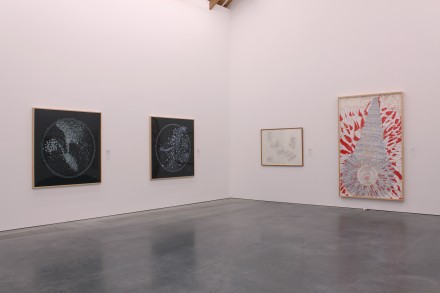 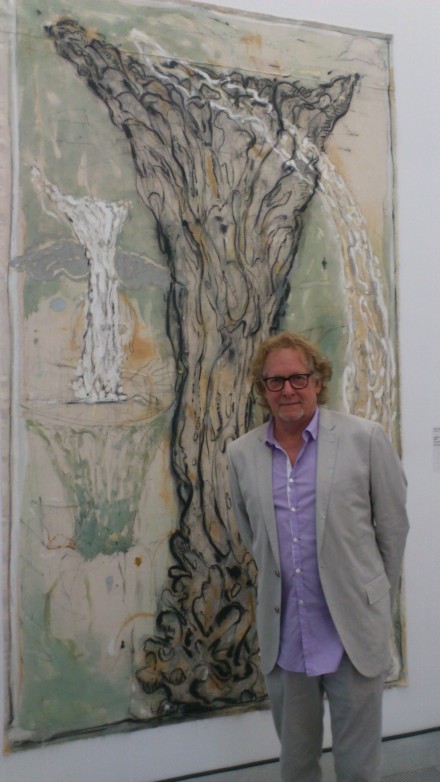 Bryan Hunt in front of his piece Veil Falls 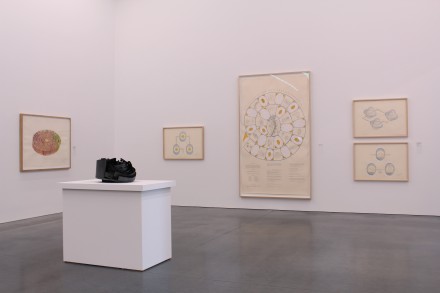 This entry was posted on Friday, July 19th, 2013 at 12:27 pm and is filed under Art News. You can follow any responses to this entry through the RSS 2.0 feed. You can leave a response, or trackback from your own site.