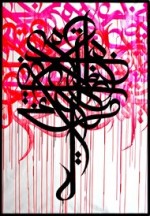 Jeffrey Deitch will once again exhibit in New York, the New York Times reports.  The current curator of MOCA has announced a soon to open show at Leila Heller Gallery in Chelsea, focusing on the intersections of graffiti and calligraphies in contemporary art.  Opening September 5th, Calligraffiti: 1984-2013 will feature work from over 50 artists, including Basquiat, Haring, Shirin Neshat, an eL Seed.  ”Graffiti has become an important part of the imagery that has defined the Arab Spring.”  Deitch writes in the catalog.  “Today new communications platforms like Instagram and YouTube have given street art a new resonance.”Read more at New York Times

This entry was posted on Wednesday, August 21st, 2013 at 7:06 pm and is filed under Art News. You can follow any responses to this entry through the RSS 2.0 feed. You can leave a response, or trackback from your own site.