Currently occupying multiple floors of the New Museum is a series of works by artist Ellen Gallagher, a painter and multimedia artist whose work is layered and deeply informed by contemporary and historical references, not only from modern art historic and literary canons but also politics, popular culture and sub-cultures such as Black Power and Detroit Techno.  Represented by two major galleries, Gagosian and Hauser & Wirth, Gallagher’s intellectually conversant work has tantalized critics and collectors alike for the past 20 years. 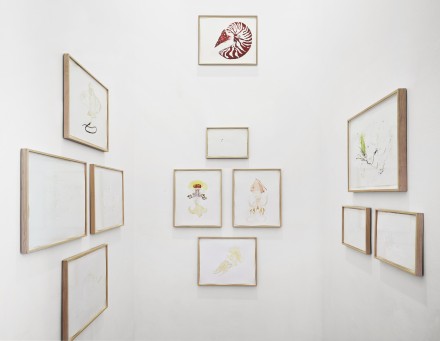 Ellen Gallagher was born in Providence, Rhode Island, in 1965, and lives and works in New York and Rotterdam, Holland. She studied writing at Oberlin College, Ohio and later earned a degree in Fine Arts from the School of the Museum of Fine Arts, Boston. The following year, she was accepted to the competitive Skowhegan School of Painting and Sculpture in Maine.  She also spent a college semester at sea studying oceanic micro-climates.  Gallagher is African-American; her father’s ancestry stemming from Cape Verde in Western Africa and her mother is Irish. Her bi-racial background is an important foundation in her artistry, and influences much of her work.

The New Museum exhibition is held on three floors of the museum, comprised of thirty works, and curated by resident curator Gary Carrion-Murayari.  Characteristic for Carrion-Murayari is a cross-generational, forward-thinking approach that includes the show “Ghosts in the Machine” and a role curating the 2010 Whitney Biennial.  A simultaneous retrospective, somewhat larger, and showcasing close to a hundred works by Gallagher, is being held at London’s Tate Modern, an indication that Gallagher’s artistry also has resonance across the Atlantic. 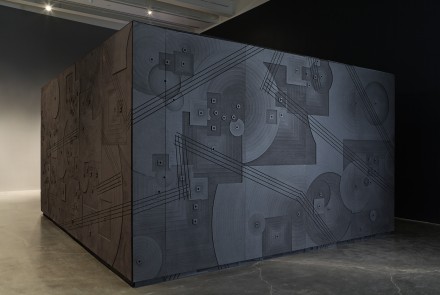 Gallagher has worked across a range of medias, from appropriated advertisements highlighting marginalized black imagery to paintings paying homage to the minimalism of Agnes Martin and the subtle repetition of Gertrude Stein. The exhibition begins with Gallagher’s early paintings from the 1990’s, using the signature bead-like eyes and enormous red lips of blackface performance, abstracting them as a series and variation.  The show also explores her  futurist fantasy works in collages, drawings and paintings from 2005, including a Sun Ra-inspired spaceship, abstract imagery from Krazy Kat cartoon, and references to Paul Klee.  The stairwell down to the next gallery tells the story of the Drexciya, an underwater Atlantis inhabited by slaves who died during transport from Africa.  The work, titled Watery Ecstatic (2001-05), consists of an intricate series of drawings, carved into thick water-colored paper.  Nearby, the installation Osedax (2011) consigns a loop of two films simultaneously, a collaboration with Gallagher’s partner Edgar Cleijne. Upon entering the box, the viewer is exposed to a 16 mm film of a shipwreck of the coast of Rhode Island and abstract painted glass slides accompanied by the song “Message from a Black Man” by the 70s funk band Whatnauts. The pseudo-scientific piece is inspired by an undersea worm that burrows into the bones of whale carcasses.

Gallagher’s newest paintings surround the black-box installation.  All untitled works, Gallagher created images on the verge of abstraction by scraping away layers of red and pink foundations, and using ink to enhance silhouettes and forms of the canvases that are all of the same size and format. Some look like coral, or worm-like organisms, another features a bird perching on a branch. 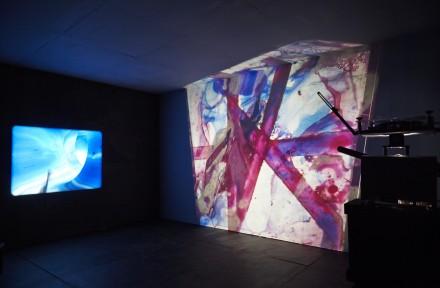 Gallagher received the American Academy Award in Art and a Joan Mitchell Foundation Fellowship. Solo exhibitions include Whitney Museum of American Art; Museum of Contemporary Art, North Miami; St. Louis Art Museum; and the Institute of Contemporary Art, Boston. Gallagher’s work has been included in La Triennale at Palais de Tokyo in 2012, Whitney Biennale 2010 and 2003 and Venice Biennale 2003 and held in many major public collections, including MoMA and Metropolitan Museum of Art in New York and Centre Pompidou, Paris.  Her show is on view until September 15th.

This entry was posted on Friday, August 30th, 2013 at 12:00 am and is filed under Art News. You can follow any responses to this entry through the RSS 2.0 feed. You can leave a response, or trackback from your own site.