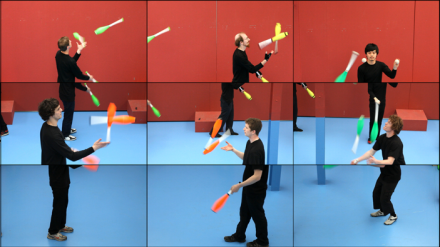 The Jugglers, June 24th 2012 (2012), the U.S. premiere of artist David Hockney’s first video installation, presents a panorama of bright color and whirling objects, tinged with mordant humor. In a darkened room on the second floor of the Whitney, the viewer will find a bare theater with a single long bench and eighteen screens arranged in a grid. The screens switch on to reveal a composition of red and blue horizontal blocks almost as flat as Hockney’s early acrylics. Also bearing similarities to his Polaroid collages, Hockney has chosen to create a fractured composition using video to achieve the same effect by combining feeds from eighteen different cameras mounted in his Yorkshire studio on a sunny day. The light is even and saturates the space, permitting no highlights or shadows, and without figures, the red and blue studio looks relatively seamless on the screen.

The piece begins in earnest when a wheezy accordion groans to life, playing the familiar tune, “The Stars and Stripes Forever,” and the first in a long train of jugglers enters the field on the furthest screen to the right. The multi-perspective, staggered camera works of The Jugglers cuts the man in pieces, fracturing his body and transporting his juggling balls magically from screen to screen, as if the viewer had missed a few frames each time he throws the ball in the air.  This lone juggler is followed by a train of semi-competent, black-clad compatriots, who send their pins and wheels somersaulting through the air and all over the grid of screens. This simultaneity can be thrilling or nauseating, depending on one’s ability to divide their attention.  If the viewer pays close attention to a single patch, they may catch a few pins crashing to the ground, followed by one of the jugglers surreptitiously snatching them up so as not to wreck the grindingly slow pace of the group’s circuit around the studio. These moments of failure add a degree of humor to what might otherwise be a purely formalistic enterprise, and seem to jive well with the surreal, comic warble of the soundtrack. 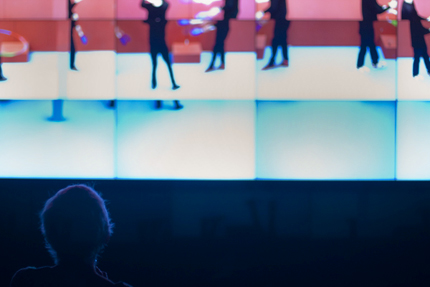 Inside The Jugglers installation via Danny Penny for Art Observed

A certain, detached air of American candor pervades the work, perhaps justifying The Whitney’s exhibition despite Hockney’s British origins falling outside the museum’s traditional focal points.  Looking back in on the abstracted spirit of U.S. patriotism, it reads almost as a perspective from abroad, a moment of pause to reflect on America as seen by a longtime foreign resident.  After nine minutes, the train finishes its progression and the studio returns to its empty state; the screens flicker off as the music winds down, until a single hand reaches into the bottom rectangle and plucks a forgotten pin off the floor. The lights come back on and the audience rubs their eyes, stands up, and walks out, staggering out of the theater as if exiting a tilt-a-whirl and scratching their heads. Given Hockney’s recent iPad painting evangelism, the installation seems to contend with how modern life is increasingly mediated by technology, though any specific contention or question remains somewhat obscured. 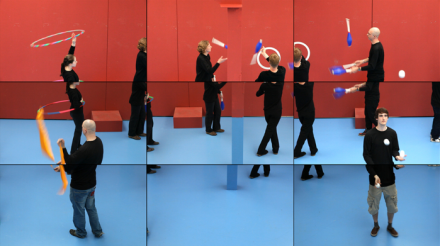 No matter Hockney’s direct aim, The Jugglers clearly fits into his oeuvre, a re-exploration of the flat space of his acrylic paintings and broken perspectives found in his Polaroid collages, now re-imagined with the help of a new technology. Whether The Jugglers leans towards a celebration or a critique of this new technology remains unresolved, hanging in the air long after the screens have gone dark.  The video is on view until September 1st. 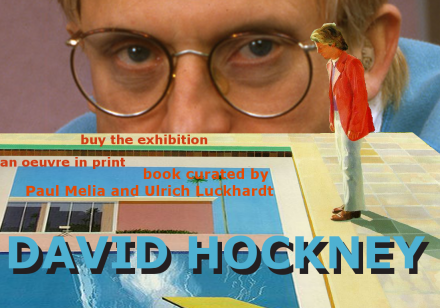 This entry was posted on Friday, August 23rd, 2013 at 12:52 am and is filed under Art News. You can follow any responses to this entry through the RSS 2.0 feed. You can leave a response, or trackback from your own site.