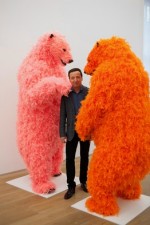 The Wall Street Journal reports on the recent opening of Galerie Perrotin’s New York space, which shares the building at 909 Madison Avenue (a former Bank of New York branch) with Dominique Lévy Gallery.  With three spaces in Paris, and one in Hong Kong, Emmanuel Perrotin’s growing gallery network has finally found root in New York’s fertile art world. “For many artists around the world, their New York show is their most important,” He said.  It is, according to him,  “the dream of every ambitious gallerist, because within one kilometer of this gallery, you have more collectors than anywhere else in the world.”

This entry was posted on Saturday, September 21st, 2013 at 6:54 pm and is filed under Art News. You can follow any responses to this entry through the RSS 2.0 feed. You can leave a response, or trackback from your own site.