May 17th, 2022
REFERENCE LIBRARY
Home » Jan Krugier’s Collection to Go to the Auction Block at Christie’s 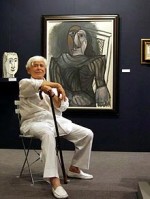 A broad selection of works from the late collector Jan Krugier’s enormous art collection is set to go to the auction block on Nov. 4th and 5th at Christie’s in New York.  Consisting of 156 works, the selection of works includes an incredible 29 Picassos, as well as works from Henri Matisse, Alberto Giacometti, Joan Miró, Jean-Michel Basquiat, Georgia O’Keeffe and Robert Rauschenberg, with a total estimated value of $170 million.  “Krugier saw himself as but a temporary possessor of these works. I think he’d rather like it.”  Said Christie’s deputy chair Conor Jordan.

This entry was posted on Tuesday, October 29th, 2013 at 4:54 pm and is filed under Art News. You can follow any responses to this entry through the RSS 2.0 feed. You can leave a response, or trackback from your own site.