Exploring the spectrum of American “high” and “low” culture, David Zwirner Gallery is currently exhibiting a display of works from Raymond Pettibon entitled To Wit, which will continue through today, October 26th. 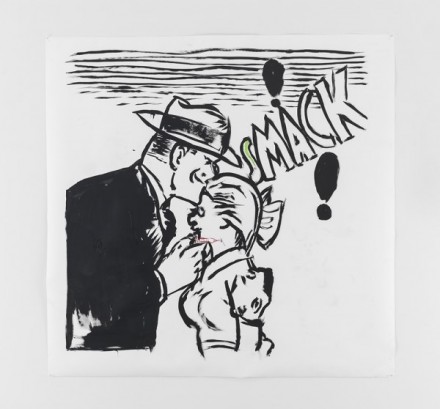 Raymond Pettibon first became well-known when he designed the logo for the influential punk band Black Flag, started by his brother Greg Ginn. Pettibon adopted this new surname around the same time. Moving on from his early graphic work in Southern California’s punk rock scene, both designing logos and flyers for various bands and concerts, the artist broadened his scope, drawings influenced by mainstream comics, and often including ironic or ambiguous text.

To Wit stems from the Middle English infinitive “to witen” which meant “to know.” The word is also used in legal documents and technical writing, and its usage as the title of the show gives a formal tone to the seemingly casual arrangement of the works. Pettibon has been interested in the past in language and its many uses. The expression “to wit” has also been used recently in blog writing and news broadcasting, so that, as the gallery has written about the show, “‘to wit’ is at once Shakespearean, legal, and tweetable.”  Following in this pattern of thought, the show is an arrangement on white gallery walls of colorful, sketch-like drawings and collages intended to portray “fragments from American society.”  These fragments include selections from texts ranging from popular media to William Faulkner and the Bible. Moving freely from wall mounted collage to illustration, and back, the show turns the gallery into a slurred stream of consciousness, text and image giving themselves over in equal measure to each other.

Raymond Pettibon, No Title (Her lips moved…) (2013), via David Zwirner

Playfully coiling mainstream pop references and punk dissonance into his works in equal measure, Pettibon’s exhibition is a fascinating look at the artist as cultural personage.  There is no coincidence that the gallery makes an explicit point to link to his Twitter account in his press release, a similarly blurry, immediate thread of incoherence, unified by the artist’s aggressive stance towards pop culture, the art world, and the general conventions of English grammar.  Applied in a gallery environment, the result here is similarly fresh.

To Wit will continue through tomorrow, October 26th, 2013 at David Zwirmer Gallery in New York. 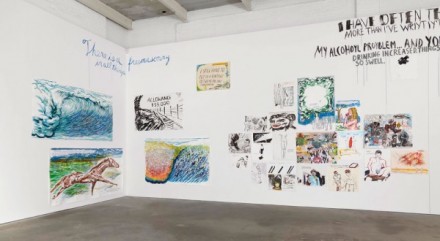 This entry was posted on Saturday, October 26th, 2013 at 6:08 pm and is filed under Art News. You can follow any responses to this entry through the RSS 2.0 feed. You can leave a response, or trackback from your own site.