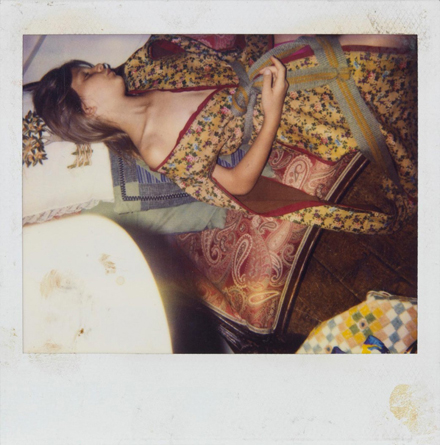 Inaugurating a new ground-floor gallery at 976 Madison Avenue, Gagosian presents The Last Studies, a never before seen exhibition and the gallery’s first partnering with the Estate of Balthus – on display until December 21.

Meant to be a counterpart to Balthus: Cats and Girls: Paintings and Provocations, which presents a thematic survey of Balthus’s early works at the Metropolitan Museum of Art, Gagosian’s The Last Studies explores Balthus’s preparatory photographic Polaroids taken as sketches for his paintings at the end of his career. Lending unique insight into the Balthus’ working process, these small works help to illuminate the continuities and correspondences found throughout the artist’s oeuvre.

Born Balthasar Klossowski de Rola in Paris in 1908, Balthus’s career as a self-taught artist began when he was just 13. Accompanied by a text by Rainer Maria Rilke, who was a family friend, Balthus published Mitsou, a book of 40 drawings. As a young man, he went on to have exhibitions at Galerie Pierre, Paris, and with the Pierre Matisse Gallery, New York. Gaining acclaim in his lifetime a talented painted, notable stage designer, and as the director of the French Academy in Rome, Balthus’s work has achieved international notability.

The current exhibition at the Gagosian Gallery tells the story of the last decade of Balthus’s life, when he was too frail to continue painting, and instead picked up a camera.  In shaky, technically unsound images, the 155 Polaroids illustrate Balthus’s main preoccupation during this time in his life – a young girl named Anna who posed for his camera every Wednesday in the same place, against the same backdrop –  for eight years, from when she was 8 to 16.  Self-mythologizing and mysterious, Balthus was known for his reclusive tendencies during his lifetime – keeping to country homes and castles in France, Italy, and Switzerland – where he finally passed away in 2001.  Like other artists of the 20th century, Balthus used Polaroids to help him mentally sketch his paintings. The images of Anna are fuzzy, repetitive, serial, and underexposed, but among them found in his home studio in Rossinière, Switzerland is one large, unfinished painting – which has been brought to New York to stand among the tiny Polaroids at Gagosian.

The current exhibition is accompanied by a two-volume book published by Steidl in a limited release in which the entire corpus of Polaroids is reproduced.

This entry was posted on Tuesday, November 26th, 2013 at 7:38 am and is filed under Art News. You can follow any responses to this entry through the RSS 2.0 feed. You can leave a response, or trackback from your own site.