New York – Yayoi Kusama: “I Who Have Arrived in Heaven” at David Zwirner Through December 21st, 2013

Yayoi Kusama, Infinity Mirrored Room – The Souls of Millions of Light Years Away (2013), via Daniel Creahan for Art Observed

One may recall the final room of The Whitney’s sprawling retrospective of Japanese artist Yayoi Kusama last year, stacked floor to ceiling with bold, brightly colored canvases.  Flourishing tentacles, patterns of eyes and teeth, cartoonish faces and swirling animalistic forms dominated the work, all delivered with a wide-eyed enthusiasm that made them hard to ignore. 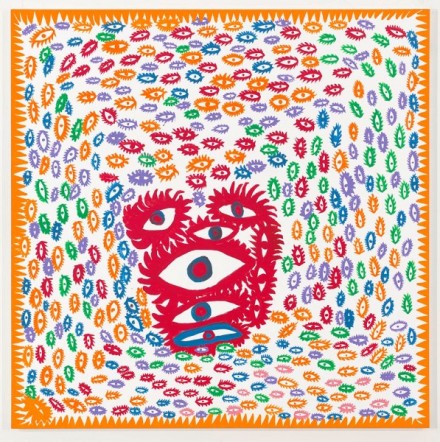 It’s this seemingly boundless energy that marks the artist’s first show with David Zwirner since joining the gallery last year, and which hovers over the sizable body of work, including paintings, two of Kusama’s infamous Infinity Rooms, and an enormous video installation, filling all three of the gallery’s 19th Street spaces.  “I’m fighting for my life everyday, for my art,” Kusama old writers at a pre-opening conference last week. Her conviction is hard to ignore.  Kusama’s work continues to radiate with significance, even into her 84th year, now turning towards considerations of her own death.  Indeed, the show’s title I Who Have Arrived in Heaven seems a powerfully poetic choice, detailing in equal measure an artist aware of the realities and limits of her life, as well as an artist at the heights of her creative capacity. 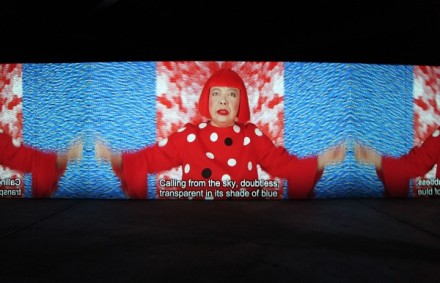 Throughout, Kusama’s wistful, wondrous style feels wholly engrained in the difficult truths of her life: her multiple suicde attempts and current institutionalization notwithstanding.  But Kusama addresses these troubles with a bold honesty, one which makes her large-scale installations all the more powerful.  Her Infinity Rooms, both exploring her trademark aesthetics in different measure, are a fitting example.  Caverns of light and mirrors places the viewer somewhere between the immanent and infinite, fully aware of the space’s limits while their perception extends out ad infinitum.  Nearby, Kusama’s Manhattan Suicide Addict carries a similar force; a looping video of Kusama singing the story of her own attempts at killing herself, backgrounded by the revolving patterns of her art. 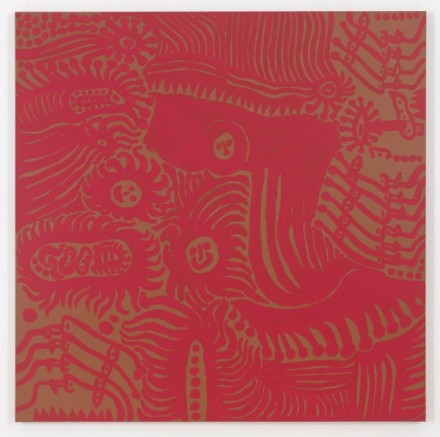 Yayoi Kusama, I Who Have Lost Love (2013), via David Zwirner

In the rest of the gallery, Kusama’s paintings take center stage, playfully arrangements of deep hues and animated characteristics, a testament to the artist’s endless compulsion to create.  Blurring the artist’s personal biography with fantastic scenes and characters, the paintings offer a subdued counterpoint to the power of her installations, moments of reflection that work in tandem with the rest of the show. 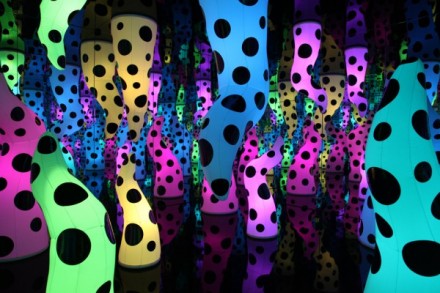 Perhaps its these conjunctures, Kusama’s life and death, fantasy and reality, growing ever closer, ever more intimate, that makes her work here seem so strong.  Kusama sees her limits, but moves far beyond them through her ongoing practice.  Dualities of delicacy and power, love and loss, become a fount of inspiration, with Kusama at the center, mediating between the two worlds.  That she would focus so heavily on death and transition for this show only underscores the eternity that her work seeks to express. 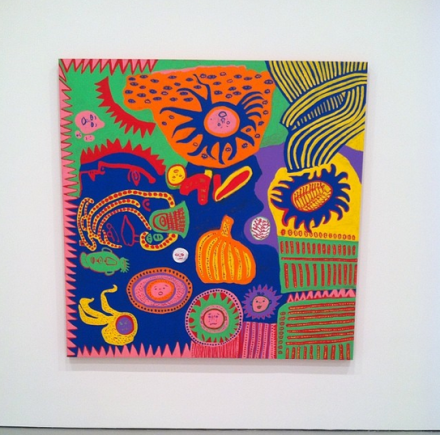 Yayoi Kusama, Where the Youth Is (2013), via Daniel Creahan for Art Observed

“Please spread my love of the world, and my reverence for the universe.”  She asked the audience at the conclusion of her press conference.  Few artists could give a better closing statement. 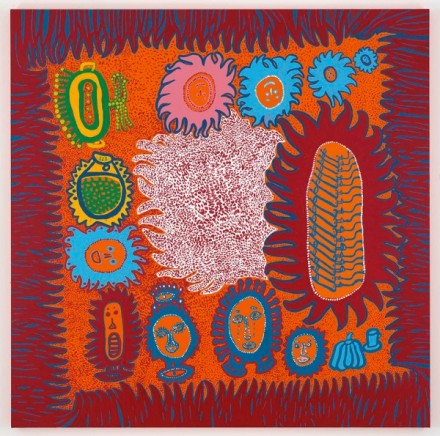 Yayoi Kusama, Flowers in a Memory (2013), via David Zwirner

This entry was posted on Sunday, November 10th, 2013 at 11:06 pm and is filed under Art News. You can follow any responses to this entry through the RSS 2.0 feed. You can leave a response, or trackback from your own site.