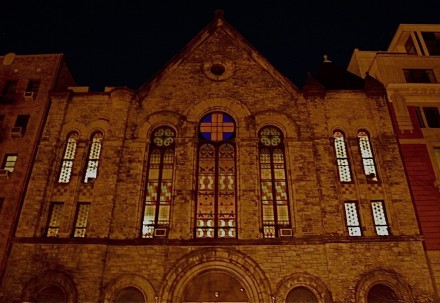 There’s something particularly fitting about the conversion of Harlem’s Mt. Moriah Church by artist Ugo Rondinone.  Long interested in conflations of the human and the spiritual through physical sculpture and architecture (particularly the artist’s ongoing Human Nature series of human rock sculptures installed last year at both Rockefeller Center and Gladstone Gallery), the space fuses its towering facade with both studio and exhibition space inside.  Last week, Rondinone opened his studio and gallery, still under construction, for a private tour, showcasing the artist’s impressive architectural project, and his new exhibition in the space, a series of monochrome paintings by artist Wesley Martin Berg. 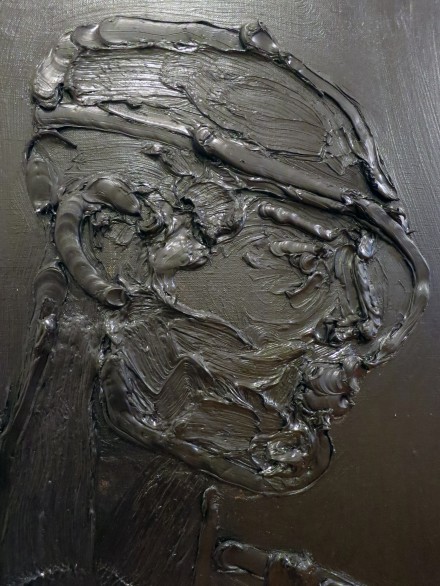 A work by Wesley Martin Berg, via Art Observed

The former church, purchased by the artist in 2011 for $2.775 million, is in the middle of a nearly three-year renovation project, converting it into a dynamic live-work studio space that will, in its finished form, contain a private gallery space, which Rondinone himself will serve as curator for, on top of the artist’s personal living quarters and studio.  The space follows in a running series of artist-curated spaces that have opened in the past year, including Julian Schnabel’s Casa del Popolo space, which opened last summer in the basement of the artist’s West Village home. 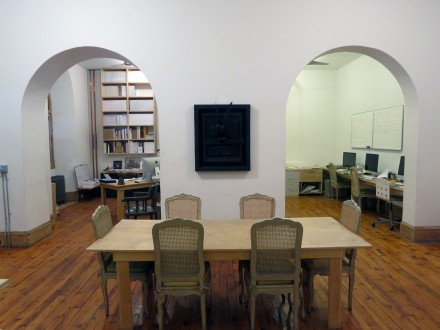 Inside 2050 5th Avenue, via Art Observed

In the well-lit rooms of 2050 5th Avenue, this first show by takes on a strikingly intimate, personal feel; his all-black monochromes heaping clumps of paint onto the canvas to create dense, figurative depictions that move between classical portraiture and abstract studies in painterly technique.  The faces and forms of his subjects seem to surge forth from the canvas, taking shape through thick strands and smears of black and charcoal.  In one of the more notable works, a strong emphasis is placed on his subject’s ear, formed by one or two artful swoops of paint, which lend the work something of a centering force.  With repeated viewings, one can almost watch the painting drift apart, each element of the face moving off into its own study in composition and construction. 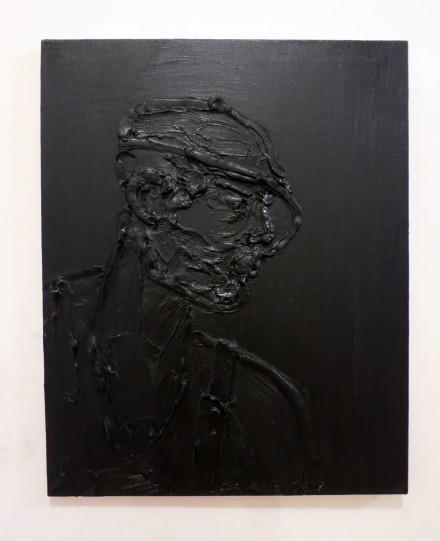 The opening of Berg’s work at 2050 makes for a fitting first show for all involved, tracing Rondinone’s continued blending of classical forms with his own insights, placing his work somewhere between the sacred and the immanent. 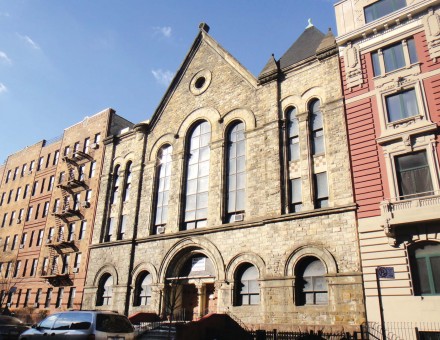 This entry was posted on Thursday, January 30th, 2014 at 12:00 am and is filed under Art News. You can follow any responses to this entry through the RSS 2.0 feed. You can leave a response, or trackback from your own site.