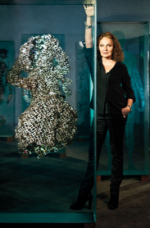 Brooklyn artist Dustin Yellin has created a sculptural tribute to designer Diane Von Furstenberg’s signature “Warp Dress,” mimicking the dress’s iconic form through his own style of collaged paper encased in glass.   The work was created for the 40th anniversary of the design, and was meant to look like “an apparition—as if it just materialized in a dreamlike state,” Yellin says.

This entry was posted on Friday, January 10th, 2014 at 6:10 pm and is filed under Art News. You can follow any responses to this entry through the RSS 2.0 feed. Both comments and pings are currently closed.