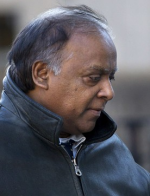 The proceedings over the alleged forgery of Jasper Johns‘ 1960 work Flag has ended with a guilty plea by Brian Ramnarine, the Queens foundry owner who admitted to copying the artist’s work and attempting to sell it for $11 million.  Ramnarine’s admission of guilt means he will not challenge any sentence of 10 years or less in prison, but could spend an additional 20 years for admitting to additional sculpture frauds after his arrest.Read more at ABC

This entry was posted on Wednesday, January 29th, 2014 at 1:10 pm and is filed under Art News. You can follow any responses to this entry through the RSS 2.0 feed. You can leave a response, or trackback from your own site.