London – Jake and Dinos Chapman: “Come and See” At the Serpentine Sackler Through February 9th, 2014 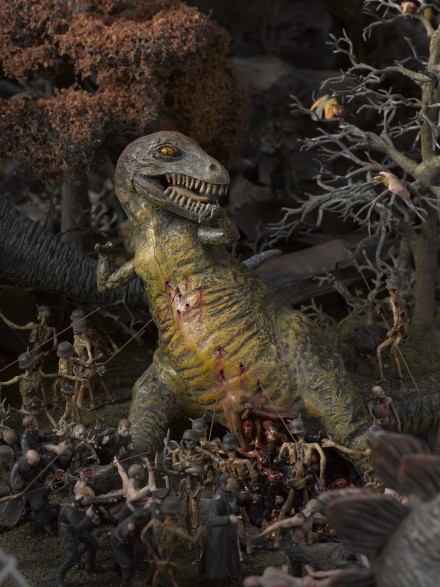 An exhibition of Jake and Dinos Chapman, the English brothers turned artistic-collaborators, is currently on view at the Serpentine Sackler Gallery in London’s Hyde Park through February 9.  Titled Come and See, the show is something of a magnum opus – the Chapmans display an interest in any and all media, from painting to film. Their cheeky disregard to a medium-centric practice allows them to mesh subject material in mock conspiracy-theory style. Posed KKK members, McDonald’s characters and scenes of war and chaos reminiscent of Urs Graf or their frequent muse, Francisco Goya are assembled in an “overtly-designed-chaos” where homage and meaning are tossed about for the sake of pointed caricature. 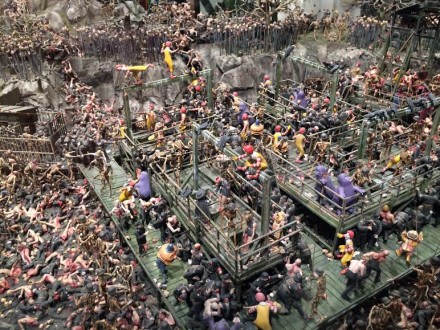 This irreverence is apparent throughout the Chapmans’ practice, but how they navigate between satire and true shock value throughout each work is extraordinary. The Chapmans got their art chops early, working for artists such as Gilbert and George, so it’s easy to sense an explicit self-branding: the war-ravaged landscapes of Hell (2000) and The Sum of all Evil (2012/13) are massive, elaborate 360° dioramas where reproduced en masse Ronald McDonalds, Grimaces, Hitlers, and a cast of nameless soldiers exact vengeance upon one another. The artists are literally crucifying the symbolic heads of political ideologies they themselves find problematic, yet an underwhelming sense of ambiguity to the painfully meticulous arrangements is notable. 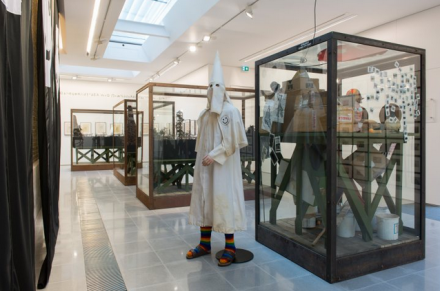 Over thirty mannequins in KKK regalia are also installed throughout the gallery. Some appear to be part of the show itself, as objects standing near or on plinths, while others are placed about the exhibition as though they are actually participating in viewer’s experience. A film plays in one room, as more Klansmen sit amongst the spectators, as well as amongst sculptures and prints, standing off to the side in apparent puzzlement about the work before them. 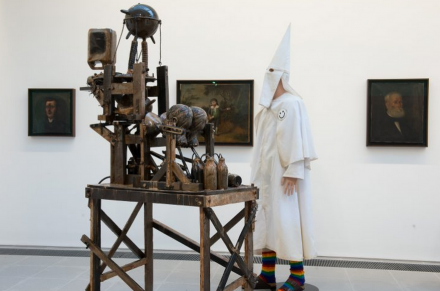 Again, there is no clear message, as the Chapmans seem to devalue any consistent or comprehensible relationship between sign and signifier. The Klansman are identifiable in white robes and hoods, yet each has a smiley-faced patch sewn on to their breasts. In keeping with an earlier work of the Chapmans, where watercolors by Adolf Hitler were acquired and reproduced in mock-hippie-surrealism (If Hitler Had Been a Hippy How Happy Would We Be, 2008), each Klansman also wears Birkenstock sandals and fuzzy rainbow socks. 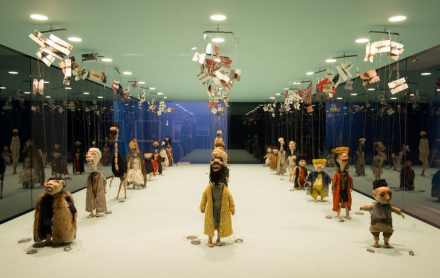 Perhaps an obvious move by co-directors Julia Peyton-Jones and Hans Ulrich Obrist, the adjacent gallery features the work of Wael Shawky, who continues these contrivances of pastiche and mythology. This show centers around three films and collection of ephemera and ceramic marionettes specific to the films. Grappling with an unreliable narrative of history and re-telling Crusade legends and Arabic parables with no specific notion of fact, Shawky is a clear transition from the Chapman’s definition of allegory. 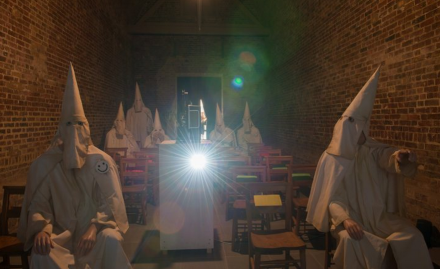 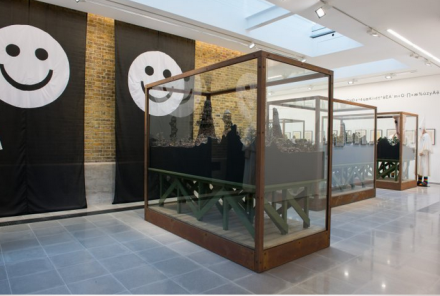 This entry was posted on Saturday, February 1st, 2014 at 12:00 am and is filed under Art News. You can follow any responses to this entry through the RSS 2.0 feed. You can leave a response, or trackback from your own site.