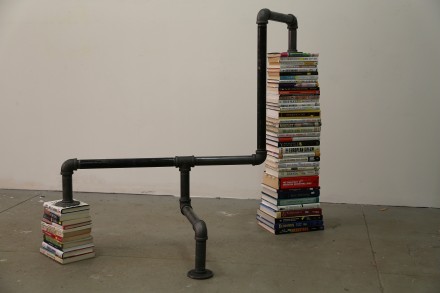 Giandomenico Tonatiuh Pellizzi, better known as G.T. Pelizzi, is currently showing a selection of new works at Mary Boone Gallery in New York.  Pellizi was born in Cuernavaca, Mexico in 1978, and attended St. Johns College, Santa Fe, New Mexico, studying literature and philosophy before going on to the Channin School of Architecture at Cooper Union, NYC, where he received some training in visual arts by attending courses at the School of Art with Walid Raad and Joan Waltemath, among others.  He currently lives and works between New York City and Mexico. 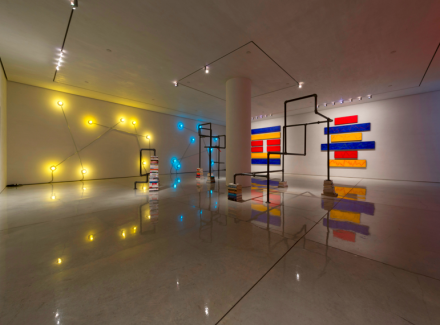 The new body of work derives from the artist’s explorations of the social constructs of the financial system, a complex assemblage valid only due to its widespread acceptance. The artist compares projections and predictions of the future made within the financial system with the same in ancient Greek myths, astrology and the I Ching, all complex systems constructed to make sense of reality. Upon entering the gallery, the visitor is welcomed by a cacophony of visual impressions: pipe sculptures are propped on scaffolding and self-help books on money, with colored light bulbs placed in an almost astrological assembly, while nearby, monochromatic canvases crossed by disjointed lines adorn the walls. It is clear that there are many concepts at play behind the sometimes minimal façade of the pieces on display. Themes of gentrification and city transformation come to mind. 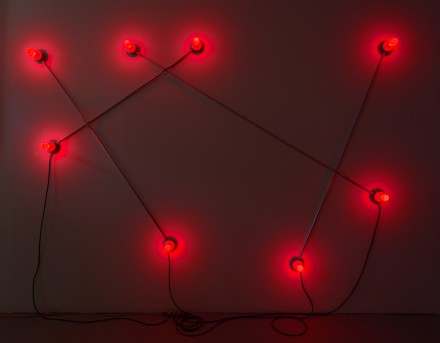 Financial Times is Pellizzi’s third solo show to date, and his first show with Mary Boone Gallery. The forms that he has conceived may recall scientifically-based financial data, or architectural renderings, but they are equally haphazard in construction, and ultimately parody their own forms. He references his background in architecture, toying with “snap lines,” a tool used to set straight lines in building construction, and uses them in hexagrams from the I Ching and graphs inspired by financial readings to create the basis for the curves and lines of his work.  In equal measure, an interest in the history of abstraction and minimalism can be seen. 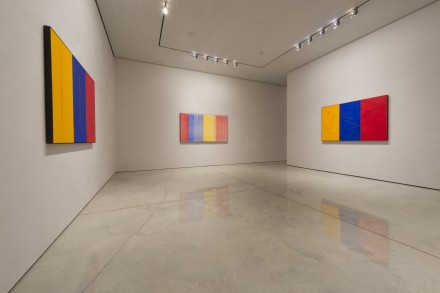 Although Pellizzi has successfully worked as a solo artist for the past three years, and his days working in a shared studio in Bushwick are long gone, his artistry is largely formed by his past involvement in Bruce High Quality Foundation, the anonymous artist collective known for its diverse brand of institutional critique, of which he was a founding member.  Pellizzi, whose first solo show was held at Y-Gallery in 2011, has been widely exhibited including shows at Jeu de Paume, El Museo del Barrio, PAC Murcia, Abrons Art Center, Instituto Cultural del Estado de Morelos, Centre Pompidou, Sala Veronicas, Fundacion Jumex, Whitney Biennial(2010), Bruccenial(2010), Performa(2009), X initiative (2009), Deitch Projects and PS1 MoMA. 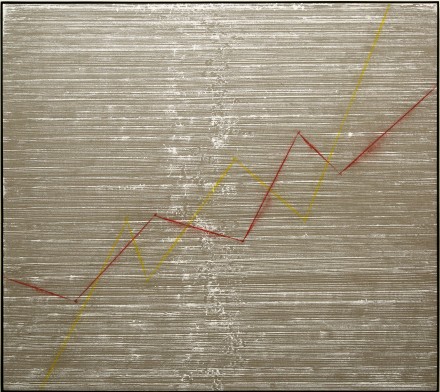 Pellizzi’s rather stealthy entrance into the art world may in part hinge on his long relationship with it.  In his teens he vacationed with the likes of Francesco Clemente and Brice Marden, and during his high school years he worked as a studio assistant for Ray Smith with whom he collaborated on The Execution of Maximilian: Border Paintings (2012) . Both of his parents are anthropologists, and he took painting classes with top scholars in conjunction with a project where his Mexican/American mother worked with painters in indigenous communities in the state of Guerrero Mexico.  His Italian father, the scholar, art critic and collector Francesco Pellizzi, once married to Philippa de Menil, was one of the initial board members of Dia Art Foundation, and is currently editor of Res, a journal of anthropology and comparative aesthetics.

This entry was posted on Friday, February 28th, 2014 at 4:33 pm and is filed under Art News. You can follow any responses to this entry through the RSS 2.0 feed. You can leave a response, or trackback from your own site.