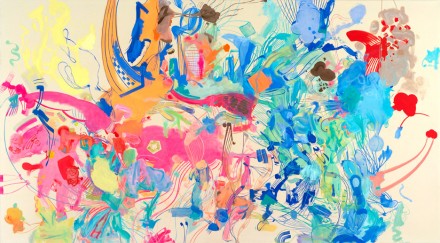 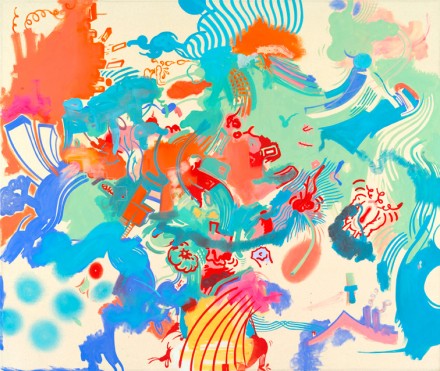 The events of 9/11, which Williams believes to have initiated World War III (better known as the war on terror), inform the chaotic formal complex that erupts across these expansive canvases. Restless contours and squirming lines activate the surface—a volatile mass of compacted churning energy. Careening through blotchy passages of color, bold graphics of a lyrical compulsion become entangled in a maelstrom of shrapnel and anatomical appendages. These organic interludes remind us of the literal subject and human toll of this cataclysmic abstraction. Evoking the terror and confusion of destruction, architectural fragments peek through clustering masses of color, the Twin Towers themselves bending along the compositional curve in a fluid calligraphic arc. 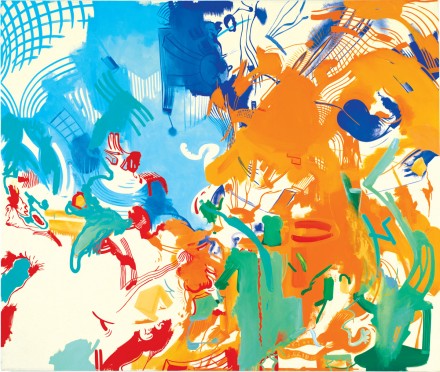 An abstract tempest with representational swells, her bombastic formalism contains sporadic figuration, with wriggling anthropomorphic notes dotting the gestural landscape. A departure from her more explicit genital depictions in earlier work, these new paintings leap into sweeping abstraction that flirts with organic as well as structural allusion. Embedded within the expressionistic entropy are vestiges of her cartoonish and often grotesque characters—the suggestion of bodily parts hidden amongst the dislocating chromatic turbulence. Isometric outlines of buildings, obliterated into hazy memories and flashes of definition, collapse into a dense gestural miasma evocative of 9/11 footage. 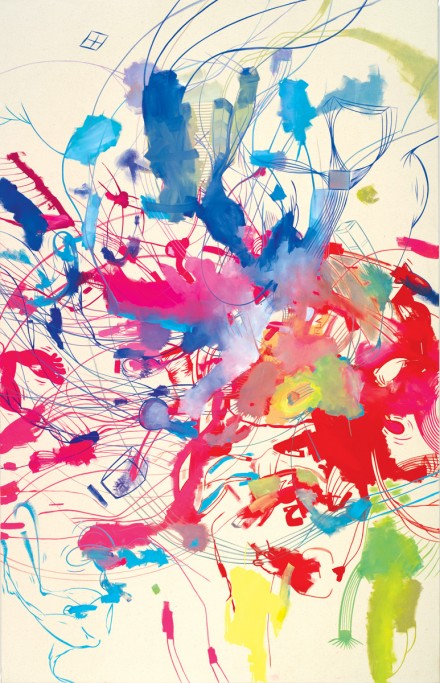 Even so, the bold palette of fluorescent neons and pastels seems to clash with the putative trauma of such a tragedy. The horrific nature of war has been translated into the fantastic aesthetic of a comic, as though the tiny mushroom clouds and contorting buildings heralded an impending comic trope: the ‘BOOM!’ bubble. Williams presents a world turned upside down, the distorted vision of a terror as senseless as war itself.    The titles of the individual works themselves contribute to the show’s sardonic tone, explicating and complicating meaning with political and conspiratorial allusions. From covert government operations to retirement fraud in the NYPD, titles like Philip Zelikow, Historian, Hill and Dale, Black-Ops, and Ministry of Hate, reiterate the skepticism and suspicion Williams has deployed stylistically for the collection.

Williams’ work has regularly engaged in political commentary and social satire. Her 2010 Retrospective at 303 Gallery, curated by Nate Lowman, was titled Al-Qaeda is the CIA, and addressed both her anti-war sentiment as well as issues of sexual and domestic abuse. Often explicit in both her condemnation of government and shocking sexual content, Williams approaches national and gender politics with a candor and crude sense of humor that brings discourse to a human level. While femininity and sexual objectification here take a back-seat to the universalizing war on terror, William’s retains a humanistic agenda. These rapturous abstractions contain both the paradoxical beauty of destruction and the abject absurdity of war. 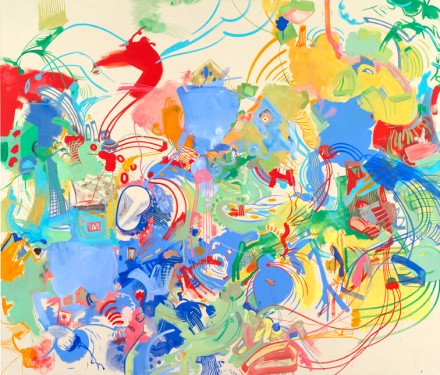 Related Links:
Exhibition Page [303 Gallery]
Art in America [The Sum of Its Parts: An Interview with Sue Williams]

This entry was posted on Saturday, February 15th, 2014 at 12:00 am and is filed under Art News. You can follow any responses to this entry through the RSS 2.0 feed. You can leave a response, or trackback from your own site.