Jackson Pollock Painting with Dark Past Goes on Sale 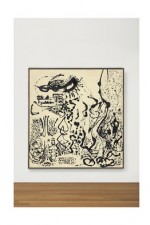 One of two paintings exchanged by artist Jackson Pollock for the convertible he ultimately crashed and died in will be on sale at Christie’s later this year, the Wall Street Journal reports.  Pollock reportedly exchanged his work Number 5 (Elegant Lady) for art dealer Martha Jackson’s Green Oldsmobile, which he crashed two years later.  The work is valued between $15 million and $20 million.

This entry was posted on Monday, March 24th, 2014 at 1:52 pm and is filed under Art News. You can follow any responses to this entry through the RSS 2.0 feed. You can leave a response, or trackback from your own site.