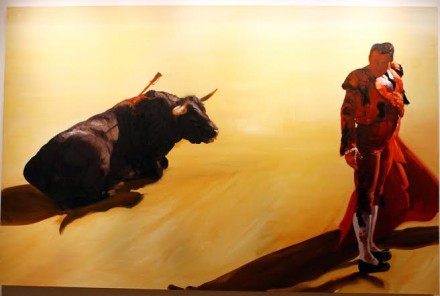 The New York Academy of Art is currently presenting The Big Picture, a brief series of large-scale paintings by five artists who embrace the challenge of large-scale canvases and epic scenery.  Curated by Peter Drake, the show has selected works from Neo Rauch, Mark Tansey, Vincent Desiderio, Jenny Saville and Eric Fischl for the show, inviting a comparative look at the varying techniques and approaches to painting on a grand scale.

Vincent Desiderio, Quixote (2008), via Elene Damenia for Art ObservedIt’s a smart move for the NYAA to keep the show somewhat small, as the sheer size of these images frequently demands a lingering view for each one.  The richness of color and the fullness of form explored in Mark Tansey’s work here welcomes a nuanced dialogue between detail and grandiosity; small cracks and crags of rock play off against the impressive athletics of his mountain climbers, while creating a strangely geometric arrangement on the canvas. 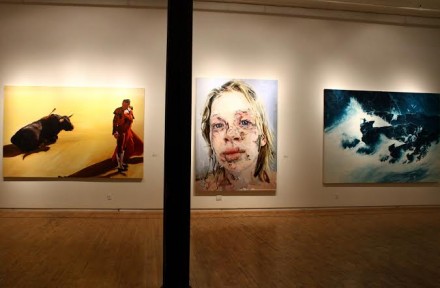 But as much as the show is about size, a subtext on space is equally present, particularly in Eric Fischl’s two works on view.  The works are defined less by their respective pairs of subjects, but rather by the charged space between them, which he fills with a delicate, pervasive yellow light.  The resulting oppositions are at turns comic and striking, particularly in the work from his Krefeld Project series, in which his nude subject is awkwardly juxtaposed against a closely placed vase of flowers.  Jarringly off-center, the viewer must constantly refocus, deciding which side of the canvas is more worthy of attention.  Conversely, Jenny Saville’s enormous, close-up portrait piece Bleach demands the viewer’s attention by leaving almost no room to breath. 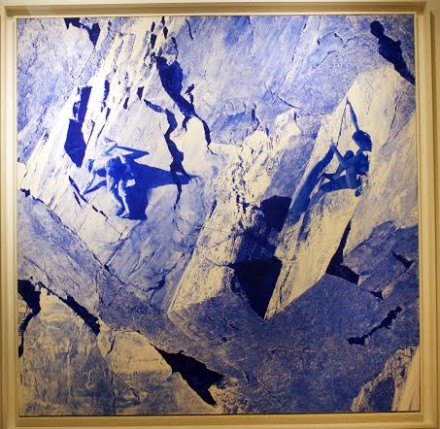 Strangely enough, the remaining works seem to carve out a niche of their own, challenging linear narrative forms in favor of pastiched, surreal constructions on canvas.  Desiderio’s long, sprawling montage of images is a strong example, using his respective images to create an elusive narrative across the piece, while Neo Rauch’s Hausmeister places his various elements into close proximity, allowing the interlocking meanings of each piece to create a puzzling symbolic whole. 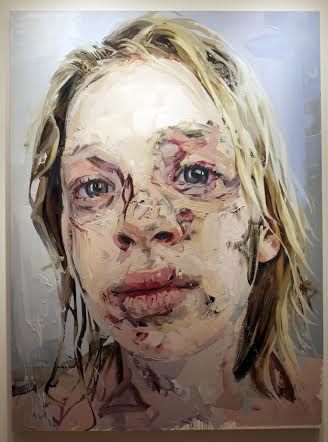 Compiling a strong selection of works, Big Picture is an interesting look at an often underestimated stylistic choice in contemporary arts, and welcomes multiple points of entry into the works on view.

This entry was posted on Saturday, March 1st, 2014 at 12:00 am and is filed under Art News. You can follow any responses to this entry through the RSS 2.0 feed. You can leave a response, or trackback from your own site.