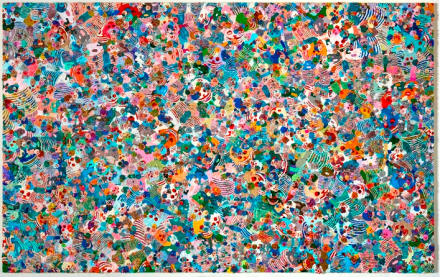 One of the most influential and prolific contemporary artists from China, Zhang Huan has worked across a wide spectrum of practices including performance, installation, photography and sculpture, reflecting his personal history as well as the collective consciousness of the present society.  As a body artist, Huan has delivered performances in which he pushed the limits of physical and psychological endurance, echoing the issues such as war, social injustice and alienation while simultaneously commenting on concepts of spirituality and transcendence. Using his own body as his main tool along with different materials such as blood, meat, brushwood and live animals, he has given impressive and challenging performances in different art institutions around the world, provoking the viewers to contemplate on issues that are often ignored and avoided. 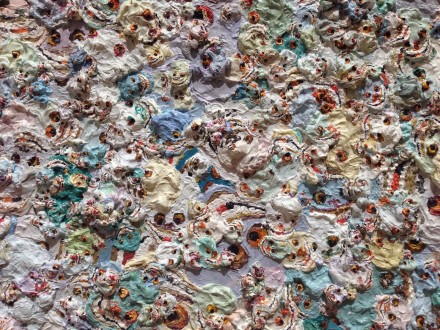 Zhang Huan, Spring Poppy Field No.14 (detail) (2014), via Pace Gallery LondonFor his current exhibition at Pace Gallery’s London location, Huan is appealing to a different medium to transfer his familiar artistic motifs. Titled Spring Poppy Fields, the exhibition combines fourteen oil on linen works, all in sharp and alluring colors, that the artist made in last three years. Huan’s trips to Tibet, Nepal and India are the main influences behind these large scale works.  Recalling the pointillist technique, and requiring extreme detail oriented work, Huan applies thick oil paint heavily onto the surface to obtain an illusionistic appearance on the linen. Seeming to be harmonious medleys of vibrant colors such as pink, teal, dark blue or lilac from a certain distance, when observed from close, these colors separate into faces of skulls along with ribs, evacuating abstraction in favor of figurative depiction. Seemingly scattered and loosely placed onto the linen, these skulls thrill and appall with their abrupt appearances. 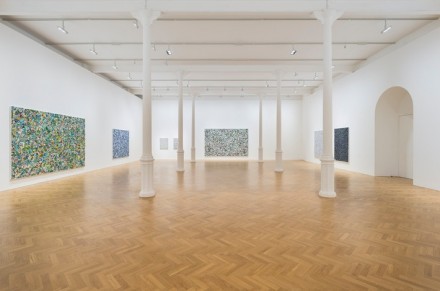 The vivid, lively colors of the paint used for the depiction of the skulls contrast sharply with the dreariness of death and perishing that Zhang expresses here. The difficulty of connecting dead faces with exuberant colors challenge the onlookers as skulls gradually become detectable as one nears the works. The ribs on the other hand, dive deep into the canvas, composing a harmony for the skulls to be accented and noticeable. 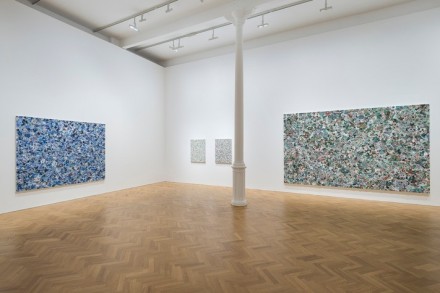 Having used actual skulls and ribs previously in his performances, in this exhibition Huan prefers the representation of skulls as depicted through his impressionistic vision. Adapting the poppy as his inspiration, Huan ties references to the most common connotation of poppies, being the source for opium and eventually the hallucinatory state it brings about. Besides being a common opiate for artists and writers, poppy has been a widely apparent figure in Tibetan belief as the symbol of endless deaths, suggesting a cycle of birth, death and rebirth.

Zhang Huan: Spring Poppy Fields is on view at Pace London through May 31, 2014 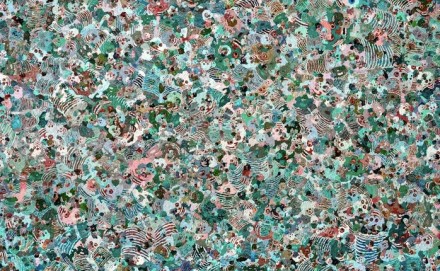 This entry was posted on Monday, May 26th, 2014 at 12:00 am and is filed under Art News. You can follow any responses to this entry through the RSS 2.0 feed. You can leave a response, or trackback from your own site.