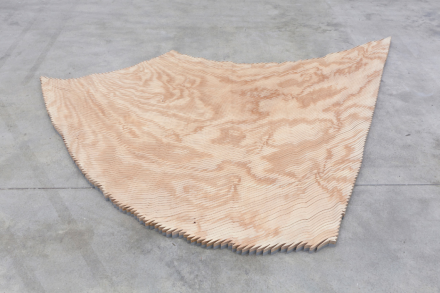 On view currently at ICA London is the first solo exhibition in the UK by New York-based artist Tauba Auerbach. Entitled The New Ambidextrous Universe, the exhibition is composed of her recent works in sculpture and photography, focusing on themes of symmetry and reflection as scientific principles, hinting at the existence of a mirror universe. 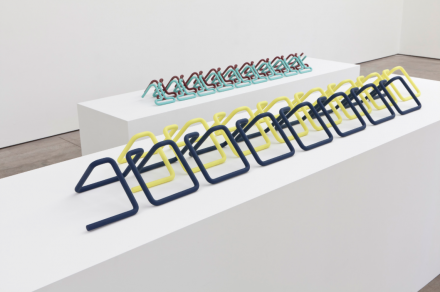 Taking extremely complex scientific theories and interpreting them through unique sculptures and photographs, the current exhibition is an ambitious project made to portray the ways in which mirroring and reflecting are natural phenomena in the microcosm of our everyday human life.  Auerbach has long been interested in these potentials for objects in the art context, and makes frequent use of algorithmic patterns, materialist emphases (as in her New Ambidextrous Universe series, where she uses wood grain from stacked slats to create shifting, illusive patterns), and smooth, digital aesthetics to create an otherworldly space from simple objects and pieces. 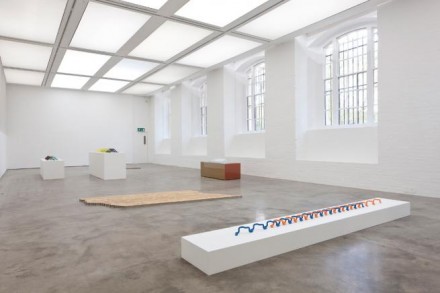 Auerbach’s show at ICA then, is intriguing for the amount of space provided, and the minimalist elements that her work takes on in the expansive room of ICA.  Given room to breathe, Auerbach’s small set of works offer moments of reflection, hints at the artist’s broader practice, while pulling the viewer into the rhythmic, often hypnotic repetitions of her work.  Each piece is a world of its own, an internal logic that Auerbach could continue ad infinitum, adding a musicality, a durational act of composition, to its presentation. 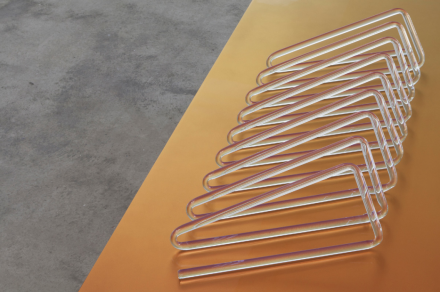 In the past few years, Auerbach has had recent solo exhibitions at Standard, Oslo (2013); Wiels Centre of Contemporary Art, Brussels; Malmö Konsthall, Malmö; and Bergen Kunsthall, Bergen (2011 – 2012). She has participated in group exhibitions at the Museum of Modern Art, New York (Ecstatic Alphabets/Heaps of Language, 2012); Museum of Contemporary Art, Los Angeles (The Painting Factory); and Walker Art Center, Minneapolis (Lifelike).  The exhibition will be accompanied by a publication entitled Tauba Auerbach – The Unidextrous Ambiverse, and  will remain on view at ICA London through June 15, 2014.

This entry was posted on Wednesday, June 11th, 2014 at 12:00 pm and is filed under Art News. You can follow any responses to this entry through the RSS 2.0 feed. You can leave a response, or trackback from your own site.