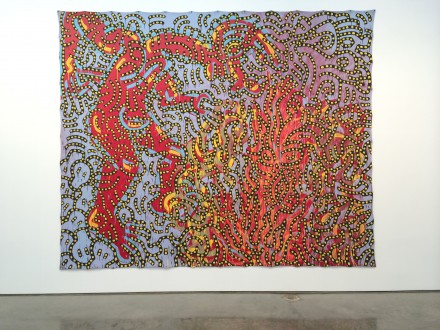 Keith Haring, Moses and the Burning Bush (1985), via Art Observed

On view at Gladstone Gallery is an exhibition of large-scale works by Keith Haring, including canvases and tarps painted in the artist’s immediately recognizable style, which has since become part of a widely reproduced visual language of the late 20th century. The display will remain on view through June 14, 2014. 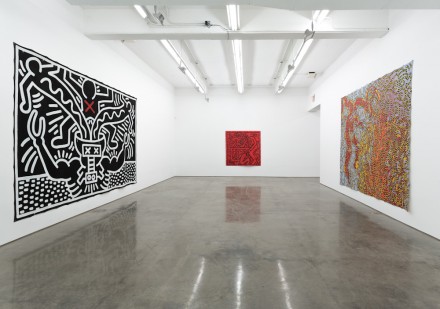 Haring first gained recognition for his graffiti work, much of which he created in the New York City subway system, before going on to achieve a formally-recognized and populist aesthetic within the gallery system, featuring bold, bright colors and figures that appear to move about the canvas. On first glance, the works seem playful and celebratory, but Haring’s politically active and socially conscious work also responds to the intense cultural environment of New York City in the 1980s. His works approach themes of sexuality, technology, capitalist greed, and the AIDS virus from which he and many of his friends suffered and died. 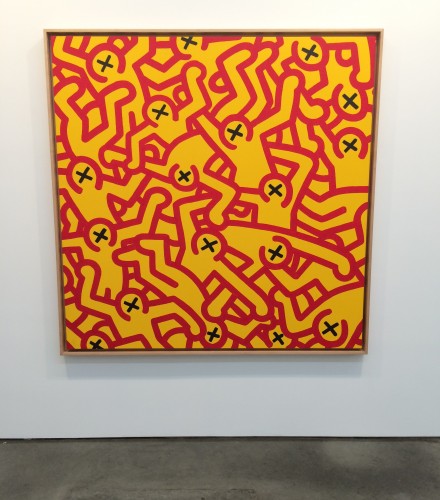 As his works received public recognition and even commercial attention, Haring was at first hesitant to extend his work into the sphere of capitalism, and decided to create a multitude of works to keep the prices of his work low rather than “just paint a few things and jack up the price.” He later created several pop art pieces influenced by products like Absolut Vodka, Lucky Strike, and Coca Cola, but Haring was most interested in working with ideas about openness toward homosexuality, HIV/AIDS activism, anti-Apartheid, and the crack cocaine epidemic present in his social environment. 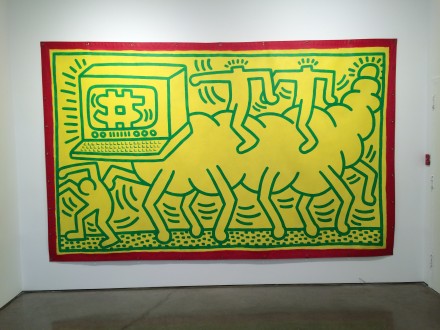 Many of Haring’s figures appear to be dancing and bursting with energy, sometimes composed of extra limbs and numerous heads, wings, or fins. The bold black curved lines around the figures suggest constant movement and energy, reflective of Haring’s own personality and working style. In a rare video of Haring at work, viewers can see his energetic style of painting. He later wrote: “I am becoming much more aware of movement. The importance of movement is intensified when a painting becomes a performance. The performance (the act of painting) becomes as important as the resulting painting.” Other works are less celebratory and more dark: scenes of monsters, skeletons, and beasts, with images of penetration in the sense of rape, sexual compulsion, and castration are also often found in his paintings. 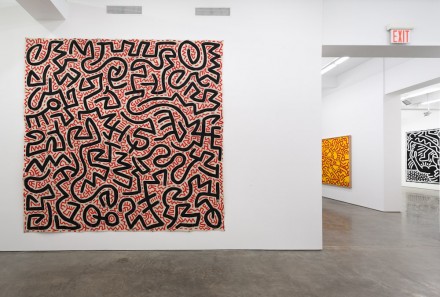 Later in his life, after watching several friends die of the virus he also suffered from, the appearance of movement in the works dwindled. One haunting image in particular is the 1986 work Untitled, in which his classic, outlined human figures lie piled on top of one another with symbolic black x’s over their faces. On March 20, 1987, Haring wrote “I’m scared of having to watch more people die in front of me…I refuse to die like that. If the time comes, I think suicide is much more dignified and much easier on friends and loved ones. Nobody deserves to watch this kind of slow death.” 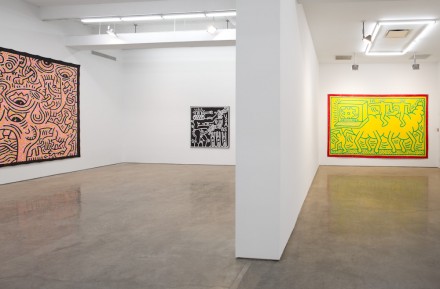 After 1988, nearly all of Haring’s works focused on male sexuality, featuring the image of the horned sperm drawn in white on a black background, symbolizing the bane of his otherwise exuberant existence: death as a result of physical love, or a deathly threat to the expression of love.  For Haring, the act of expression, of love or creativity, is inherently bound up in this destruction, the expression of death as a counterpoint to that of life.  It’s just this dichotomy that makes his images so powerful.

The current exhibition at Gladstone Gallery will continue through June 14, 2014. 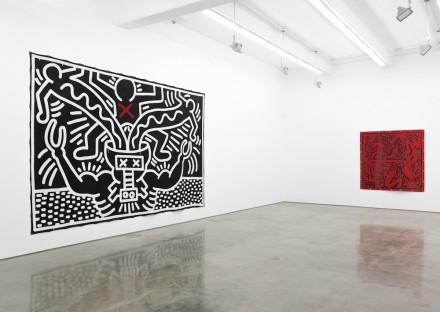 This entry was posted on Saturday, June 7th, 2014 at 12:00 am and is filed under Art News. You can follow any responses to this entry through the RSS 2.0 feed. You can leave a response, or trackback from your own site.