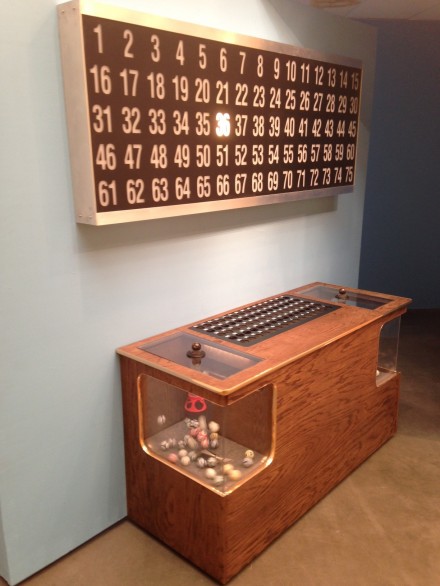 Mika Rottenberg’s artistic practice has long focused on the production methods and social schemes of contemporary work, orchestrating structurally perfect and visually playful videos in which actresses specifically cast for their physical looks twist the notion of productivity. Using meticulously planned and often vague plots, Rottenberg contemplates on the “nature” of making things in her videos, usually installed along with the pieces used in the production of the video. 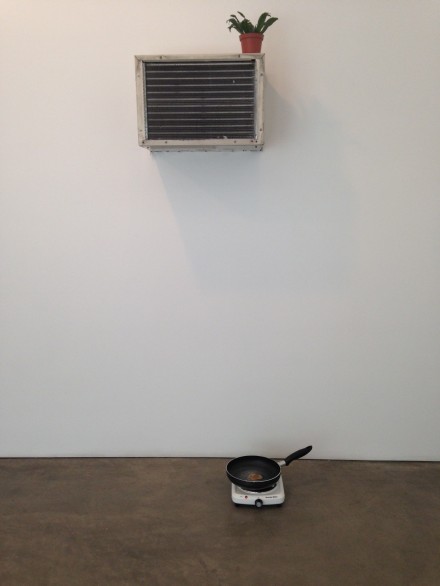 Mika Rottenberg, Tsss Tsss Tsss (2014), via Osman Can YerebakanFor her first exhibition at Andrea Rosen Gallery, titled Bowls Balls Souls Holes, Rottenberg builds a mostly phantasmagorical atmosphere extending beyond the video into the installation it is played in. Set in a Harlem bingo hall, Bowls Balls Souls Holes (Bingo) builds an alternative reality in which numbers, bingo balls and clothespins play further roles than their mundane functions. Here inside this bingo hall, different bingo balls serve as portals to another world composed of rooms connected in an unusual harmony.  Rottenberg who is known for employing women of different sizes, colors and manners in her videos, once again brings together different body shapes and racial backgrounds, often blurring the line between the reasonable and the absurd. Present in the center of this other world, accessible through a series of shifting and moving compartments is a man continuously and methodically clipping clothespins to his face. 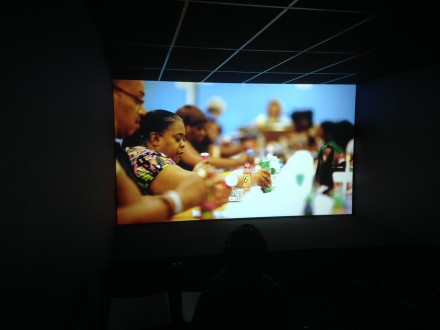 Strongly tied to her previous video installations, such as Cheese (2007) in which extremely long-haired women milk cows and make cheese using a machine powered by the movement of their long hair, or Mary’s Cherries (2004) in which a woman’s extremely long finger nails are clipped and then formed into maraschino cherries, Rottenberg pushes the limits of reason and logic, using common materials in unorthodox ways.  Blending eerie and occasionally irritating images into her argument, she transforms the familiar into the foreign. Fingernails, hair, dough or bingo balls stand out as foreign and distant objects that provoke and confuse the viewers. 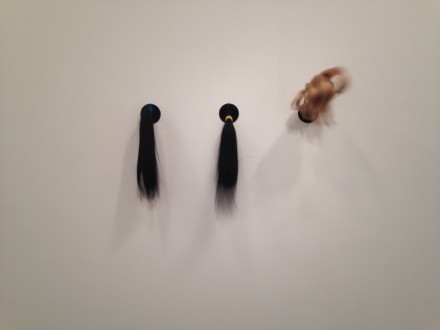 The video, at its core, also transforms the production of her adjacent works, using the thematic movement of the original video to restage the props and devices as art objects in their own right. In fact, the show is accessed through a rotating wall, turning to expose a bingo callers’ table that offers an entrance to the gallery as it turns.  Other works accompanying the video installation include Tsss Tsss Tsss, an air conditioner that is constantly dripping water onto a frying pan, or Ponytails, a set of three ponytails exposed through holes in the wall and continually flipping, suggesting further attention to explore the hidden, ignored and uncanny details evident in the ordinary and familiar.  Movements and acts that are dismissed in the course of time are redefined and rendered, asking the viewers to contemplate further on the mundane. 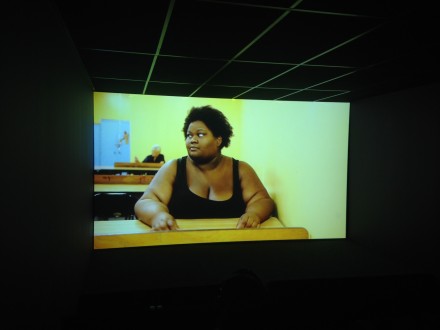 This entry was posted on Thursday, June 12th, 2014 at 12:00 am and is filed under AO On Site. You can follow any responses to this entry through the RSS 2.0 feed. You can leave a response, or trackback from your own site.