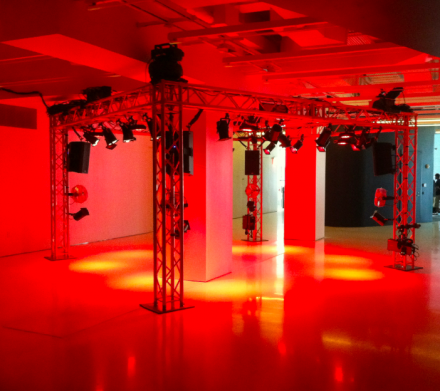 Given the recent string of shows and events opening at Red Bull Studios’ New York location in Chelsea, one has to wonder just who the energy drink brand has recruited to curate it’s well-appointed space. From the recent DISown concept store to Peter Coffin’s just-opened “Living” installation, the selection of works seem wholly of a similar focus and artistic project. 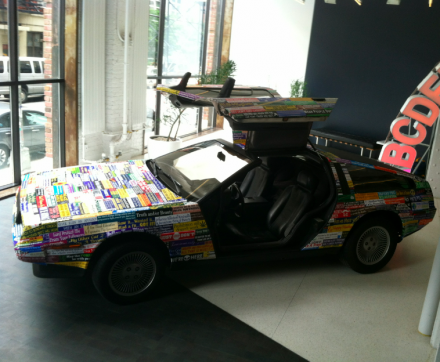 Coffin’s “Living,” which opened on June 18th, is perhaps the perfect follow-up to DIS’s retail irreverence, pushing the same ideas of object-centered work and retail materialism back towards the high-art ready made, much the way his forebears at RBS did the reverse.  Borrowing liberally from the language and thematics of the object-oriented ontology school of philosophy, the artist and RBS pepper the descriptions of the work with ideas of objects as living, or rather, given their own space to understand their relation to other objects, no longer prioritized for human understanding, but rather set afloat in its own hierarchy of “things.” 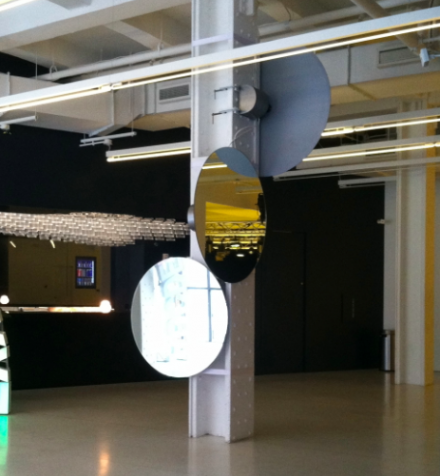 The free-market serves as Coffin’s muse here, and he draws liberally from the heavily commoditized “brand identities” that populate contemporary commercial jargon.  A Delorean is placed prominently as if in an auto showroom, but covered in pithy bumper stickers, leaving it locked between product and object through its flattening of time (Coffin’s use of a modern stereo inside the car dashboard is a fitting choice). Elsewhere, he makes explicit reference to his installation location, offering free “Whalecum Popcorn” in a winking send-up of the free Red Bull drinks available around the space. 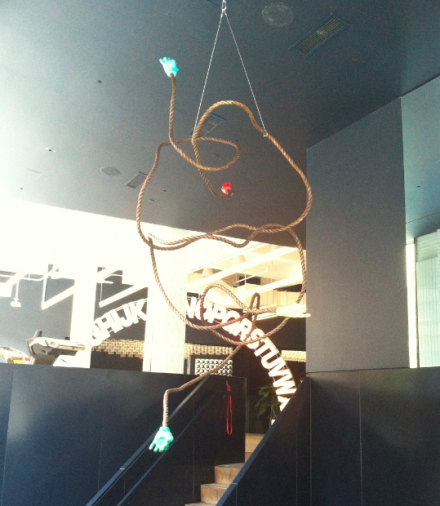 It’s this infusion of real advertising with Coffin’s lampooning that throws the focus of the show off-balance. Occasionally leaving an uncomfortable amount if distance between pieces, the viewer must take a fridge of complimentary energy drink at equal weight as an enormous neon lighting array, with the distinction between promotion and creation becoming more muddled along the way.  If Coffin succeeds here, it’s in his ability to get forth his own artistic agenda while unveiling the commercial bounds of the installation, and making the case for both sides. Similar to contemporaries like The Jogging, Coffin has no problem with commercialism, but seeks bringing its full implications and effects on the art object to bear, uncovering the mechanisms as he lets the work itself unfold. 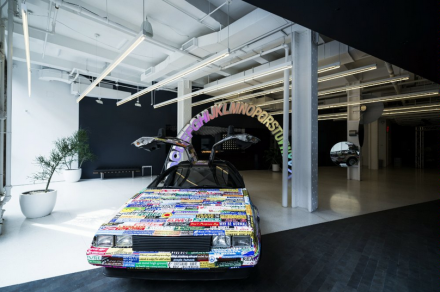 Ultimately, placed in this context, Coffin perhaps uncovers part of what makes the contemporary art lexicon so compelling for practicing artists today.  In a world where commercial branding strives so hard to create a space for itself as a “thing” in and of itself, moving from product to self-contained ideology, the object itself in turn brings a wealth of new signifiers into play, lifestyle commodities that can take on a life of their own given a loose enough context, and perhaps a little extra nudge from the artist at work.

“Living” is on view at Red Bull Studios through September 16th. 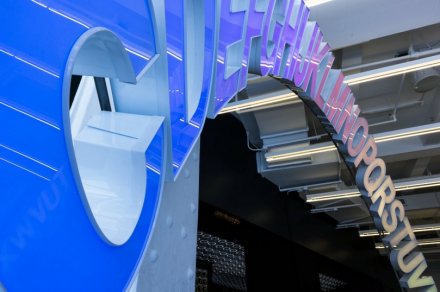 This entry was posted on Tuesday, June 24th, 2014 at 5:18 pm and is filed under Art News. You can follow any responses to this entry through the RSS 2.0 feed. You can leave a response, or trackback from your own site.