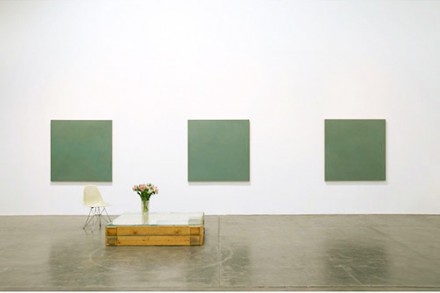 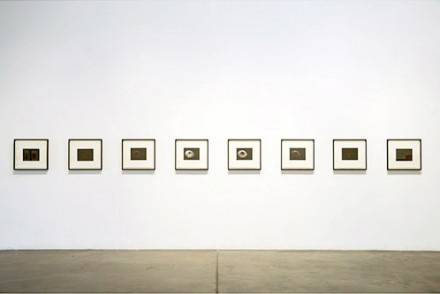 Throughout, the works on view explore intersections of domesticity, persona and practice, using works and artists who frequently explored the possibilities for art as a negotiation with the meanings of everyday life.  For example, Christopher Wool’s Incident on 9th Street uses photographs the artist took of fire damage in his studio for an insurance claim, and later published as artwork, using the aesthetics of bureaucratic paperwork and natural disasters in equal parts to create a dissonant, jarring series of images. 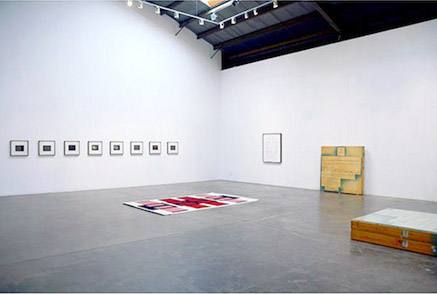 Titans of the Stratosphere (Installation View)

Rodney Graham’s photogravure stills Coruscating Cinnamon Granules were taken from his 1996 film of the same name. For the film, the artist scattered crushed cinnamon onto a stovetop burner, and filmed the glowing result. The work was inspired by a realtor’s strategy used to make homes smell warm and inviting.  The stills are black and white abstractions, specks floating in black space without a context, leaving a question of whether the objects are macrocosmic objects floating in space or microcosmic bacteria only able to be seen under a microscope. 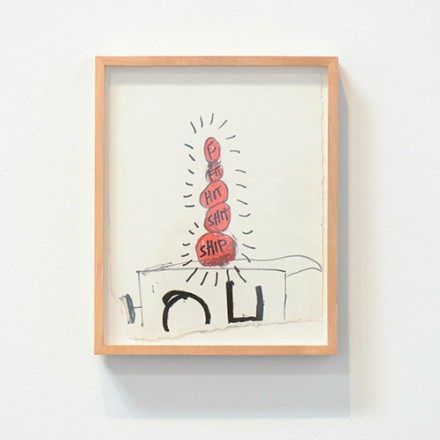 Stephen Prina’s 1994 work, Monochrome Painting: A Posterior Prototype: Average Size refers to his 1989 installation The History of Monochrome Paintings presented at the Renaissance Society in Chicago, which consisted of a painting and a corresponding crate. If a painting is purchased, the new owner of the work is permitted to place a crate perpendicular to the wall as a “bookcase,” and if two paintings are purchased, the owner can use an additional crate and a sheet of glass to create a table within the installation. The installation highlighted the underlying physical and financial structures which (literally) support the public display of art. 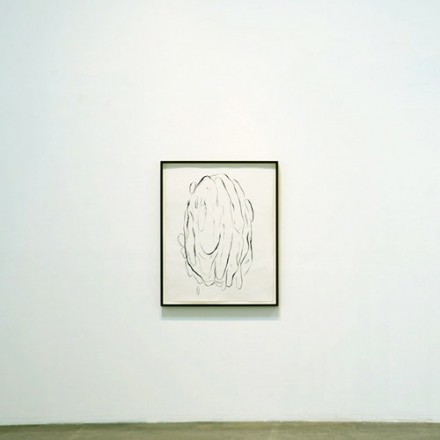 Andrea Zittel’s ongoing series A-Z Enterprises “explores the complex definitions of objects,” drawing attention to the distinction between art as a conceptual object and design as a functional object, as well as representation as illusion as opposed to literalism as an actual object. Here, she selects one of her designs and places it on a carpet, turning her minimalist abstraction into a functional piece of home decoration.

“Titans of the Stratosphere” opened on June 14th at Patrick Painter Los Angeles, and the show has been extended two weeks to run through July 26, 2014. 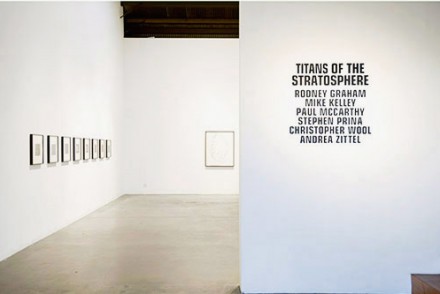 Titans of the Stratosphere (Installation View)

This entry was posted on Tuesday, July 22nd, 2014 at 12:00 pm and is filed under Art News. You can follow any responses to this entry through the RSS 2.0 feed. You can leave a response, or trackback from your own site.