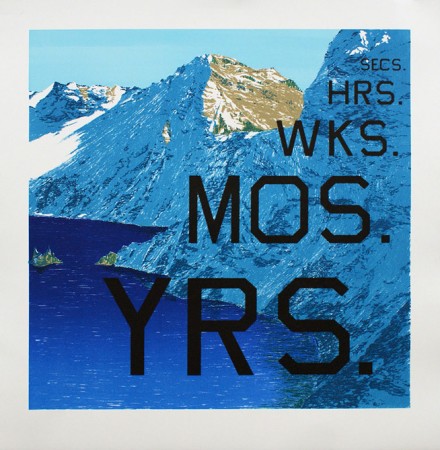 On view at Gagosian Gallery in New York is a survey of prints and rarely seen photographs produced by Ed Ruscha from 1959 until the present. The exhibition was organized by Gagosian’s director Bob Monk, and will remain on view through July 11, 2014. 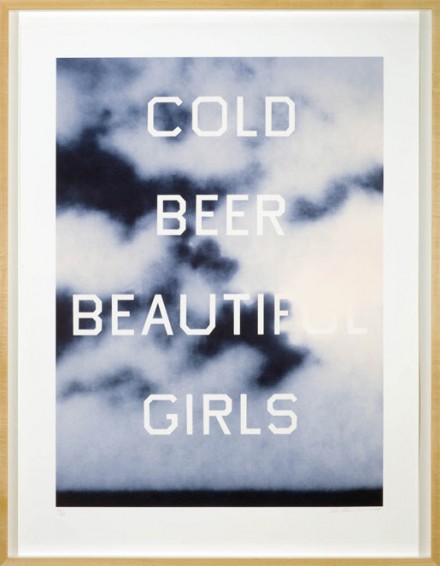 In 1956, Ruscha arrived in LA to study commercial art at the Chouinard Art Institute, which has since become CalArts, and beginning in 1958 he participated in a 6-month apprenticeship with a printer. He was attracted to the happy accidents, reproducibility, and collaborative processes that go along with printmaking, and after the apprenticeship he went on to create a wide variety of works ranging from very formal text and typography, still life and quotidian architecture, as well as pop art and conceptual sensibilities using experimental materials. 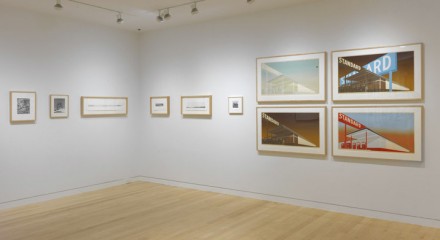 Ruscha was also heavily influenced by the Hollywood film industry, and gained notoriety for his word paintings that draw attention to typography, as well as his experimentation with unconventional materials to use in his prints, including gunpowder, vinyl, blood, wine, fruit and vegetable juices, axle grease, chocolate syrup, tomato paste, cherry pie, daffodils, raw eggs, and grass stains.  Ruscha also made a short film, Miracle, which inspired him to use photography as a basis for his prints for the first time. During that period, in 1975, he created the work Tropical Fish Series – banal images on elaborate fabrics, and Air, Water, Fire, depicting a bicycle pump, seltzer bottle, and Satan statuette. These objects were photographed and then silkscreened. He has also depicted gas stations along route 66 in Twenty Six Gas Stations, and Roof Top Views (1961), photographs of local suburban streets from high vantage points. 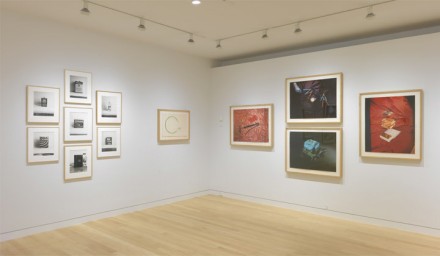 Presented at Gagosian, the collection of prints and photographs on view offers a striking historical context for Ruscha’s work, collected and displayed in various series and time frames that allow the visitor to move from one era to the next, and to watch the intersection of various ideas, thematics and material concerns from one work to the next.  Ruscha’s masterful incorporation of his material interests into a cohesive body of works here underlines the artist’s persistent artistic vision, even as he moves from technique to technique. 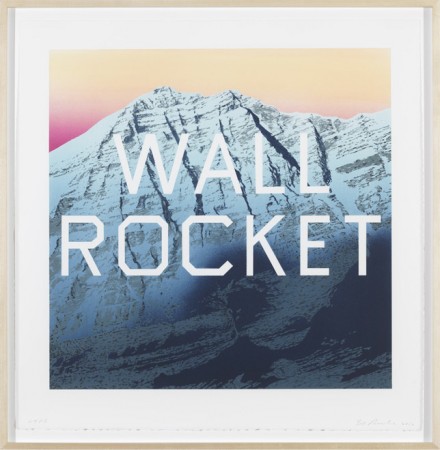 Ruscha’s body of work is immense and varied, and he has been the subject of solo and group exhibitions at major museums and galleries worldwide for over 4 decades. Most recently, his first public commission was unveiled at the High Line in New York City, and will remain on view there through May 2015.

The current exhibition, Ed Ruscha: Prints and Photographs, will remain on view at Gagosian through July 11, 2014.

This entry was posted on Thursday, July 10th, 2014 at 12:00 am and is filed under Art News. You can follow any responses to this entry through the RSS 2.0 feed. You can leave a response, or trackback from your own site.