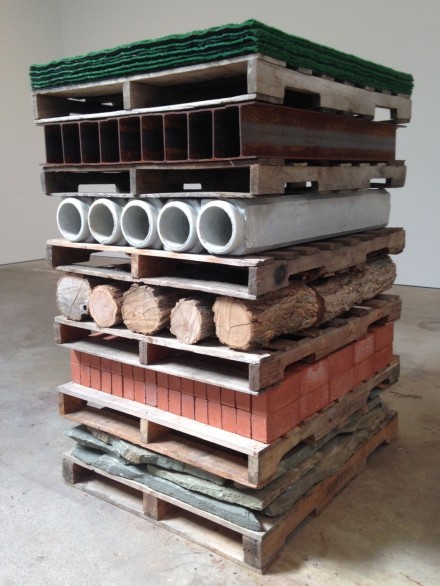 Seeking to understand the various materials and objects utilized in contemporary art To do as one would is on view at David Zwirner’s 19th street location this month. The exhibition, brought together by three staff members at the gallery, uses the full space provided to host a selection of works aiming to investigate the broad understanding of alternative materials as applied to various bodies of thought and execution. 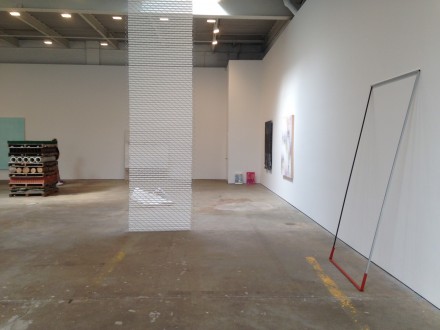 To do as one would (Installation View)

Adapting its title from political economist and thinker John Stuart Mill’s theory of utilitarianism in social and economic politics, the exhibition contemplates the application of construction materials that, prior to being drawn into the artistic domain, have real industrial purposes. Used in various environments for different necessities, objects such as wood, wire mesh, coins, cement or glass are repurposed in these works of art, gaining distinct aesthetic values beyond their roles as the agents of certain creative discourses. 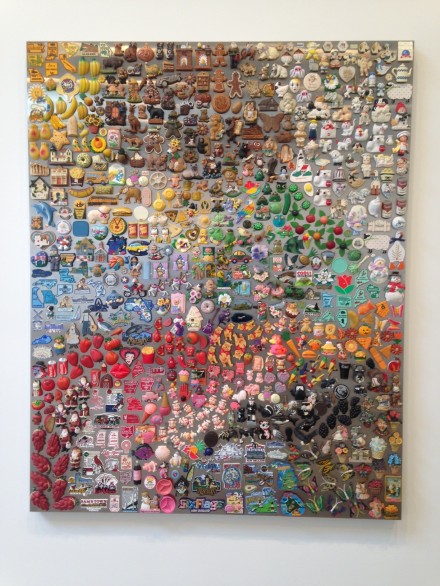 Showcasing four Hamilton Beach kitchen appliance packages printed on transparent acrylic surfaces, Zak Kitnick’s Hamilton Beach series, for example, suggests a connection between the act of shopping, the performative aspect of consumerism, as well as the alternative aesthetic the related commercialism generates.  By making subtle changes to the materials and context, the artist reshapes the familiar graphic design and meaning of these boxes. Similarly so in Pallets, Charles Harlan’s stack of neatly stacked brick, wood, astro turf, stone and concrete that results in a peculiarly harmonious sculptural assembly, ruggedly gracing the exhibition space and delivering a color palette of basic industrial colors. 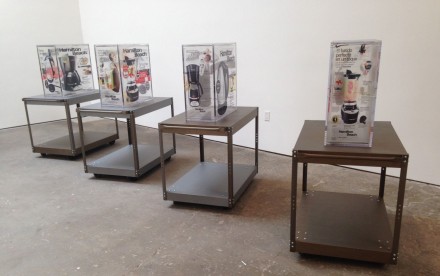 Still House affiliate Nick Darmstaedter comments on the relation between consumerism and its tie to kitsch with Donks, a large menagerie of fridge magnets, common to any random kitchen, placed on a steel surface similar to a fridge door, and arranged based on color harmony, giving the slight impression of a human figure to ridicule the perception of viewers with its over the top assembly.  Nearby, Harry Schleiff articulates on the impact of mass media and industrialism through a series of cement blocks with New York Times’s T Magazine covers slightly transposed on them. The barely visible cover designs on these rough and crude constructional materials orchestrate a contrast with the ephemerality of data in today’s media, embodied through these covers.

The merging of everyday utilitarian objects with unprocessed construction materials is a repeating concept throughout the exhibition, apparent in works such as Never Ending Tomorrow, Violet Dennison’s assembly of artificial plants, diamond mesh, burlap, cement and an office chair, adding a contemporary touch on the notion of ready-mades while blurring the distinction between the consumerist modern lifestyles and raw materials. Benjamin Horns’ collage of thread, zippers, enamel, bleach and dye results in a form carrying multiple layers of process and production materials. Applying commercial materials such as zippers and thread on fabric from IKEA along with enamel (a more common art material), the artist creates a haunting example of abstraction through methods of creative production and utilitarian objects. 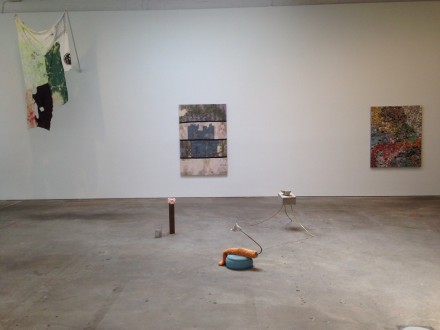 To do as one would (Installation View)

Serving as an inspiration and starting point to the exhibition is Christopher Williams’ Hortenkachel, a photograph capturing a single brick of the namesake mass manufactured bricks in Germany in the 1960s. Separated from its functional purpose of creating air flow for the interiors, the single concrete brick Williams aestheticized fully summarizes the concept behind the show. 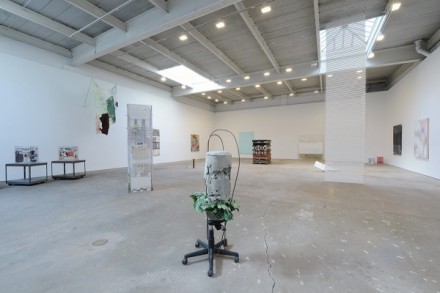 This entry was posted on Wednesday, July 23rd, 2014 at 12:00 am and is filed under AO On Site. You can follow any responses to this entry through the RSS 2.0 feed. You can leave a response, or trackback from your own site.